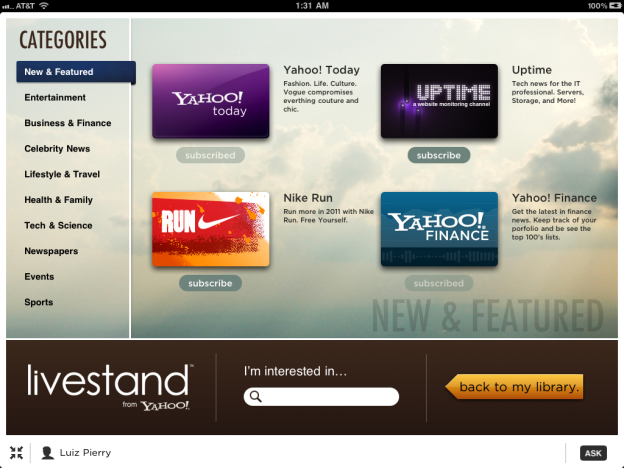 Yahoo’s been in something of a downward spiral in the wake of rumors that it’s up for sale and the recent firing of former CEO Carol Bartz. Since then, the company has done little more than deny rumors its up for grabs or interested in an AOL merger, and insisted that a plan is in place to resurrect Yahoo to its former glory.

Now we’re getting a glimpse at the products behind Yahoo’s hoped-for revival. The most notable launch is Livestand, an HTML 5-based Flipboard competitor that collects Yahoo’s curated content in a zine-like style for the Web. Content from the likes of ABC News, Scientific American, Mashable, Forbes, Power, and Parenting will be included.

According to the company, an Android version of the currently iOS-only app will be available in 2012. Yahoo isn’t the first Web property to take on Fliboard: In fact, Google is rumored to introduce its Flipboard challenger soon.

But can it compete with Flipboard? The app has a stranglehold on mobile reader services, and were Livestand a clone of the software, we could understand some natural success. But there are a few, key differences that could hinder this. First, Yahoo does all the work for you with Livestand: Your options exist within Yahoo’s content aggregators. Flipboard’s setup is truly based around personalization. In essence, Flipboard remains the best choice for active, hungry, mobile readers. Livestand might be a good attempt, but it reeks of third-party partnerships and ad schemes.

Still, Yahoo is reestablishing itself as a media company, and Livestand is a product that signals a step in the right direction. Also launched today were new features for Yahoo News that allow users to discover and interact with content and other readers more easily. Yahoo Weather also recieved a small makeover in the form of a new Android app that will pull corresponding photos from Flickr.

The other iOS feature introduced today is the iPad version of IntoNow, which reads the TV content you’re watching and pulls news stories based on their relevance to the programming.

Video-editing app LumaFusion to get a Galaxy Tab S8 launch
iOS 16’s infuriating copy-and-paste permission pop-up is being fixed
The best voice-recording apps for Android and iPhone
How to download movies and shows from Amazon Prime Video
How to filter unknown senders in text messages on iOS 16
How to use the Galaxy Z Fold 4’s massive screen without losing your mind
Best Phone Deals: Save on Google Pixel 6, Galaxy S22 Ultra
Does the iPhone 14 have a 120Hz display?
How to transfer WhatsApp messages from Android to iPhone
Best cheap Fitbit deals for September 2022
The Uber hack is an outrageous tale of a teen hacking for fun
The best Samsung Galaxy S22 screen protectors for 2022
LG’s doomed Rollable phone appears on video to show us what we missed