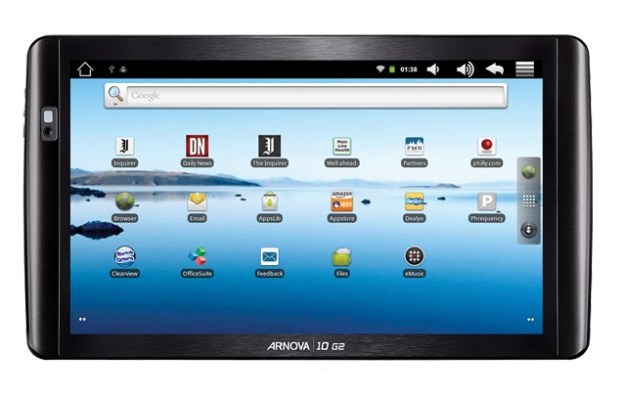 Philadelphia’s news junkies will have a chance at a $99 tablet deal courtesy of the Philadelphia Media Network, the parent company behind the Philadelphia Inquirer, Daily News and Philly.com. The subsidized tablet requires subscription to the Philadelphia digital papers and will come equipped with apps specific to the company’s publications.

Philadelphia Media Network’s promotion to embrace the digital was announced back in July. The subsidized tablet promotion is currently in beta, so it will be limited to the first 5000 who want the product. Along with the pre-installed newspaper apps, subscribers will get access to a multimedia app with expanded picture galleries and videos. The promotion begins September 13 and may be expanded when Black Friday comes around.

The actual tablet that PMN settled on is the Arnova 10 G2, an ANDROID 2.3 Gingerbread tablet manufactured by Archos. The Arnova 10 G2 has itself a 1 GHz porcessor, 512 MB of RAM, a screen resolution of 1024 by 600, 4GB of online storage as well as Flash support.

Is Philadelphia another harbinger of a paperless future? The Tribune also announced a transition to the digital via tablets this month. However, rather than using existing tablets as PMN did, the huge Tribune news corporation is having Samsung build a unique tablet for them and expects to have a trial run soon.

Print publishers are also in talks with Amazon about a creating a digital library of books, with a Netflix-like subscription service. Another print publisher, DC comics, recently announced a reboot of its entire line of titles to make itself more relevant to the digital age. It seems like only a matter of time before paper and ink are relics in our history e-museums.

Video-editing app LumaFusion to get a Galaxy Tab S8 launch
The best gaming tablets for 2023
The best Android apps in 2023: the 50 apps you need to download
Lenovo has the cheap tablet you’ve been looking for (while this deal lasts)
The best Samsung tablets in 2023: our 6 favorite picks
Watch the Galaxy S23 Ultra get unboxed a week before launch
The best iPhone apps in 2023: 50+ apps you need to download now
The iPhone 15 Pro’s rumored new design is one I can’t wait for
The best folding phones in 2023: our 6 favorite foldables right now
You can finally take ECGs and track AFib on a Garmin smartwatch
I bought a $50 Apple Watch Ultra clone, and it blew me away
Best cheap phones in 2023: our 5 favorite ones for tight budgets
How to get Apple’s Black History Month 2023 wallpapers for your iPhone and Apple Watch