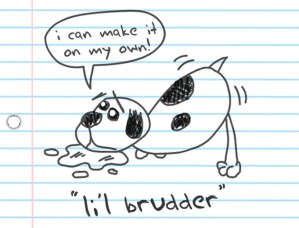 It hurts to be left out. This holiday season T-Mobile is the only major wireless carrier in the United States that doesn’t have the iPhone 4S, and it’s a bit mopey. So mopey that its marketing department issued a press release today without any real point except, well, to sound bummed out. No new products or services were revealed in the statement, which seems to exist solely to bring up the fact that T-Mobile is not getting the iPhone.

T-Mobile thinks the iPhone is a good device and we’ve expressed our interest to Apple to offer it to our customers. Ultimately, it is Apple’s decision. The issue remains that Apple has not developed a version of the iPhone with technology that works on our fast 3G and 4G networks. We believe a capable version of the iPhone for our 3G and 4G networks would offer an additional compelling option for our customers on a fast 4G network. However, the iPhone is not the only option to experience the benefit that smartphones offer.

T-Mobile’s 4G smartphones stack up against competitive smartphones in terms of functionality, speed, features offered and overall experience – including the iPhone 4S. Reports continue of iPhones not operating well on some carrier networks, while our latest 4G smartphones offer many advantages vs. the iPhone 4S:

We firmly believe that T-Mobile’s portfolio will give any iPhone a run for its money….With our portfolio of Android, Windows, and BlackBerry smartphones, fast 4G network, and competitively priced worry-free unlimited talk, text, and data plans, we believe it’s a great time to be a T-Mobile customer.

If you read the statement like a script to a romantic comedy, it makes for some good entertainment. Here’s the plot: T-Mobile has been obsessed with Apple’s iPhone 4S all semester. Apple flirted back for a while and the two got to know each other.  When it came time for the Fall formal, T-Mobile knew it wanted to take Apple, which is, as we all know, the prettiest girl at any dance. But when T-Mobile asked Apple to the dance, it was shut down. Rejected, T-Mobile has hatched a new plan. Now it is trying to get Apple’s attention by bragging about how much bigger, faster, and prettier its Android smartphones are than the iPhone. If this were a movie, Apple would soon get really jealous and the two would get in a huge fight, but by the end of the night Apple would jump into T-Mobile’s arms and they’d walk off into the moonlight. Sadly, life doesn’t always work that way.

T-Mobile is a fine carrier and, as we’ve said, it may have the best lineup of Android phones this holiday season, but it stings not having the iPhone, especially when the bar is so low. I mean, it’s been five years now and even Sprint got it this time. If T-Mobile is still a carrier in a year, we assume Apple may consider it for the iPhone 6, but maybe not. As long as the iPhone is the world’s most popular phone, Apple won’t be bending to please anybody. If T-Mobile’s lucky, Apple will ask it to dance next year. If not, there’s always Windows Phone…