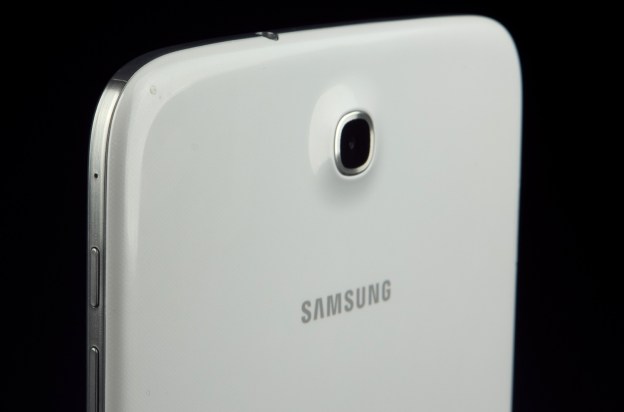 Check out our review of the Samsung Galaxy Mega 6.3 smartphone.

If you’re desperate for a big screen device that’s not a tablet, but don’t want to splash out on the Samsung Galaxy Note 2 or its small army of imitators; don’t panic, as Samsung apparently has something in the works for you. We talked about the Samsung Galaxy Mega range last week, sniggered at the name, and wondered if there was really a call for a mid-range smartphones with giant displays.

Samsung, should the rumors pan out, believes there is as the Galaxy Mega range will feature at least two models – one with a 5.8-inch screen and the other with a 6.3-inch display. Last time around, we didn’t have much to go on aside from the potential screen size and model numbers, but now a feature list has been leaked for both.

The GT-i9150/GT-i9152 Galaxy Mega is expected to have a 5.8-inch screen, but the resolution may be a lowly 960 x 540 pixels, a figure which fits in with previous speculation. The spec sheet is similarly underwhelming, as it consists of a 1.4GHz dual-core processor, an 8-megapixel camera, GPS, Bluetooth, Wi-Fi and all the other options one expects. Android 4.2.2 could be its operating system, with TouchWiz over the top.

As for the 6.3-inch Galaxy Mega, which has been linked with the GT-i9200 model number, it could also have a dual-core processor – with Exynos branding – and an 8-megapixel camera, although the screen resolution hasn’t been mentioned. The source of the rumour, an anonymous Samsung official, said the 6.3-inch device has the codename Project Mobius inside the company, and could be announced sometime in June or July.

Given the announcement of the Galaxy Win, which proves Samsung has no shame about using rubbish names, it could also decide to keep the Galaxy Mega tag around for the official launch. Oh dear.

Video-editing app LumaFusion to get a Galaxy Tab S8 launch
The best phones for 2022: Which smartphone should you buy?
The first Galaxy S23 Ultra leak is great news for S22 Ultra fans
Latest Google Pixel 7 leak reveals the full design in all of its glory
Google Pixel Watch: news, price, specs, release, and more
First Samsung Galaxy S23 design leak shows a floating camera bump
Here’s what AT&T is doing to keep your phone working during Hurricane Ian
Oura goes back to basics with its classy new Horizon smart ring design
How Spotify audiobooks work (and how much they cost)
Truecaller brings AI-powered spam call filtering to any iOS or Android phone
Pixel 7: Everything we know about Google’s 2022 flagship
The best hurricane trackers for Android and iOS in 2022
Amazon’s new Kindle Scribe turns the e-reader into the ultimate notepad