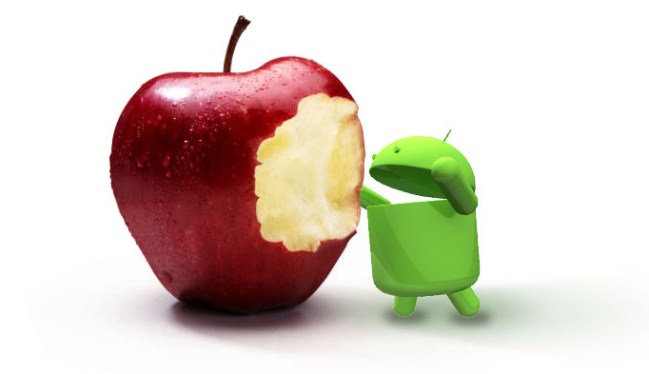 Rejoice, analysts of the world! For the next few weeks, the cell phone world is yours as everyone tries to anticipate what effect the arrival of the iPhone on Verizon will have on the market. Some think the iPhone will be greeted with a resounding “meh”– sure it will sell phones and take some market share, but when the dust settles, AT&T will be the big loser as the majority of new Verizon subscribers are simply switching carriers. Others believe that the news will shift the balance dramatically in Apple’s favor, and the iPhone will be greeted by the masses of eager fans screaming and shrieking like teenage girls in line to see Justin Bieber, leaving Android crushed under the weight of Apple’s new dominance. Perhaps the iPhone’s arrival will herald the next era of the smartphone wars, where the playing field is level, and the winners will be the customers that benefit from the competition. Time will tell.

Now that it is finally official, and the iPhone will escape the solitary confines of AT&T’s grasp to debut on America’s largest cell phone carrier on February 10, the impact will reverberate through the cell phone world in several ways, and the resulting shift will leave the landscape looking totally different. The question is, when the dust settles, who will be left in the best position?

Despite all the predictions of the analysts and experts, Android is not going anywhere.  The arrival of the iPhone to Verizon is sure to make Apple shareholders very happy over the next few months, but Android is not going to surrender nearly as much of its hard earned market share as some are saying.  But it will be interesting to see the results.

Apple’s competitors have managed to dig in well for the coming battle. Android has managed to gain a solid foothold, and thanks to its wide spread usage on multiple carriers, Google’s mobile OS is by far the most sold operating system at the moment– although it is still playing catch up to Apple and RIM in terms of total market share thanks to a late start. As recently as October, RIM was the market share leader with BlackBerry OS.  Although that changed in November, RIM still has a strong share, and with upcoming devices like the critically acclaimed PlayBook tablet on the way, don’t expect the Canadian company to go gentle into that good night just because Apple is being sold under Verizon’s banner. But that doesn’t mean that RIM and Google aren’t both nervous.

The iPhone 4 will sell phones. Lots and lots of phones. Betting against Apple over the last few years has generally been proven to be a bad idea. But there are a few things working against Apple.

First, the number of Android app developers continues to grow, and as AT&T, Sprint, T-Mobile, and even Verizon continue to introduce better and faster Android phones, Google’s mobile operating system should continue to attract more and more developers. Apple isn’t going to slack on its apps either, but the company’s much stricter development rules are more than likely to scare hordes of developers away from them and towards the waiting arms of Android.

Second, the immediate impact of the iPhone swap might be felt more by AT&T than Verizon. Some analysts suggest that Verizon may only sell 2.5 million iPhones, and many of those will be former AT&T customers. The iPhone 4 will no doubt win over converts on Verizon given time, but there are several very good phones out, and many people may wait for a contract renewal before even considering switching their current smartphones for what would essentially be a sideways change, even if it does have a shiny Apple logo on it. By then a new cell phone may have won the hearts and minds of the cool crowd, and the iPhone could be in the odd position trying to remain relevant–at least until the next generation of iPhone debuts. AT&T however, is currently listed as the worst U.S. carrier in terms of customer satisfaction, so expect to see subscribers flee AT&T for the potentially greener grass on Verizon’s side of the fence. That may be slightly unfair to AT&T, as the iPhone is a bandwidth hog that might soon have Verizon subscribers complaining about their network, but AT&T is likely to take a massive hit based on reputation alone. To help ease the blow, AT&T has recently announced a line of new Android smartphones, which could also help Android continue to eat up market share.

A third reason that the iPhone 4 might face some initial struggles is the emergence of 4G. When the iPhone 4 reaches Verizon, it will continue to operate at 3G speeds. Verizon is betting heavily on 4G, and recently announced a slew of new 4G devices, all coming very soon. The number one gripe against the iPhone has always been the congestion on AT&T’s network, and while Verizon’s larger network may help ease that a bit, there will still be 3G congestion on the iPhone regardless of which carrier it uses — the phone just devours bandwidth, especially with unlimited data plans Verizon plans to offer for the iPhone (although that is still unofficial).  The emergence of 4G should change that, and while no one doubts that an iPhone 4G phone is coming soon, but no one outside of Cupertino has any clue as to when it will debut. That might lead people towards phones like the upcoming 4G HTC Thunderbolt, or LG’s Revolution, among others.

Despite the negatives, some think the iPhone will debut big on Verizon. Very big. And as the iPhone muscles its way into the crowded smartphone market, Android is going to be the one pushed to the dirt.

In a recent report from JP Morgan, analyst Rod Hall foretold that RIM will take a minor hit of between 2 and 3 percent of the Verizon smartphone sales before plateauing at 37-percent, while Android could drop from 55-percent to a lowly 17-percent.

Hall’s arguments are that the people looking for a touch-oriented screen that owned a BlackBerry have either already switched to Android, or have already moved over to the iPhone on AT&T, which has caused RIM’s share to level out. The people who buy BlackBerry devices tend to do so for a reason, and that is not likely to change significantly. On the other hand, Hall seems to feel that Android is going to quickly receive a black eye.

“As the iPhone arrives we believe it will be seen as the superior ‘flatphone’ option at Verizon and that the majority of customers will prefer it,” Hall said.

Hall believes that within the next year, Apple’s smartphone sales will make up for well over 30-percent of all smartphones sold by Verizon, and could climb as high as 46 percent. His argument is essentially based on the idea that the iPhone is so vastly superior to all Android phones that the iOS will crush Google’s OS. Apple fans will likely concur, but Google (and several smartphone makers) might have something to say about that.

Why Android will survive

One of the problems with Hall’s argument is that many Apple fans have probably already joined AT&T. The cell phone market has grown so competitive that there are comparable top-line smartphones on all carriers, so there are options beyond the iPhone that people have been flocking to. There will doubtless be people who choose to switch to the iPhone — and why not, it’s a great phone — but to expect the same kind of reaction to the Verizon iPhone that Apple has seen while on AT&T is ridiculous. Fans of Apple care more about the phone than the carrier, and most already have iPhones if they intend to have one at all–regardless of the carrier. There will of course be exceptions, but to assume Apple will utterly dominate Verizon’s sales underestimates the level of competition, and overestimates the appeal of the iPhone.

Hall’s argument also underestimated the appeal of Android, which will continue to spread. This year’s CES was arguably the year of the tablet, with (literally) dozens of new tablets introduced. With only a few exceptions, every single one of them featured Android. Google’s OS continues to expand, and through that expansion comes interconnectivity between multiple devices. If this truly is the year of the tablet, expect iOS to do well. But expect the much more widespread Android OS to do better.

“We also see continued rapid growth of smartphones in general at Verizon taking some of the sting out of the debut of the iPhone,” Hall told clients via a recent analysis.

There will be more people who are likely to make the jump to smartphones this year, just as last year saw a 96-percent increase in global sales. That percentage of increase will drop substantially, but the number of sales should not. There will simply be more smartphones owned this year. Apple will make its push to take a significant portion of those sales, but it will face competition from some of the biggest companies in the world — not just Google, but Sony, LG, Samsung, and every other company that makes smartphones.

The new iPhone 4 is an amazing piece of hardware and one that deserves respect, but so are the HTC Thunderbolt, the Droid Bionic 4G, LG’s Revolution and Samsung’s upcoming and unnamed 4G LTE smartphone, as well as many more that are all going to be technologically superior to the iPhone 4 until Apple upgrades to 4G (which will happen sooner rather than later). Sony Ericsson is pushing its Experia brand with the Arc, and Microsoft is hoping to make moves with the Windows 7 phones. With each passing day, the cell phone market has more and more competitors to the iPhone, and Android is not going anywhere.

Although the iPhone is going to soon be on both Verizon and AT&T, Sprint and T-Mobile will also both continue to nurture their Android phones, ensuring that Google’s OS will continue to thrive even if Apple does insanely well at Verizon. Many are assuming that the iPhone’s arrival will slant the market in Apple’s favor, and it will certainly make an impact, but the arrival of the iPhone might signify the dilution of any single competitor rather than the superiority of one. Android was able to grow because iPhone was caged by AT&T, and because of that, the Google OS exploded and expanded. RIM managed to solidify its customer base, while Windows 7 has made small, but decent progress over the last few months.

2011 is going to be the year of the mobile device. Tablets and smartphones will be everywhere soon, and despite many analysts’ bold predictions, the smart money is in a competitive, three-way race that could expand over the year to include more dark horse candidates, and possibly the waiting behemoth of Microsoft, assuming the folks in Redmond can get it together quickly. When the dust settles, the real winners of the Verizon iPhone’s introduction will be the customer, who can sit back and watch the competition push our beloved gadgets into new directions.