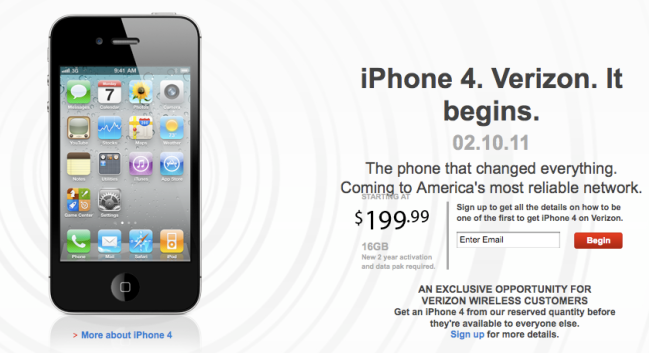 It has certainly been a long time coming. But if you’d be paying attention to the latest round of speculation, then it should come as no big surprise: Verizon today officially announced that it will be carrying Apple’s iPhone 4 starting early next month. The announcement was made by Lowell McAdam, Verizon’s President and Chief Operating Officer, at a press event in New York City.

“Today we’re partnering with a giant of the industry, and that’s Apple,”  McAdam said at the press conference.

McAdam raise some eyebrows when he announced that Verizon and Apple have been collaborating on the iPhone since 2008.

After the official announcement, McAdam passed the mic to Tim Cook, Apple’s Chief Operating Officer, who filled in some technical details. Verizon’s iPhone 4 will run on its CDMA network — not the 4G LTE network. Aside from the CDMA capability, it looks like it will be the tried and true iPhone 4. New customers can expect a 5-megapixel camera, FaceTime capability, and the Retina display — all featured on AT&T’s iPhone 4.

Dan Mead, Verizon’s CEO,  filled in some details about the launch. On February 3, existing Verizon customers will be able to place pre-orders. And on February 10, the iPhone will be available for order through Verizon and Apple stores and online. The 16GB iPhone will sell for $199 and the 32GB model for $299. Dee made it a point to emphasize that Verizon’s network is “robust” and will be able to handle an influx of new customers.

During a Q and A session, the Apple execs refused to comment on whether Verizon would get the iPhone 5, which presumably will launch for AT&T this summer.

Video-editing app LumaFusion to get a Galaxy Tab S8 launch
It’s 2022, and customizing my iPhone is still horrible
Google Pixel 7a: release date, price, specs, and all other rumors
Today’s best deals: TVs, laptops, iPads, robot vacuums and more
The Nothing Phone is finally coming to the U.S., and I can’t wait
Sunbird looks like the iMessage for Android app you’ve been waiting for
The most innovative smartphones of 2022
The most innovative smartwatches and wearables of 2022
These 6 things could make the Pixel 7a the perfect Google phone
Best Cyber Monday Tablet Deals: iPad, Amazon Fire, Samsung Galaxy Tab
Best Cyber Monday Smartwatch Deals: Apple Watch, Fitbit, Galaxy Watch
The best iPhone games to play in December 2022: Marvel Snap and more
I thought iOS 16 would ruin my iPhone 8, but it shocked me