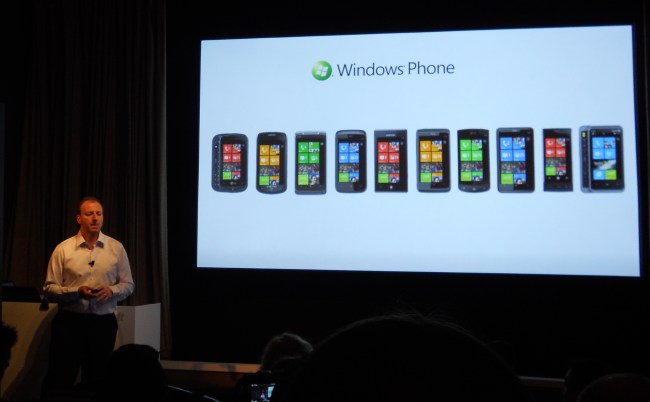 In downtown New York City today, Microsoft held a press conference to show off Windows Phone “Mango,” the much anticipated update to Windows Phone 7. We were on hand to check out the event, where a number of the “500 new features” were shown off. We already know about some of Mango’s new features from Mix 11 and some recent leaks, but Microsoft revealed quite a few new tidbits. The presentation was split into three separate sections, focusing on how Mango will improve communications, applications, and the Internet. The entire focus seems to be on finding new ways to integrate search, the Web, communication tools, and different apps into user friendly “hubs” that provide context and don’t force users to know the difference between the many programs they are using.

Mango is adding a number of enhancements to communications and the People Hub. Microsoft says BlackBerry, Android, and iOS force users to use a bunch of separate apps to communicate with their social circle. While Microsoft certainly doesn’t dislike apps (its Marketplace now has 18,000 of them), its focus seems to be on ways to integrate social services directly in with its native social apps.

People Hub & Messaging: Twitter and LinkedIn are now a part of contact profile pages, allowing you to see status updates and messages from those services, alongside Facebook Status updates. The People Hub also connects right up with the Messaging Hub, which now lets you intermix text messages, Facebook Chat, and Windows Live Messenger chats. Microsoft calls this “threading.” It’s fairly easy to switch between different chatting services and the Messaging Hub brings your conversation with you, showing people who enter and leave the conversation in real time. Facebook Check-ins and face detection software are also included so you can more easily tag photos and groups of photos. You can also add pictures across multiple social networks.

Groups: You can now group contacts together and message them in bulk. Unfortunately, Mango doesn’t currently import the people categories you may have already set up in messaging services or Facebook, but you can make groups with relative ease.

Linked Inboxes: In the current version of Windows Phone 7, you can have multiple Inboxes, but they are all separate. If you have Gmail and Yahoo Mail accounts, they can both be accessed, but they have separate homescreen live tiles and programs. Mango changes this, allowing you to integrate multiple email accounts into different hubs as you see fit. Enterprise features were also added. This flexibility seems nice, allowing you to group email as you see fit. The calendar has similar features.

Predictive text: The Windows Phone Mango keyboard tries to predict what you’re going to say before you type it. For example, if you type “Happy,” it may suggest “Birthday” as your next word.

Hands free responding: If you’re listening to music or have headphones on, Mango will allow you to hear and respond to text messages, etc without touching a button. It reads you the text and who it’s from, and then gives you the option to reply. While we don’t know how this feature will work outdoors or in a crowded area, it worked quite well in the controlled environment of this demonstration.

Microsoft is upgrading all of its applications to integrate all of the new features available on Mango. Aside from every app being a part of the multitasking and background apps processes in Mango, apps will now more easily integrate into every aspect of Windows Phone. Microsoft described its apps as “alive,” and showed off many of the new ways these programs can interact with users. Notifications have improved and users can pin individual features and app pages to their homescreen as a Live Tile. This sort of application deeplinking – called “App Shortcutting” – is one of the most promising aspects of WP7 Mango.

In addition, Microsoft has given its Xbox Live app and Office Hub a visual upgrade and a number of new features, including better Xbox Live friend integration. Your apps may start looking a bit more like games as well. A British Airways app was shown with integrated 3D graphics, allowing you to tour the plane and pick your seat in full polygonal 3D, as if playing a video game.

We’ll get into Bing in a bit, but Microsoft is adding App suggestions to many of its search results pages. A representative tried searching for the film “Water for Elephants,” which brought up a Bing movie page for the film, complete with things you’d expect, like a synopsis, genre, local showtimes, etc. However, there was also a tab for Apps, which had the IMDB app listed. When he selected to use IMDB, it not only opened the app, it automatically pulled up IMDB results for “Water for Elephants.” Bing Vision, Microsoft’s version of Google Goggles, also integrates apps in this way, allowing you to scan a book and instantly search the Amazon Kindle app or a number of other apps. If this were Android or iOS, you would have to open the app and then search for what you want manually.

We’re puzzled why Google hasn’t integrated Chrome into Android, but it may have to soon. Microsoft showed off a full version of Internet Explorer 9 running on Mango. To show how much better it was than the competition, a representative lined up the BlackBerry Torch, iPhone 4, Droid Charge, and a Mango phone. In an HTML5 speed test (which we believe is a Microsoft created test), IE9 handily defeated the competitors: The iPhone didn’t even load, the BB got four frames per second, the Droid Charge reached 10 fps, and Mango soared with 27 fps. What this proves, we’re not quite sure, but IE9 is fast and appears to load pages well.

Bing is also being integrated much more deeply into the phone. Microsoft’s goal is to avoid giving you pages of “blue links,” or standard search results, and instead provide you with direct answers, sometimes without you knowing you’re on the Web at all. This approach is what all search engines hope to do, but it’s good to see Bing heading in the right direction.

Local Scout: With Mango, Bing is now getting its own version of Google Places, albiet much better looking. If your phone knows your location, Bing will aggregate local venues, stores, etc and give a place page, called a “Quick Card,” for each of them. In addition, Bing maps now has indoor maps of many malls and large indoor areas. Though your GPS won’t work inside these locations (give it a few years), at least you’ll have a general idea of where to find Hot Topic in your local shopping center. We were also impressed with the Bing place pages for venues like Madison Square Gardens, which actually lists upcoming concerts and shows at the stadium.

Be sure to check out the handset-related announcements Microsoft made (new partners like Acer).  We also posted a quick picture gallery of the event, a video of Bing Vision, and a video of multitasking in action.

Overall, we were hoping for some handset announcements and the ability to touch and fool around with Mango ourselves, but we are, noentheless, impressed with many of the user-centric features Microsoft is adding to Windows Phone. Hopefully when it unveils its first set of Mango handsets, Microsoft will finally start to right the wobbly ship that is Windows Phone 7.