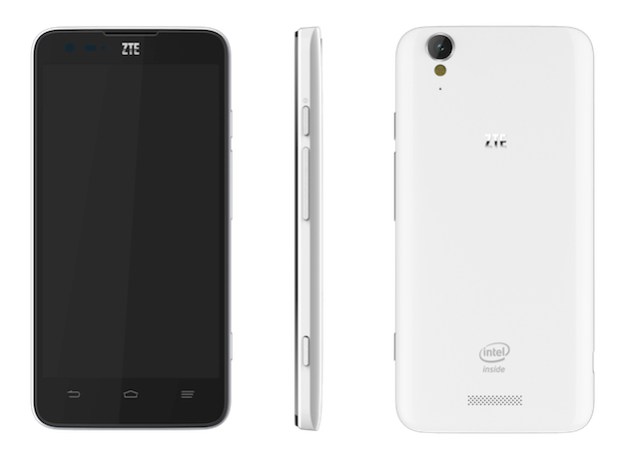 If you thought Samsung was having a creativity crisis when it comes to naming its smartphones recently – take a bow Galaxy Win – then ZTE has proved it has truly lost the plot with its latest addition, the ridiculously named ZTE Geek. Now, whether it means this in a playful way, a slightly hurtful way, or is bizarrely referencing the word’s circus side-show roots, we don’t know. But one thing’s for sure, it’s a really awful name for a phone.

Despite the stupid name, the phone is rather interesting, as it’s powered by the latest Z2580 dual-core Atom processor. That’s right, it’s Intel inside the Geek, and it’s the sparkly new Clover Trail+ platform introduced at Mobile World Congress 2013 and previously spotted in the Lenovo K900. ZTE sent out a press release at the beginning of March to tell the world it was developing a phone using the Clover Trail+ chip, so it’s a device we vaguely expected. The 2GHz processor is accompanied by 1GB of RAM and a measly 8GB of internal storage memory.

Moving on from the Geek’s guts, the device has a 5-inch display with a 720p resolution, an 8-megapixel camera on the rear, a 1-megapixel video call camera above the screen and a 2300mAh battery providing the energy to keep everything going. Android 4.2.2 is onboard, and we’d expect the Mifavor user interface to be installed over the top. The spec list is finished off with 3G connectivity, Bluetooth 4.0, GPS and wireless charging.

ZTE announced the Geek during the Intel Developer Forum currently underway in Beijing, China, but hasn’t provided any information on when the phone will go on sale, or where. Given ZTE’s reluctance to release much hardware outside of China these past months, it wouldn’t come as much of a surprise to learn the Geek is again destined only for ZTE’s home turf. But then, could you bring yourself to buy a phone named the Geek, no matter how interesting the processor inside?