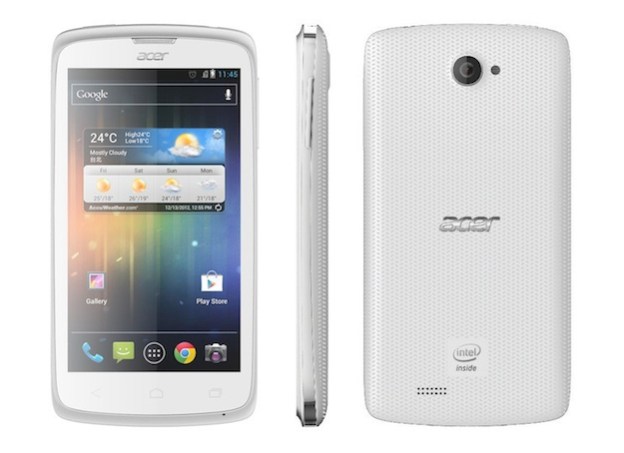 Intel has announced it will show a new dual-core, dual graphics smartphone platform at Mobile World Congress at the end of this month. While it’s not certain, this will probably be the Z2580 dual-core Atom processor announced during CES 2013, where Lenovo also demonstrated the first phone to use the chip – the Lenovo K900.

If you’re into Intel’s codenames, then the Z2580 is also known as the Clover Trail+, and it first showed up on a roadmap at last year’s Mobile World Congress show. It’s destined for range-topping devices like the K900, and provides 4G LTE connectivity, a necessity if Intel wants to eventually break into all markets.

For now though, Intel continues to push its devices in Asia, where more cost-effective phones are popular. Today we have the announcement of the Acer Liquid C1, a low-to-mid range Android smartphone which will launch in Thailand very soon. Believe it or not, the C1 is the ninth Intel phone to be released in as many months, but it’s one of the first to feature Intel’s new Lexington chip.

Intel’s Z2420 Lexington platform is designed to power more basic devices than the Medfield chip, and is especially suited to hardware with dual-SIM capabilities which are particularly popular in emerging markets. The chip made its debut in the Xolo X500 earlier this month, a basic phone headed for India. Xolo was responsible for releasing the first Intel-powered smartphone, the Xolo X900, back in 2011.

The Acer Liquid C1 has a 4.3-inch touchscreen with a 960 x 540 pixel resolution, while the single-core Lexington processor has been clocked at 1.2GHz. It also has an 8-megapixel camera (which is certainly higher than we’re used to seeing on a basic device), 4GB of storage space, a microSD card slot, GPS and Android 4.0 Ice Cream Sandwich is its operating system. As for the cost, the Liquid C1 will wear a converted price tag of around $330.

So why has Intel chosen Thailand as it’s first port of call in Asia? According to ZDNet, Intel wants to capture the attention of the 67 million people living in the country, where six million smartphones were sold last year and 3G connectivity is about to take off.

Intel has a long standing relationship with Acer through its PC chip business, and both share a common goal of breaking into the smartphone market. Acer aims to triple its 2012 smartphone sales to 1.5 million this year, with a target of 5 million provisionally set for 2014.

While the Liquid C1 probably won’t make it to the U.S. or Europe, we’ve got high hopes for hardware like the Lenovo K900 and the Z2580 Clover Trail+. We’ll find out more about both at MWC.

Video-editing app LumaFusion to get a Galaxy Tab S8 launch
Does the Google Pixel Watch have fall detection? Not yet, but it’s coming soon
Relax, the EU’s scary USB-C rule won’t rob you of fast-charging benefits
It’s official: Apple is required to make a USB-C iPhone by 2024
Qualcomm’s Snapdragon 6 and 4 Gen 1 chips are big deals for cheap phones
Even the Apple AirTag is discounted for Cyber Monday 2022
Time is running out to save $100 on the Pixel 7 for Cyber Monday
Samsung Galaxy Z Fold 4, Z Flip 4 get big Cyber Monday discounts
Why a Kindle Paperwhite is the best $100 you can spend on Cyber Monday
When is my phone getting Android 13? Google, Samsung, OnePlus, and more
This Amazfit fitness tracker is $35 for Cyber Monday, and it’s selling fast
This 10-inch Lenovo tablet is $129 for Cyber Monday (selling fast)
Save $200 on the Samsung Galaxy Tab S7+ with S Pen for Cyber Monday