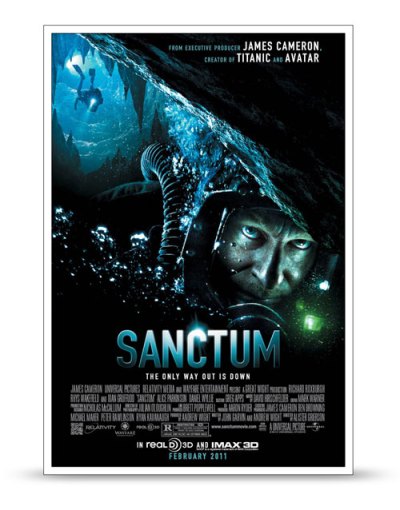 When the number one thing that a movie has going for it is that one of its producers is well known — not an actor, director or even writer — then you should be wary, and rightly so. When you look at the trailers and posters for the film Sanctum, the one thing you will notice highlighted is that the film is “From Executive Producer James Cameron, Creator of Titanic and Avatar.” Even in the credits on the poster, Cameron’s name is listed even before the actors or the title.

Sure, the guy is somewhat well known, what with directing and writing two of the top… well, the two top-grossing movies of all time. But it does seem like the studio behind Sanctum is banking more on the reputation of a guy who — realistically — is only loosely connected to the actual making of the movie. After seeing Sanctum, that decision makes sense.

Sanctum is a movie built entirely around the use of 3D combined with the specific cinematography used to show off the cave diving that takes center stage in the film. As a result, the film is beautiful at times, bordering on stunning, and the 3D really does make it worth the price of admission. The weak plot, mediocre acting and paper-thin characterizations will likely make it a quickly forgotten movie, but the visuals almost make it worth seeing in the theaters.

Inspired by a true story. Sorta.

Deep within the strangling vegetation of a South Pacific island, a massive hole stands out like a missing section of the world. At the bottom of the hole, the mostly underwater Esa-ala cave system begins, and a group of explorers is determined to lay their eyes on sights that no human being has ever seen before. After months of exploration, the caves remain a labyrinthine mystery and the elusive outlet to the ocean remains hidden, suggesting that the caves are far more massive than anyone originally suspected.

At the heart of the exploration team is master diver Frank McGuire, one of the world’s best cave divers. He and his crew continue to push into the cave system even as their American financier, Carl Huxley, a part-time adventurer in his own right, warns that funding is nearing an end, so if they are going to find the way through to the ocean, they must do so soon.

Just as Carl, his girlfriend, and Frank’s 17-year old estranged son arrive, a storm hits the island and a flash flood cuts the group off from the surface. With dwindling supplies and no chance of escaping the way they entered, the only hope of survival lies in finding an exit deep within a cave system that exists both above and below water, where no human being has ever been before.

While the premise is enticing and thrilling, if you have watched enough movies of any genre, you can almost piece together exactly what will happen from the start, and who will live and die. You have the gruff father who is one of the best in the world at something, and his estranged son. Hopefully it isn’t too much of a spoiler to say that they reconcile, and it turns out the son has learned some invaluable skills along the way from dad.

The story for Sanctum comes from Andrew Wright, a real-life cave diver who had his own near-death experience while leading an expedition through a series of underwater caves in Australia. Wright and the 14 others with him managed to find a way out after being trapped, and all survived. It is from this event that the “inspired by a true story”  tag adorns the front of the movie.  In both the real event and the movie, people are trapped in a series of underwater caves and need to find a way out, but the similarities end there.

In the real-life event, Wright and his group managed to work together, all hyper aware of the dangers they faced. In Sanctum, people do things that are at best stupid, and at worst, insane. Characters choose to leave life-saving equipment because it is “icky.” Some are bizarrely unperturbed by the ordeal, while others still seem to blame those with them for everything, like rain being cold. Here is a little tip for all potential screenwriters out there: making a character annoying is not a good thing. Not ever. Even if you want to use that character’s annoying tendencies to build future dramatic plot points, just don’t do it. Please?

As the cave becomes more deadly, the clichés become more palpable — the story is not exactly a Shakespearean work. To summarize the plot, people in a cave get trapped, they try to find their way out, a bunch of them die. Sorry for the spoilers.

While Sanctum‘s story is based on an amazing real event, the movie takes that nugget of an idea, and wraps it in character development 101. Every character you see is an archetype that you have seen before in dozens of circumstances. To call them unoriginal is an understatement.

The characters all quickly become one-dimensional stereotypes. The beautiful and adventurous Victoria (Where the Wild Things Are and X-Men Origins: Wolverine’s Alice Parkinson) quickly turns into a “damsel in distress,” and despite the fact that it is mentioned that she climbed Mt. Everest, she is continually a liability. The rich adventurer Carl (the Fantastic Four films and W’s Ioan Gruffudd), must have drank a handful of “crazy water” about halfway through the film, as he begins to do things that are utterly ridiculous in the situation. It is a badly drawn character, and Gruffudd does not help matters any.  But more on that in a bit.  At the heart of the adventure are the father and son, and that is where Sanctum fails the most.

Richard Roxburgh (Moulin Rouge!, Rake) takes the bulk of the screen time as Frank McGuire, a gruff cave diver who has nearly preternatural instincts when it comes to exploring underwater caves. It is his passion in life, and as a result, his son Josh, played by Rhys Wakefield (Broken Hill, The Black Balloon) is estranged from the old man.

From the first moment when you understand the dynamic, you know where the story is going to go. Take a tough-as-nails dad who has trouble expressing his love for his son, and throw him in a tense situation with the likable (likable in the sense that the characters all like him, not necessarily that the audience likes him) and surprisingly accomplished kid, then watch as the two bond. Despite the cliche, it wouldn’t be that bad, but neither character is particularly interesting. The two actors do a decent enough job with the dialogue they are given, but neither role is ever really fleshed out, and both are so generic that it is hard to feel much of a connection to them. Of the two, Frank is the far more interesting character — which isn’t saying much — thanks mainly to his cold-blooded and logical estimations of the dangers they are in. Josh is forgettable — so much so that he seems to disappear for large chunks at a time, even when he is on screen. His character is predictable and never really does anything endearing enough to merit the amount of emphasis he is given.

In fact, that is a problem with the majority of the characters. For the most part, the cast is decent, but all the characters are thin, and if it weren’t for the deliberate repetition, odds are you wouldn’t know a single character’s name until late in the movie at best. One exception is Ioan Gruffudd, who is truly awful.

I have always liked Gruffudd, ever since his turn in AE’s Hornblower series, which introduced him as a leading actor to millions of Americans. Gruffudd either chooses, or was told to use a grating American accent, and every line he has feels forced and trite, like he forgot to study his lines and is suddenly put in front of a camera with no idea what he is doing. It is jarring how bad he is, and it doesn’t help that his character is by far the most unbelievable to begin with. The character of Carl is ridiculous, and continually does contradictory things that are not just out of place, but downright stupid in the situation. It is harsh to say, but without Gruffudd and the character he plays in the film, Sanctum would have been a marginally better movie. So far this year, he is the frontrunner to receive a Razzie.

The star of the film: the cave system

While the acting is mediocre across the board, and the characters are forgettable even as they are speaking, the real star of the film is the cave, which is brought to life by the 3D technology that Cameron loaned to the filmmakers. While most films use 3D as a gimmick to sell tickets, a handful of visually oriented filmmakers “get it,” and they use the technology to convey a sense of depth. Director Alister Grierson and cinematographer Jules O’Laughlin are keenly aware of the technical abilities of the 3D medium, and they use it to full advantage.

The cave system is a claustrophobic place, but it is also a fairly amazing one. Filmed on location at the Gold Coast in Queensland, Australia, the visuals of the movie are enough to help you overlook the dialogue, acting and characterizations. At times, it looks simply amazing, as if you have entered another world where there is just enough to make it familiar, but it still feels alien. This is not a place for humans, and you can feel that.

Sanctum manages to take what could be a series of dull and similar looking caves and makes them all feel unique and extraordinary. The film feels like it began  life as a documentary, with an emphasis on telling the story of an isolated cave system where humans have never been, then someone had the idea to throw a plot into it at the last minute. If you could watch the film without the sound on, it might actually be a better movie.

Watch this film in the theaters on a big screen with 3D, or don’t bother watching it at all. It would probably look fine on a 3D TV at home as well, but the visuals benefit from the larger screen. The story and characters are bad, but the visuals balance it out.

Sanctum is at best an average film, but if you are a fan of the style of 3D that Cameron used in Avatar, where an incredible and alien-looking world has a real sense of depth and life, then the film is worth a look. You probably won’t regret seeing it despite the plot, mainly because you will have forgotten it by the time the credits roll.

Stunning visuals. Amazing use of 3D. The underwater cave system feels like an alien world.

Ioan Gruffudd. Cliches galore. One-dimensional characters that you won’t form an attachment to.