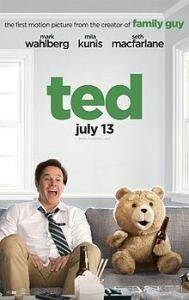 Whether or not you are a fan of Seth MacFarlane, it is hard to escape his shadow these days. Family Guy continues to grow, American Dad is a success, and with several other shows on air and in the development stages MacFarlane is one of the busiest men in Hollywood. His schedule has become so crazed of late that Fox agreed to postpone the high profile reboot of The Flintstones until MacFarlane’s schedule clears up a bit. So like him or not, you probably know who he is.

I would consider myself a fan of MacFarlane, but not a passionate one. I enjoy his projects, but I also understand the criticism many throw at him, that his humor is repetitive and lacks any real risks—despite the cavalcade of absurd and sometimes even disturbingly gross humor. MacFarlane’s shows all have a formula, and it is one that some find wearisome.

Ted is an answer to that criticism. It is MacFarlane operating in his element, with no restrictions, no censors, and a quality cast that is more than willing to trust him. Instead of just regurgitating the Family Guy humor, Ted is the evolution of it.

MacFarlane’s humor constantly pushes the boundary of good taste, and more than a few people are likely to be offended—some very much so—but that won’t take away from the fact that Ted is the funniest film of the year so far, and shows that MacFarlane hasn’t even begun to hit his stride.

A boy and his bear

John Bennett is a lonely and unpopular eight-year old boy growing up in Boston, desperately looking for a friend. When a Christmas wish brings his teddy bear, Ted, to life, everything changes.

Thankfully, MacFarlane and screenplay co-writers Alec Sulkin and Wellesley Wild (both writers for Family Guy) decided to deal with this quickly and easily. Ted’s “birth” is seen as a miracle, and he gains a bit of fame as a child star. That fame quickly fades though, and by the time John is grown up (and played by Mark Wahlberg), the issue of a teddy bear coming to life is forgotten and taken for granted. Doing away with this logical constraint frees the story up to go on without dealing with any heavy themes, like, say, John potentially being insane. It is a guy and his friend, who just happens to be a foul-mouthed, irresponsible bear.

Now in his mid-30s and living with both Ted and his girlfriend Lori (Mila Kunis), John is fluttering through life with no real sense of responsibility or ambition. When their fourth anniversary ends up as a debacle, Lori begins to see Ted as more of a hindrance than a best friend, and insists he move out. You can pretty much guess where the story goes from there. Ted agrees to move, but that doesn’t solve the problem of John’s adolescent nature.

The story is textbook. You have a man-boy dating a mature woman, and naturally the two begin to have issues spurred on by the wild friend. The character of Ted is simply the catalyst, and while the bear is the comedic focus (75-percent of all the best lines come from him), the story revolves around John.

Not surprisingly, the third act is therefore light on the humor and changes tracks to deal with the dramatic issues. As you might expect, this is where the film seriously begins to lag. The characters do enough to earn your attachment—or at least your curiosity to see how it all plays out—so the final section isn’t bad by any means, but calling it predictable is an understatement. It all ends with a few of the funniest moments of the film though, which ties everything up nicely.

The cast will be familiar to Family Guy and American Dad fans, as many of them have some connection to the show. Mila Kunis is a series regular; cast member Patrick Warburton has a small, but highly memorable role; Patrick Stewart, who frequents American Dad, even has a small role as the narrator. But the film really comes down to Wahlberg, Kunis, MacFarlane, and some exceptional CGI.

Throughout his career, Wahlberg has focused on two distinct characters: the likeable everguy, and the action hero. His action hero role has always been very hit or miss for me, but his likable guy is usually spot on–as it is here. He kills it in this film, and coming off the action packed Contraband, the contrast is exceptional. While Ted has the majority of the funniest lines, Wahlberg’s John is right right there with him. His delivery is spot on, and you want to root for him.

Kunis is a rising star with good reason. She turns in another solid performance, but she is somewhat pigeon-holed by the role as the “mature” girlfriend. It is a role you have seen dozens of times before, and it always puts her somewhat at odds with the audience. You need this character to highlight the imperfections in a character like John, but it means she puts herself in a somewhat antagonistic role. Even if her position is entirely understandable, unless John (and John like characters everywhere) turns out to be a total monster, you can’t help but root for him. The narrative is designed that way. It inevitability limits her appeal, but Kunis does well with what she is given.

The real star of the show is the CGI-created Ted, voiced by MacFarlane. The facial animations are funny in their own right, and when he switches to a deadpan stare it is laugh out loud funny just by the design. MacFarlane’s voice work is somewhere in the neighborhood of Peter Griffin and Brian from Family Guy, but with a bit of originality. Every time Ted is on screen is a good use of time. Seeing a teddy bear get drunk, talk smack to people, and take up with hookers never gets old. Never. I can’t stress that enough.

Ted is a triumph for Seth MacFarlane, and it is a film that should silence his critics. There are some serious pacing problems with the final act, but they are minor complaints compared to the film as a whole. The overall plot is very generic and more than a little cliché, but the screenplay is filled with fresh and original moments that will have people howling.

There will unavoidably be comparisons between Ted and The Hangover, but only so far as that they are both surprisingly good summer comedies that will strike a chord in audiences and have a decent shelf life. The real question is where does MacFarlane go from here? This was just his first feature film, and I for one can’t wait to see what he comes up with next.