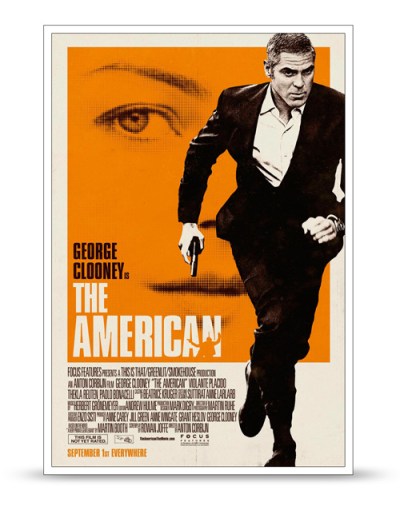 Hitting theaters today is George Clooney’s newest indie-flick, The American. Directed by Anton Corbijn (Control), The American is an experiment in suspense and character development that flashes with moments of beauty, but will ultimately split audiences.

The first thing you need to know about The American is that the trailers and ads are wildly misleading.  In fact, rarely has there been a movie where the promotion has been so different than the actual product. It would be like if you had seen a trailer for James Cameron’s Titanic, and the ads made it seem like it was a movie about Kathy Bates’ character of Molly Brown. Imagine your surprise. If Stallone’s The Expendables is on one end of the action movie spectrum, then The American is its polar opposite.

Despite its promotion, The American is not exactly what you would call an action movie.  That doesn’t make it a bad movie by any means, nor is it the fault of the movie or the filmmakers, but there are going to be some severely disappointed audience members who are expecting an action movie with several car chases, gun fights, and brutal fights. Those all happen, but they make up roughly one-tenth of the movie, and are secondary to what the film is about. Even the poster above is designed to conjure images of action.

The American is an art house movie that just happens to feature one of the world’s biggest stars. The rest of the cast is made up of actors from around the world, but most will go unrecognized to all but the most devote  cinema fans. Odds are you won’t recognize the actors, which works towards what Clooney and Corbjn were looking to accomplish. This is not a typical Hollywood movie, and Clooney again proves that with his popularity comes the freedom to take risks when you aren’t forced to take roles to further your career. There is a dark and morose tone throughout the film that dares you to like it. Sometimes those risks work, sometimes they don’t.  Some will see it as arrogant, others will see it as avant garde. It really will just depend on your point of view.

The Plot is Secondary to the Suspense

If you believe the press release for The American, the movie is about an assassin that heads to the Italian countryside following a mission in Sweden that ends badly. The assassin agrees to take one final job that does not involve killing anyone, and while completing his mission is surprised to find himself involved with a local woman. But after so long living in the shadows, stepping into the light proves harder than expected.

Sounds fairly awesome right?  Maybe even familiar, with a story of a hired killer who tries to leave the profession, but has one final job. It is also a very, very slanted version of the events of this movie. Clooney plays Jack aka Edward aka Mr. Butterfly. Jack is forced to seek asylum in Italy following events in Sweden, which leads him to the remote village of Castel del Monte. While trying to lay low, Jack’s employer, Pavel (Johan Leysen), gives him a mission that does not require him pulling the trigger. Instead, he is hired to construct a gun for a woman known as Mathilde (Thekla Reuten). While completing his assignment, Jack begins an odd friendship with a local priest (Paolo Bonacelli), and a romance with a prostitute named Clara (Violante Placido).

If you are the type of moviegoer that thrives on the intricacies of plot, and lives for the twists and turns of a well told story, The American is not for you. The plot really isn’t a major point of the movie. Everything is told through glimpses and innuendo, and you never really know the whole story, nor do you ever get a true glimpse at the machinations that forced Jack to the Italian countryside. It is also never really clear if Jack is an assassin, a craftsman, or a something else, but that isn’t really the point. The movie is about the tension and suspense that a life of violence can create. And that is where the movie shines for some, but will ultimately alienate others.

The Camera Replaces Music and Dialog

If you are expecting an action movie (which is a fair assumption since the studio is promoting it as an action movie) then you are going to be disappointed. Or at the very least surprised. The American is defined by what is not there more than what is. Corbjin uses the voids to speak volumes, and the first half of the movie is dominated by silence. At times it is almost overwhelming, and it quickly reminds you that this is not a typical Hollywood movie. At about the 30 minute mark, the slow pace and quiet tones will lose a good portion of the audience. By the hour mark many people will be looking at their watches and wondering how much more they have to endure. The movie does pick up, but if you don’t enjoy the slow build up, then the movie will not win you over. Some will like it, some will not, and there won’t be many in between.

There is also a heavy subtext at work that is somewhat obvious and underdeveloped, but it is an interesting layer. The character of Jack is an American- the only American in the movie. As such, he becomes somewhat representative of America, and this is played out in several ways, most obviously in his discussions with Father Benedetto. It is a fairly obvious metaphor, yet an interesting one.

Corbjin comes from a music video background, and that becomes apparent quickly. He uses quick cuts and visual imagery to tell part of the story, and he conveys emotion without dialog. It adds to the sense of silence and lets the audience fill in the gaps to make the setting more suspenseful. It doesn’t always work, and sometimes you will simply want a bit of exposition- not a lot, but just enough to invest emotionally- but when it does work it is masterfully done. There are a few scenes where Clooney is in a dangerous situation, and without saying a word, and without heavy handed music to guide you through the scene, you feel the tension and suspense without having to be told. Again, it doesn’t always work, but when it does, it is an impressive piece of filmmaking.

Clooney is a Star, and Can Get Away With Things Others Can’t

Clooney is one of the few actors that can get away with taking on risky roles like this. He and his producing partner Grant Heslov choose projects like The American, and like Good Night, and Good Luck that are subtle and nuanced. It might win them awards, but it also risks alienating the mainstream audience. Another actor with less charisma might not fare as well in the public after doing roles against character as Clooney does, but it is hard to deny Clooney’s acting ability. He may not have the range that some actors do- the Daniel Day Lewises and the Sean Pennes of the world who can totally disappear into their roles- but Clooney is among the best in his trade, and he is able to convey the character of Jack’s deep paranoia and isolation without much dialog. Jack might be a bit shallow and contradictory at times, but Clooney portrays him impressively.

The rest of the cast also does well, but this is Jack’s story, and even Jack is almost secondary to the tone and setting of the movie. The cast plays their parts well, and while many might find this movie slow and possibly even boring, you can’t fault anyone in the film in terms of ability. This movie is for the art house crowd, and it will attract only a small niche of viewers once the word of mouth over shadows the studio promotion of the film. If you are looking for action movie, you will be sorely disappointed. If you are looking for an experimental movie that pushes cinema, you will at least appreciate what The American is.

Despite its attempts to try to elevate the subject from a typical story of an assassin on his last mission to something more, The American is hit or miss. If you watch the trailer, besides the misleading slant, you will also see glimpses of a few scenes that are missing from the actual movie, plus at least one scene that was reshot. Whether this was a studio decision to make changes in order to try to make the story more “sexy”, or whether it was a decision to try to fix things that did not work, it does feel like there is something missing from The American.

There is a lot to appreciate about The American. It has some beautiful imagery, it does things with a camera that are rarely seen these days, and the cast and crew all do a great job. Some will love this movie, while others will look at them and wonder if they saw the same movie. The American is an interesting look at the medium of cinema that may win a few awards, but will ultimately be unsatisfying to most.  Only the most hardened fans of cinema that appreciate a touch of nihilism will truly embrace Clooney and Corbjin’s film.  While there are some flashes of true brilliance in The American, the movie will demand patience.  The American is an interesting experiment in film making that has a few flaws that contrast occasional flashes of brilliance.  All in all most will not find it worth the effort, but a few that are looking for something fresh and unique might enjoy the art house flick.

Interesting use of settings and camera work to convey the emotion of the scenes.  Beautiful settings, great acting.

Little to no character development.  The movie is billed as an action movie, but it is not.  The movie will only appeal to the most dedicated of art house cinema fans.

Lightyear review: Taking fun to infinity and beyond