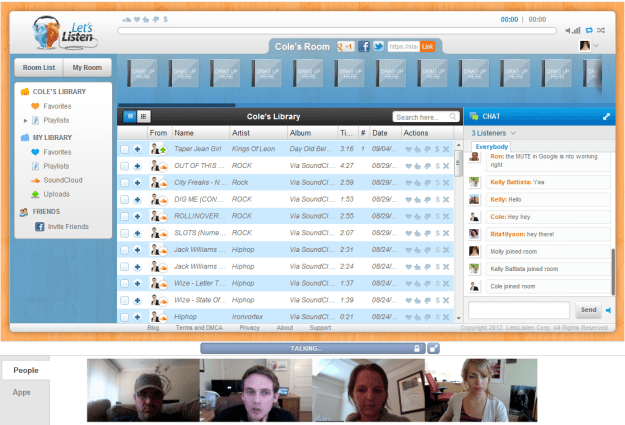 When Turntable.fm launched last year, the reaction was swift and palpable: People logged on, checked in, and quickly became obsessed with the music, DJ-based application. It was arguably the first service that introduced game mechanics to music listening, and one of the most successful efforts to get make it a group function.

But then, it crashed. Epically. User interest fell off a cliff, and much ado has been made about its purported climb back. And this has left a space for group listening and incentivized listening, one that the likes of Facebook, Spotify, and even Google Music are trying to experiment with.

You can now add LetsListen to that list. Today, the app unveils group listening with Google Hangouts as well as SoundCloud integration. The app also allows you to connect via Twitter or Facebook and load your own music files.

The app is easy enough to set up and use: In a hands-on demo with founders Cole Flournoy and Kelly Battista, I simply had to join a Hangout and authenticate the LetsListen app, and then we jumped into the service’s platform. Our personal videos displayed below the player – for the record, you can mute or cut these feeds entirely. Each user has their own room, full of their music, either found via SoundCloud or your personal collection that you upload to LetsListen’s locker service. Then you jump into rooms, where you search through others libraries and suggest tracks to be played. You can also suggest your own content or find something from SoundCloud. Of course, there’s also a private listening mode if you just want to use LetsListen on your own.

The idea is to marry the group-think and interactivity of Turntable while also giving users the ability to enjoy the app passively. “We started on this six months or so before Turntable came out,” Flournoy tells me. “It’s similar because of the group listening piece, but this is also a full-fledged music locker. You can allow your friends to join or you can switch it to private.”

Giving it to its social side, LetsListen will integrate with the Facebook Ticker, meaning that when you have it switched to public, that listening activity will show up over on Facebook (it’s worth mentioning LetsListen is automatically set to public – no surprise there).

Music related startups are in a bit of a precarious position given the state of digital content and the unending argument between users consumption habits and rights holders death grip on traditional means of distribution. I ask Flournoy if there have been any obstacles for LetsListen in this regard, but luckily the way this application functions means it doesn’t have to deal with that headache. “We pay an Internet streaming fee similar to what Pandora does for the songs you listen to that you don’t own,” he says.

Flournoy says the basic LetsListen service that you can access today will be free forever. Users do have the option to upgrade their storage space, and in the future will have the ability to block ads with a premium account. And what about integrating other services? While he couldn’t name names, new outlets are on the horizon.

Signing those new partnerships will be important: There’s a risk in relying on users to supply their own content, and while SoundCloud is a huge coup for LetsListen, and getting some other names attached to music integration will lure some more users its way. That said, there’s definitely still a market to be exploited here, and regardless of the veteran statuses services like Pandora and iTunes have, no one has quite capitalized on making music truly social yet.

Topics
How to play Apple Music on an Alexa device
Spotify adds a Netflix hub so you can listen to the chilling sounds of Squid Game
LG’s WebOS TVs get a native Apple Music app
Hands-on review: Apple’s head-tracking for music is one weird trip
Spotify is finally making it easier to block unwanted followers
What is hi-res audio, and how can you experience it right now?
How to add family members to your Apple Music subscription
How to stream music to a HomePod with an Android phone
Watch Spotify’s tour of its plush U.S. headquarters
Chill with Spotify for free on Delta Airlines this holiday season
From movies to music, 2021 was the year of Dolby Atmos
AirPods Pro and AirPods 3 are both discounted today at Amazon
Forget AirPods Pro: Beats Studio Buds are ONLY $120 at Amazon today