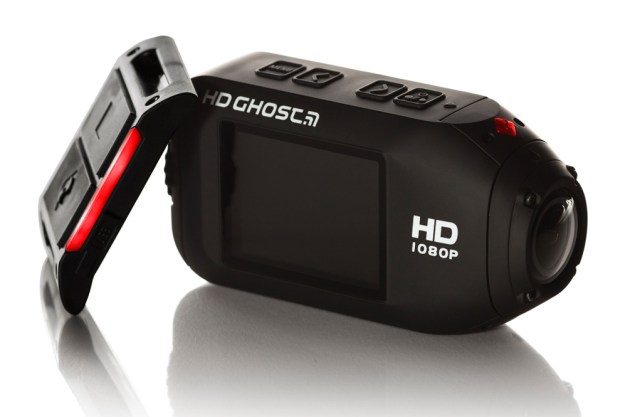 “The Drift HD Ghost is an excellent quality, very complete POV camcorder – with a handy remote control to boot.”

Older generation point-of-view, or POV, camcorders were clunky, low resolution, and expensive. But, now with flash memory recording and higher-resolution sensors, the newest POV camcorders have become tiny, easy-to-use, affordable. No company has made as big of an impact in this sector as GoPro, and now there are POV camcorders available from a variety of manufacturers, big and small.

One such new entry is the HD Ghost ($399), from newcomer Drift Innovation. The HD Ghost has features that will appeal to a wide variety of videographers – whether you like extreme sports videography or not. Don’t let its size fool you: It does.

The HD Ghost records both high-definition video and high-resolution JPEG images. For video, three Hi-Def settings are available: 1080p, 960p, and 720p. At the highest 1080p, you can shoot at 30 frames per second. At 720p, 25, 30, 50, or 60 fps are your options. Video is recorded in either popular MP4 (a heavily compressed format that allows for easy sharing) or QuickTime MOV formats. For stills, JPEG images can be recorded at 11-, 8-, and 5-megapixel resolutions. Video or stills are displayed on the built-in 2-inch LCD monitor. All images are recorded on an optional microSDHC card, with support up to 32GB.

The HD Ghost has a seven-element, three-way field of view (FOV) lens, which focuses from 0.5 meters to infinity. The FOV is menu-selectable at three settings: a super-wide 170, a standard wide 127, or a normal 90 degrees. The lens manually rotates 300 degrees to achieve any orientation you might desire.

The camcorder is also waterproof down to 10 feet, so it can easily be used in a variety of wet scenarios. Just make sure that the back cover, which opens for access to the removable battery, ports, and card slot, is tightly sealed. Built-in Wi-Fi allows the HD Ghost to communicate and display video with iOS devices through the free Drift Mobile App (as of this writing, it’s coming soon for Android). A built-in microphone captures high quality but mono audio; an external input jack is available for higher-quality external microphones.

As for ergonomics, the HD Ghost is compact, measuring only 4.1 x 2 x 1.3 inches and weighing 5.9 ounces. It won’t get in the way when it’s attached to your body, helmet, or goggles, with the included mounting fixtures.

All features and controls are accessed through a series of four imbedded push buttons at the top of the camcorder. Pushing the Menu button brings up the operational menu, and from there one selects the four operational modes. Up/Down/Select buttons take you through additional menu settings.

Unlike some other POV cams, the HD Ghost comes equipped with an industry first, two-way LED remote control. It can be worn like a wristwatch with the provided wrist strap, and it’s rechargeable through a provided USB cable. Two large buttons are used to either start or stop recording. Green LED lights show the camcorder is ready to record, and Red LED lights confirm recording is in progress.

The LCD screen is tiny and your eyes might have a problem seeing the menu settings. If you own an iPhone or iPad, you can use the aforementioned free Drift Mobile App as a secondary viewing source. With the HD Ghost set in an ad-hoc (device to device) Wi-Fi mode, you see the camera’s video and menu options on your iOS device. This is so cool, because it helps you see the menus better and aids in framing up a shot properly. You can also trigger the HD Ghost to start or stop recording from the iPhone, great for using the camcorder for remote shots. Unfortunately, you can’t use the Wi-Fi setting to connect to a computer or wireless network for transferring purposes.

A series of included accessories make the package ergonomically complete: two adhesive plates for firmly mounting the camera to a helmet; a goggle mount to attach the HD Ghost to your ski goggles; remote control; and a wrist strap for the remote control.

The black HD Ghost camera and all of its included accessories are securely housed in a sturdy, well-designed white plastic box. We don’t normally get excited about packaging, but Drift Innovation spent some time thinking about this (putting things back in it, however, might be a challenge). Also included are a high-capacity rechargeable battery, rechargeable remote control with wrist strap, universal clip, mounting fixtures, goggle mount, USB cable, microphone extension cord, sealable connector hat, and a quick guide. The battery is recharged in-camera.

We used the HD Ghost in a variety of scenarios to test out its versatility and ease of use. In one scenario, the HD Ghost was attached to a hybrid street/mountain bike, and in the other we shot an up-close and personal performance by a pianist.

Normally one would attach the HD Ghost to a helmet using the provided fixtures, but since no helmet was available, we needed a different method of mounting. We improvised with a bike reflector mount on the front handlebar. Removing the reflector, we adapted it with a 0.25-inch bolt to hold the HD Ghost camera firmly in place.

We selected 170-degree FOV and 1080p recording mode for the highest quality, and pointed the camera straight ahead. The iPhone Ghost app gave us a great way to check the framing off-camera. Off we went, starting and stopping the Ghost with the remote control attached to our wrist. Red LEDs on the remote confirmed when recordings were taking place. Later, back home we attached the HD Ghost to a computer via a USB cable and transferred the video files.

We also connected the HD Ghost to a Sony 52-inch HDTV using an optional miniHDMI-to-HDMI cable, and played back video clips directly from the HD Ghost Play menu. On the TV, watching the POV playback was like reliving the bike-ride experience all over again. The 170 FOV captured even more than what our eyes could normally see. The 1080p resolution was sharp and the colors were excellent, remarkable for a camera of this small size. Surprisingly, even the audio captured from the internal microphone was very good.

In the second scenario, we recorded a pianist, Gary Poirot, at the piano keyboard during his performance. Since the complete show ran for more than two hours, we wanted to confirm if a 32GB memory card and a fully charged battery would capture it all. We set up the HD Ghost at the edge of the piano, using a mini Gorillapod tripod, and taped it down with gaffers tape. The lens was rotated 90 degrees to orient the image properly on the tripod. The widest 170-degree FOV showed not only a unique view of the piano performing at the keyboards, but also covered him when he turned away to speak to the audience. And hardly anyone noticed the camera!

Later, in the playback on our TV, the 1080p resolution showed excellent detail, almost as good as more expensive camcorders. Unfortunately, the audio was distorted because we failed to set a midrange level for the internal microphone sensitivity (one of three is possible). And yes, the battery and memory card lasted the entire performance, with room to spare.

One thing we don’t like is that it records onto microSDHC memory cards. It’s a necessary evil, however, as it keeps the camera compact. The problem with microSDHC, as anyone with certain smartphones can attest to, is that they are somewhat tricky to insert and remove, not to mention easy to lose too. But the most noticeable nitpick is the menu interface and its navigation. The four buttons are tricky to navigate, with their icon-based sub menus. However, with experience, this navigation process can be mastered.

If you can get over the tricky user interface – eventually you will – the HD Ghost delivers consistent, high-quality HD video and stills.