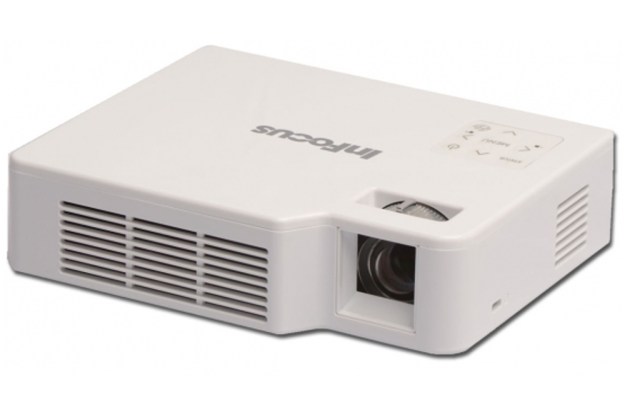 “For those interested in getting a compact, highly portable business projector, the IN1144 is an excellent choice, and it offers the added bonus of being able to pull double duty as a home-entertainment device.”

For as often as the term ‘home theater’ gets tossed around, it is rare that we are able to adequately reproduce the theater experience at home. The issue is a matter of scale (both for sight and sound), and the associated cost of achieving that scale. Those fancy home theaters you see pictures of – the ones that look like a high-end boutique theater or the bridge of the Starship Enterprise – cost big money to put together. But what about those of us with a big empty hole in our basement, or a bonus room upstairs, that are just crying for a budget home theater? How do we bring that big theater experience home without spending at least $10,000? Folks, we’re here to tell you: It can be done.

The trick is in knowing how to maximize your investment. Thankfully, assembling an audio system that can put out huge sound is much easier to afford than ever before. But what about the picture? How do you get that massive image that successfully sucks you into a movie, suspending disbelief and making you feel as if you are in the film, not just staring at it?

The best solution is a projector. While large screen TVs are easier to come by today, they remain expensive. Sharp’s 80-inch LC-80LE632U can be had for around $4,000 online, and it looks fantastic. But that’s still pretty expensive for many. And if you want to go bigger – we’re talking 90-inches or larger – you’re going to have to shell out even more. The right budget-friendly projector, on the other hand, may not be as bright and sharp as an LED-backlit TV, but it will deliver that huge image for a lot less dough.

When InFocus approached us regarding its IN1144 LED projector, we weren’t immediately interested. The IN1144 is positioned as a business projector – the sort you might haul off to a sales presentation or use to display boring training videos. But when we looked into the IN1144’s specs, we had hope it might work as a budget home theater projector. And when we saw the price – $600 – we knew we had to give it a shot. Read on to find out if the IN1144 is a suitable candidate to help fill out your budget home theater dreams.

At first glance, the IN1144 seems too small to take seriously. While some home theater projectors are the size and weight of a small child, the IN1144 is more akin to a hardback detective novel. Measuring in at 6.7 x 5.4 x 1.7 (W x D x H, in inches), and just 1.76 pounds, this projector is compact and light enough to throw in a backpack or briefcase and not feel too weighed down by it.

Despite its relatively light weight, the IN1144 feels solidly constructed. In fact, while mounting the projector, it took a short, accidental tumble to the floor, and came back no worse for it. Count the IN1144 as road-worthy.

In the box with the projector, we found a small card-style remote control, the projector’s power supply, a 6-foot VGA cable, a carrying case, and a brief user manual.

As a business projector, the IN1144 offers some handy features. In addition to an HDMI and VGA input, the unit offers a USB Type-A input and an SD card slot. Either can be used for presentations without a computer. You can display PowerPoint presentations, Word documents, photos and videos directly from a USB thumb drive or SD card. The USB port can make a wireless projector out of the IN1144 with the use of InFocus’ optional wireless USB adapter.

The projector also includes a 3.5 mm A/V input for older sources, and is outfitted with a speaker powered by a rather meager 2-watt amplifier – fine for small room presentations, but not useful for much else. There is a 3.5 mm stereo audio/headphone output available for use with small powered speakers, or larger audio systems if desired.

The IN1144 is powered by an LED lamp, which means low power consumption, low heat output, quiet operation and an estimated 30,000-hour lifespan. The projector is rated to output 500 lumens, which, in a totally dark room, is brighter than you might think.

The rest of the projector’s specs read like a much more expensive projector. It offers 40-degrees of automatic keystone correction – that means you can mount it well above or below your screen and it will adjust the image to look flat. It can be used as a front projector or rear projector, with switching between the two options just a couple of button clicks away.

The IN1144 has a fixed lens and a throw ratio of 1.4:1. Practically speaking, this means that the projector needed to be placed about 116-inches away from a 90-inch 16:9 screen to get 105 diagonal inches of image. That’s a shorter throw ratio than the Viewsonic Pro9000 LED projector we tested the IN1144 next to. This could be an advantage or a hassle for users, depending on projector placement options.

The projector screen used in our IN1144 review was a 90-inch wide, 16:9 format, Da-Lite Easy Install with CSR (controlled screen return) retractable screen with matte-white surface. With this screen, we are able to achieve a 105-inch diagonal, 16:9 aspect ratio image. The screen runs about $700 at retail, which outclasses the IN1144, but even still, the combination comes in at just $1,300.

Our primary source for this review was the Oppo BDP-103 Blu-ray player. The BDP-103 was connected both directly to the IN1144, and indirectly through a Marantz SR6005 A/V receiver’s HDMI pass-through output. We also used an Asus Zenbook Prime and its HDMI output as alternate source.

The IN1144 offers some basic settings, so we adjusted its output to give us the best possible image using the Spears & Munsil Blu-ray benchmark disc as reference. The IN1144 does not use numerals to identify some settings, so we can only tell you we set brightness at about 60 percent, contrast at 80 percent, sharpness at 50 percent, Gamma at 0, BrilliantColor at 7 and color temperature at 7.

We started our evaluation of the IN1144 with the lights on in our testing room. Even with two 60-watt bulbs ablaze in the room, the projector’s white boot-up image shone brightly against our Da-Lite projection screen. Once our laptop’s desktop was visible, we were surprised to see everything very clearly, despite the abundance of ambient light.

When we moved on to view some photos, image quality suffered in the illuminated room, but the pictures were still clearly visible. We wouldn’t recommend trying to use this projector in a well-lit room, but those intending to use it in a business environment where light control is often a challenge should find IN1144 is capable of getting the job done, even when room lights are merely dimmed.

We then killed the lights, pulled up an animated movie on Netflix (in HD, of course) and began watching. The colorful kid’s flick looked far better than we had expected from the $600 projector. Colors were vivid and bright, and resolution, again, was better than we had anticipated. We made the mistake of performing this test with children around, so Curious George 2 ran its course before we could move on.

With the IN1144 having easily passed muster with a young audience, we queued up some more mature material on our Blu-ray player. Since the Oppo BDP-103 offers dual HDMI outputs, we were able to switch between the IN1144 and the much more expensive Viewsonic Pro9000 with relative ease.

The IN1144 looked even better displaying 1080p content. Lines were a bit sharper, and details were more prominently exposed. For an inexpensive projector, the contrast seemed decent. But when we got into some dark scenes, we weren’t too impressed with black levels or shadow detail. While viewing Prometheus, the letterbox bars on the top and bottom of the image were more of a dark, murky grey than they were a shade of black.

We quickly switched over to the $4,000 Viewsonic Pro9000 to make an admittedly unfair comparison. In contrast, the Pro9000 offered much deeper blacks, and details that were missing with the IN1144 suddenly leapt off the screen.

We switched back to the IN1144 and continued watching movies and playing video games with it over the next couple of weeks. To be sure, the projector fares better with brighter films, but it’s less than optimal performance with darker material should not be construed as a mark against the IN1144. We’ve seen projectors costing $1,000 and more with black level performance that wasn’t a whole lot better. More importantly, our whole family enjoyed going out of our way to watch movies on the big screen, rather than settle for the 42-incher in our family room. The experience was simply more fun.

We did run into a couple of problems with the IN1144, which we have not yet been able to confirm were relegated to the particular sample we tested: When the projector was connected via HDMI to either our A/V receiver’s HDMI output or to a DVDO wireless HDMI system, the projector was unable to register a signal. It simply skipped right over its HDMI input searching for a signal elsewhere. In the end, it was necessary to connect the IN1144 directly to our Blu-ray player in order for it to register a signal. We will conduct further testing and update this review – and possibly its score – with any new information we gather.

We took the InFocus IN1144 way out of its comfort zone. An engineer at InFocus even told us point-blank that trying to get a 100-inch or greater image from this projector was ill-advised, but we were plenty pleased with how well the little guy did at that scale. To be clear, this is not a projector for videophiles. Hell, it isn’t really meant to be a home theater projector, for that matter. Yet, it has the ability to function in that capacity for casual viewing. For those interested in getting a compact, highly portable business projector, the IN1144 is an excellent choice, and it offers the added bonus of being able to pull double duty as a home-entertainment device. But the IN1144 projector might also make a solid entry-level projector for those that just want to watch movies on a big screen without having to break the bank assembling a system. At just $600, the IN1144 can be married with a number of inexpensive or even homemade screens, potentially providing a big-screen solution for under $1,000.