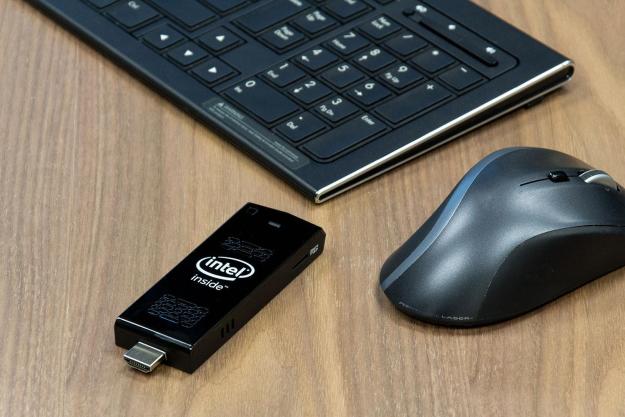 “Intel’s Compute Stick can be your only PC, but you may not want it to be.”

The last two years have witnessed a revolution in home media streaming. Devices like the Chromecast, Amazon Fire Stick, and others have changed media streaming from something attached to a larger device, like a Roku or a computer, into a service that easily hides behind the smallest display.

Computers are following the same path. So-called Stick PCs running Android have been around as long as media streamers, but their inability to handle Windows severely limits their appeal. Now computers of the same size have become powerful enough to handle a full install of Windows 8.1. The first examples, such as the CTL Compute Stick, appeared at the beginning of the year.

While a number of small manufacturers rushed to market first, Intel was the inspiration for the surge. Rumors about a tiny new PC called the Compute Stick started to circulate in October, and Intel confirmed them at CES 2015. Now, four months later, it’s finally here.

The Compute Stick is not difficult to explain. Measuring about four inches long, an inch and a half across, and a half-inch thick, the device connects directly to a display’s HDMI port. It has an Intel Atom Z3735F quad-core processor, two gigabytes of RAM, and 32GB of onboard storage. And the price? Intel hasn’t set an MSRP in stone, but it expects the thing will ship near $150.

That’s not much, but it could still be a raw deal if the Compute Stick is too slow. Is this an affordable, pocketable PC you could use every day, or a novelty that’s more interesting to read about than actually use?

Not much to look at

A stick PC is not meant to be looked at, and the Compute Stick seems built with that in mind. It’s nothing more than a slim black slab of plastic, one side glossy and the other matte. Fan vents dot two small portions as the Compute Stick’s quad-core does occasionally require active cooling. Intel told me the review unit may not look exactly like the final version, but I doubt what ships will look much different. And even if it does, who cares?

What you may care about, though, is how the stick’s connections are laid out. The HDMI output is obviously important, and it can be the source of some trouble. The Compute Stick is about twice as wide as an HDMI jack, and that can cause conflict with other nearby connections. We found this most troublesome with monitors that “hide” inputs on a bottom lip or ridge, rather than letting devices stick straight out the back. The Compute Stick comes with a six-inch HDMI extension cord to get around this issue.

The only inputs are a single USB 2.0 port and a MicroSD card slot. There’s also a mini-USB port, but it’s for power rather than accessories. Such limited connectivity may be an issue for users who lack a wireless mouse and keyboard combo. Thankfully, the Compute Stick also supports Bluetooth 4.0, which can help side-step the problem.

802.11b/g/n wireless is the only option for Internet access. While strong enough to provide a quick and reliable experience, I did notice the connection was a tad weaker than other devices I’ve recently tested (mostly laptops). This may be an issue if you’re using the device in an area with spotty wireless access.

Our Compute Stick came with the Atom Z3735F, which has four cores clocked at 1.33GHz with a Burst frequency of 1.83GHz. That sounds impressive, but Atom’s architecture is nowhere near as quick as Core’s, and its limitations quickly became apparent in Geekbench.

Intel’s stick does beat the CTL version we tested last December, but otherwise the device comes in well behind other modern systems. Even the Asus Zenbook UX305, which is on the slow end of modern notebooks, offers twice the performance. (It’s also several times more expensive, so it’s not entirely a fair fight.)

Our hard drive benchmark, CrystalDiskMark, told a similar story. We recorded sequential read bandwidth of 164.9 megabytes per second and writes of 78.2MB/s. That’s much slower than you might expect given that the Compute Stick uses solid state storage, but given its price, Intel obviously can’t use the best. Again, Intel’s hardware beats the CTL version, which scores 155MB/s in reads and 46MB/s in writes.

If the Compute Stick’s performance in the above benchmarks were poor, then its scores in 3DMark were a disaster. We recorded a Cloud Gate score of 976. By comparison a Core i5 NUC scored 5,120 and the Asus Zenbook UX305 scored 4,203. Even the most rudimentary 3D games won’t run well on the Compute Stick, including those based in a browser. 2D games can be an issue too, though they typically are smooth enough to play, even if an occasional hiccup spoils the fun.

The numbers paint a clear picture: Intel’s Compute Stick is no speed demon. On the contrary, it’s one of the slowest devices we’ve recently tested. Even Atom-powered notebooks from 2014 typically score better.

What the numbers don’t tell, though, is whether the Stick is fast enough for normal day-to-day use. The only way to determine that is to actually use it, for hours at a time. So that’s what I did. The verdict? It’s fast enough. Barely.

1080p video is smooth no matter the streaming service you use.

Media is where the system shines. 1080p video playback is a cinch no matter what service you use. Hulu, Netflix, and YouTube all easily play at full HD. I’m talking about an essentially perfect experience. No random pauses, no audio de-synchronization, no dropped frames. Watching a movie on the Compute Stick is the same as watching it on Chromecast or any other media streaming box. This is true whether you’re watching through a browser or viewing media files played back through dedicated software.

The limitations of the Stick aren’t obvious in the browser, either — at first. Websites load quickly, though perhaps not as quickly as on a Core-powered system, and scrolling is generally smooth. Even complex web pages, such as Google Documents and Word Online, are easily handled. Trouble only appears with websites that overuse Adobe Flash and Shockwave. Those plugins crashed on several occasions. Of course, given their reputation, it’s hard to lay the blame entirely at Intel’s feet.

Open multiple browser windows simultaneously and problems appear. There’s no specific symptom to point to, but rather a general lethargy that impacts almost every aspect of web browsing. Tabs suddenly refuse to close, or don’t open fully. Website elements become mis-aligned for no reason. Scroll bars go on lunch breaks. The Compute Stick simply doesn’t have the processing power and RAM to handle numerous, content-rich websites at once.

What happens in the browser foreshadows the overall experience. As long as you stick to one thing at a time, you’re fine. Even editing photos in GIMP, a free Photoshop-like application, was a cinch. Sure, a large file might take several seconds to save if exported to a large file format, such as .BMP, but such inconvenience was hardly an annoyance. Applications only slow as you open a large number of them. GIMP? No problem. Five images in GIMP with Word, OneNote 2013, and a web browser in the background? The Compute Stick starts to seriously drag.

Can the Compute Stick be your sole computer? Yes, absolutely. It can run everything any other affordable desktop can except games. The question is not whether this device can be your only PC, but whether you’d want it to be.

That’s a tougher sell. The Compute Stick’s $150 price tag is very low, but it’s not that low. A number of companies including Asus and HP sell Windows 8.1 notebooks for $200 or less, and those systems typically have a quicker processor. The HP Stream 11 is perhaps the most notable example. It offers an 11.6-inch display, a 2.16GHz Intel Celeron processor, two gigabytes of RAM, and a 32GB SSD (with a terabyte of OneDrive for one year) at $200 even. If you’re looking for a PC at a very low price a tiny notebook makes more sense.

Of course, a notebook won’t be as easy to plug into a television, and Intel referenced streaming video and games several times in the press materials sent to us. It’s certainly true that the Compute Stick can function as a media PC, but it’s far more expensive than a Chromecast or even an Apple TV, and it doesn’t come with a handy remote. That means you’ll be spending even more for a similar remote that probably won’t work as well.

This leaves the Compute Stick with a tiny slice of a Venn Diagram representing people who need a cheap PC and people who want a media streaming stick, but can’t afford to buy both. I’m sure there are people who fit into this very precise category, but it’s hardly the foundation of a revolution in computing.

For most people the Stick will prove more of a novelty than useful device.

Topics
Best Samsung Galaxy Note 20 deals for December 2022
Google is now supporting my awful browser habits, and I love it
Old tech sounds preserved as part of huge audio project
In just three years, 30% of PCs may be built on ARM architecture
What to expect at CES 2023, from mondo TVs to EVs
12 high-profile tech opportunities for those job hunting
Make tech work for you: 10 side gigs to make extra money for the new year
CES 2023: Intel’s new 13th-gen CPUs are faster, cheaper, and more efficient
GeForce Now upgrades to RTX 4080 for 4K 240Hz cloud gaming
Nvidia brings the mighty RTX 4090 to laptops at CES 2023
Belkin just made a huge bet on sustainability at CES 2023
CES 2023: AMD Ryzen 7000 laptops CPUs go up to 16 cores
Amazon Alexa aims to streamline the EV charging experience