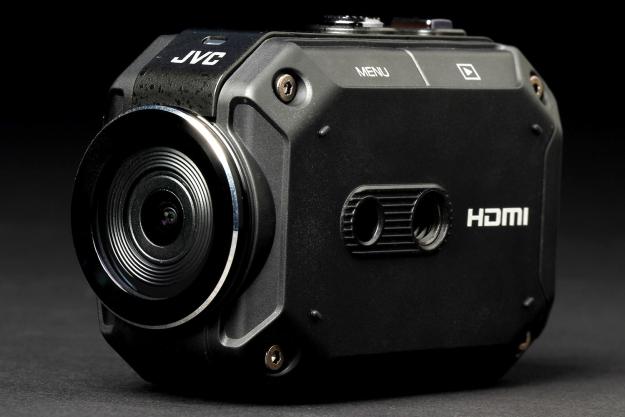 “If you’re in the market for a rugged camera for capturing all of your outdoor exploits, the JVC Adixxion GC-XA2 should be on your list of serious competitors.”

If you didn’t know any better, you would have thought GoPro, with its brilliant marketing, is the only company that makes action cams. They deserve credit for making a compelling product and for igniting this once lackluster camcorder category, but there are other players as well, such as JVC. The JVC Adixxion GC-XA2 ($299) is the follow-up to last year’s GC-XA1. It offers a lot of improved features at a much more affordable price point than many of its competitors, but also delivers on performance.

The GC-XA2 offers a wealth of improvements over its predecessor, the GC-XA1. Starting off, the XA2 offers full 1080p/60 Full HD recording via an 8-megapixel back-illuminated CMOS sensor. It features an improved, fast f/2.4 wide-angle lens that offers expanded 137-degree field-of-view at 1080p. Combined with the back-illuminated sensor, the GC-XA2 is designed to handle low light. In terms of resolution, GoPro’s high-end Hero and its 4K-resolution capture has the XA2 beat.

The GoPro Hero may be the “sexy” action camcorder, but JVC does offer compelling features in the XA2.

The XA2 offers a variety of shooting modes, including an “endless recording mode” captures 15-second clips until your storage is full – once your SD card is maxed out, the camera overwrites your oldest clip with the newest one. This is a useful feature if you are using the camera on your dashboard or mounted to your handlebars. Time-lapse shooting is available starting at 0.2 seconds and up to 60 seconds, and slow motion shooting is available at 720p (at 100p or 120p). You can also shoot photos in time-lapse or burst modes. The XA2 uses standard-sized SDHC cards, which we think is more convenient than Micro SD variants.

Billed as a “quad-proof” camera, the XA2 is waterproof to a depth of 16 feet, shockproof (able to withstand drops of 6.6 feet), dustproof, and freezeproof. No matter what your outdoor activity entails, the XA2 should be able to withstand much of what you throw at it.

Unlike many competitors in the action cam space, the XA2 has a built-in LCD – a 1.5-inch, 112k-color display with auto-off and auto brightness.

When it comes to connectivity, the XA2 has built-in Wi-Fi. Available for iOS and Android, the app, called the Adixxion Sync, allows you to control up to four Wi-Fi-enabled Adixxion cameras from a single smart device. The app can also upload content to YouTube or live-stream to Ustream. The Adixxion Sync has a simple interface and is easy to use. During testing, there was some lag between the camera and the phone when trying to use it as a remote display, but overall the app worked well. You’ll need to look for it in the App Store or Google Play as “Adixxion,” not JVC.

The Addixxion line of action camcorders is geared toward ease of use, with only six buttons to deal with – more than some other POV cams, but they give you greater navigation controls. On the top you’ll find the on/off button and the record button. On the left side of the camera you’ll find the menu and playback buttons, and on the right side are two zoom buttons that also double as menu navigation buttons. One minor issue, however, is that we thought the buttons were too stiff and hard to press.

The bottom and side of the camera each have a standard tripod mount, and JVC offers a varied line of accessory mounts for them. The XA2 comes with an adhesive wide flexible mount. This mount would be useful for using the XA2 as a dashboard-mounted camera or helmet mounting, but there’s limited utility beyond that. Available at extra cost are eight different mounts, a diving case, supplemental lens protector, and others. The wide variety of available mounts certainly increases the applications of this rugged camera, but we wish JVC had thrown in one or two more.

Included with the XA2 are a removable battery, Micro USB cable, and wide flexible mount. There is no AC charger included, but one is available at extra cost if you don’t want to charge via a USB port.

The XA2 performed well when we put it to use in the real world. We tested as many of the rugged aspects of this camera as we practically could, and it withstood all the punishment including drops, a dip in a 65-gallon aquarium, and a stint in the freezer.

Video quality was nice and smooth in various lighting conditions, whether outdoors or in dimly lit subway stations. The image quality is especially good under normal bright situations, with pleasant but soft color saturation and sharp detail. Low-light shots in a dark room weren’t awful, although you’ll notice the noise and loss of details. The XA2 does a good job at keeping things in focus. The gyro-based digital image stabilization did a nice job of keeping things pretty smooth despite vibrations from handholding the camera and walking around. Still, from the video you’ll notice that image stabilization can only do so much when you’re jostling the camera around.

JVC doesn’t tout the camera as having a windscreen built into the microphone, but we were impressed with the lack of wind noise when using the camera outdoors, an issue we encountered with the XA1. When recording underground in the subway, sound was clear and undistorted. Overall, the JVC does a nice job recording audio as it does in recording video.

While the Adixxion is great at capturing video, we wouldn’t recommend it for shooting everyday still photographs – that’s the case with all POV camcorders. It was hard to get sharp images in low light, and the unusual field of view isn’t suited to most types of shooting. It will work fine in a pinch – photos don’t look bad at all under normal lighting – or maybe some artistic use of the wide FOV, but don’t expect great results overall.

When it comes to operation, the XA2 is a very easy camera to use. As mentioned, a minor complaint is that the buttons are pretty stiff and require firm pressure in order to register a press. While this is desirable to avoid unwanted button pressing during active use, it did make using the menus a little more difficult than necessary. Overall, this is only a minor annoyance since this isn’t the type of camera where accessing the menus is frequent.

Much like the camera, both the Android and iOS versions of the app were easy and straightforward to use. Creating a direct Wi-Fi connection between the camera and the phone was a snap. Once we were connected we found the Adixxion Sync app to have an intuitive interface that was easy to use. Not only do you get a live view image, you can also make all the settings adjustments from the app – far easier than going through the menus on the camera. There was some lag between the camera and the phone when trying to use the phone as a secondary display, but overall the app worked well and provided more utility than most other apps. Note that your YouTube and Ustream account info can only be entered via the app and synced to the camera; there is no way to directly input this information through the camera directly.

The GoPro Hero may be the most well-known and “sexy” camera in the outdoor camera realm, but JVC is offering a very compelling product with the Adixxion series of cameras. The XA1 is still available for purchase, but it’s hard to not recommend the XA2 considering the wealth of improvements it offers over its predecessor. If you’re in the market for a rugged camera for capturing all of your outdoor exploits, the XA2 should be on your list of serious competitors. For the price, this rugged video camera is difficult to pass up.