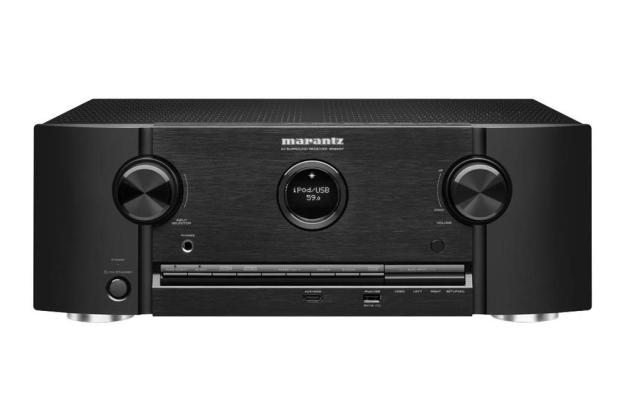 “If you’re in the market for a performance-oriented receiver at around $1,200, the Marantz SR6007 should be at the top of your list.”

We’ve reviewed a good number of Marantz’s receivers over the years, including the SR6004, SR6005, and SR6006. The SR6004 and SR6006 specifically stood out as solid performers, artfully balancing features and performance few can match at the $1,200 price point. The SR6007 is Marantz’s latest offering, and it includes a couple of new goodies. Let’s see how it stacks up against its predecessors.

Visually, the Marantz SR6007 doesn’t look much different than the SR6006. Both feature Marantz’s signature star-and-circle porthole display and curved front fascia edges. We think it’s quite a refreshing change from the sometimes garish and literally glaring “big screen” displays found on other A/V receivers.

In the box, we found a pair of AAA batteries, a slim remote control, detachable power cord, an FM antenna, Audyssey setup mic, printed quick start guide, and a CD-ROM manual. Note however that Marantz no longer includes a full paper manual with the SR6007; however, one can be downloaded or printed from the CD-ROM.

While Marantz has carried over many of the same features and design cues from the SR6006, its replacement does sport a couple of key differences. The SR6007 now includes 4K and 3D video pass-through for more future-proof video compatibility. It also adds Spotify access (premium account required) in addition to its existing networking features, such as access to Pandora, Napster, Rhapsody, Flickr, and a multitude of Internet radio stations. Other networking niceties, like Apple’s AirPlay and DLNA compatibility, have also been carried over.

While the SR6006 came with a learning remote, the SR6007 features a more streamlined, “simple” remote control with far fewer buttons. Sadly, it still lacks any backlighting, save for the single “main” button at the top left corner, which lights up whenever a control button is depressed.

We’ll have more to say on the remote when we get to the receiver’s performance, but for now, here’s a quick run-down on the other changes to the SR6007:

Other than those listed above, the Marantz SR6007’s feature set remains mostly unchanged from the SR6006. That doesn’t necessarily have to be a bad thing, especially considering Marantz’s reputation for making gear that, first and foremost, makes your system look and outstanding. The SR6007 still features the same amp and processor, phono and headphone inputs, and Audyssey MultiEQ XT correction. Still, we would’ve liked more feature upgrades, if only to differentiate it from its predecessor.

Once we set up the calibration microphone in the correct positions, total auto setup time using Marantz’s built-in Setup Wizard and Audyssey program took about 25 minutes. Per our usual practice, once we completed the wizard, we went back into the receiver’s manual set-up menu to double check its settings. While things like distance and phase were spot on, we noticed that one annoying Audyssey gremlin remains: It still sets the crossover points for our speakers much too high, thereby incorrectly defaulting the front speaker sizes to a “small” setting. [Editor’s note: THX recommends speakers be crossed over no lower than 80Hz, though not everyone agrees this is the best practice for all systems.]

Granted, where you choose to set your speakers’ crossover points could also be a matter of taste. But we’ve measured clean response down to at least 55Hz, 80Hz and 120Hz on our front towers, center, and surround speakers respectively, and for some reason Audyssey felt compelled to set them at 80Hz, 150Hz and 250Hz. And since we don’t quite cotton to prematurely cutting off the response capabilities of our speakers, we reset their crossovers to the appropriate values. Bottom line: We’d still recommend starting with Audyssey and the Setup Wizard; just be sure to double check the receiver’s settings once it’s done.

After setting up the SR6007, we then checked for any available firmware updates. Apparently there was a whole slew of them — about 20 minutes worth. It was definitely a drag having to wait, but we figured it was better to get this out of the way right up front than to have the receiver stop us for updating in the middle of the movie.

We started our listening tests of the SR6007 with a few well-known movies and television shows, including the opening chase scene from Quantum of Solace. Within seconds of Bond’s gorgeous Aston Martin revving into high gear, we could easily hear how much bigger, bolder, and gutsier the sound from this movie was compared to our standard receiver, the already excellent Marantz NR1602. The SR6007 delivered a much more dynamic and room-filling sound with headroom to spare. Various sonic details, such as the shattering of glass and the clink of bullet shells hitting the ground, were easier to discern than with our everyday receiver. Simply put, the larger, more powerful Marantz delivered sound and Foley effect — both loud and quiet — with greater realism and more refinement than we’re used to hearing.

We then cued up a variety of music discs to get a handle on the SR6007’s musical prowess, and we were immediately greeted by that signature Marantz sound: full and rich with a slight hint of warmth, though mostly tonally neutral. The Marantz seemed to take just enough edge off of older, harsh-sounding rock albums, like AC/DC’s Back in Black or Stone Temple Pilots’ Purple, while still delivering all of the punchiness in the bass and dynamic range.

But the SR6007 also shone with complex acoustic music, such as symphonic classical and big band. For example, the Marantz receiver delivered all of the scale and timbral subtleties present in the First Movement from Michael Tilson Thomas and San Francisco Orchestra’s recording of Mahler: Symphony No. 1 that most A/V receivers in this price range simply miss. True to its heritage, the Marantz SR6007 always sounded excellent with music of any genre, providing leading class sound.

We then decided to hook up our turntable to the SR6007’s phono input for some vinyl-spinning action. We found it sounded as good as phono stages typically included in Marantz’s other receivers, delivering a well-balanced if slightly bright sound. It was definitely better than the usual noisy and low-gain phono stages found in other makers’ receivers, and there was enough analog warmth in the bass and lower mids for us to soak up all of the musical goodness our vinyl had to offer.

We also tested out various sets of headphones through the SR6007’s headphone output and found it to sound surprisingly good as well. It carried over the same rich and full-bodied sonic signature as the rest of the receiver while maintaining a low noise floor overall. While it couldn’t compete with a separate headphone amp, those who only occasionally use their cans for serious listening should be more than pleased with the sound quality of the headphone jack.

Functionally, the Marantz SR6007 performed just as well as the previous incarnations of this receiver. We were able to access its networking and applications features instantly and without a hitch. What’s more, AirPlay now comes pre-activated in the receiver: No more copying serial numbers and ID codes to register the receiver on Marantz’s website. Simply let the Setup Wizard do its thing and that’s it. Our iPhone 4 had no trouble finding the SR6007 and was streaming tunes to it in an instant.

We did, however, have one bone to pick regarding Marantz’s iPhone remote app: It simply wasn’t any fun to use. Navigating it was anything but intuitive, and its functions are woefully limited. That’s actually quite a surprise, since the remote app for the NR1602 is fairly thorough and much easier to use. We were all too happy to go back to using the SR6007’s standard remote control.

We’ve got to admit, we were pleasantly surprised by the Marantz’ Audyssey MultiEQ XT program. It’s a noticeable step-up over its lower-line sibling, MultiEQ, that’s found in our NR1602 receiver. Usually, activating Audyssey EQ would make most high-quality speakers sound worse. That’s not the case anymore, though. We thought it did a fairly good job of smoothing out the frequency response anomalies from movies.

If you mostly listen to music, however, we’d recommend leaving it off altogether: Audyssey simply robs too much tonal color and realism. Fortunately, it’s easy to switch XT on and off through the Marantz SR6007, so trying it both ways is a no-brainer.

While we didn’t have a way to test its new 4K and 3D video capabilities, we did try the Marantz receiver with tons of hi-def Blu-ray movies. We enjoyed every second of it. Its picture looked noticeably better than the same video signals through the NR1602. We could see sharper, better defined images with better shadowing, color contrasts, and finer detail overall.

In streamlining the receiver’s functionality, the SR6007, unfortunately, isn’t as easy to adjust as its predecessors. Gone is the ability to tweak individual speaker levels directly from the remote — the only access point is now in the setup menu. Though Audyssey does a pretty good job of getting the speakers balanced with each other, we miss being able to quickly boost or trim the volume on individual speakers when the movie calls for just a bit more dialog from the center channel, or a bit less woofing from the sub.

Also missing is the status/OSD function. This button allowed viewing of real-time status information (such as the receiver’s surround listening mode, input signal type, and video resolution). Again, this feature can now only be accessed by navigating through the setup menu. In reality, we doubt these omissions will be of concern for most average users, but we’ve got to wonder why Marantz felt compelled to take these useful features away.

All in all, we really enjoyed our time with the Marantz SR6007 receiver. Its sound is still among the best in its class, and it even adds a couple of new features as well. Its networking functions work without a hitch and the receiver is generally easy to set up and use. And kudos to Marantz for not forgetting about us two-channel analog fans by continuing to include a phono input. Based on these factors alone, we’d give this receiver a solid 8.5 out of 10.

Still, its minor functionality omissions and disappearing inputs and outputs do bring the score down just a bit. And we really would’ve liked more adjustment features, especially on the remote and mobile remote app. But if sound quality is your top priority, you could certainly do a lot worse, and probably not much better without spending crazy loot. If you’re in the market for a performance-oriented receiver at around $1,200, the Marantz SR6007 should be at the top of your list.