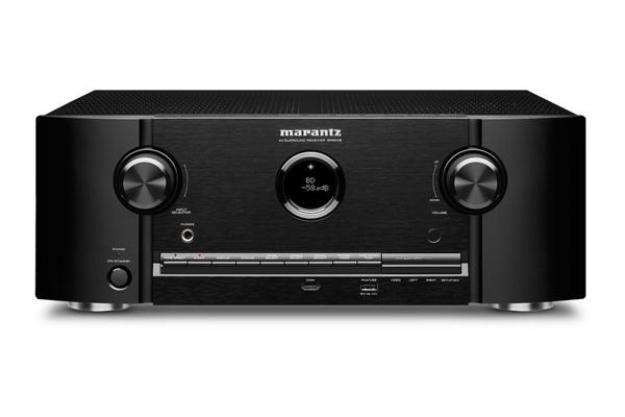 “Network streaming and AirPlay capability catches the Martantz SR6006 up with its competition, making it a welcome new model in Marantz’s A/V receiver line.”

Wow… It’s February already, which means it must be time to continue our Marantz A/V receiver review legacy with a look at what’s new from the company this year. We started with the SR6004, then covered the SR6005, and now it is time to visit with the new SR6006. To save you a little time and provide some background, here’s a breakdown on how this model has progressed so far:

We loved the SR6004. It earned a 9.5 rating and our Editor’s Choice award for being one of the best-sounding A/V receivers we’d tested while packing in plenty of desirable features. The price at the time was $1,250.

We didn’t go quite so gaga over the SR6005. While still a very fine receiver (it’s on our test bench, as a matter of fact), we felt some of the changes Marantz made served to take a little away from the receiver’s value. Granted, the receiver’s cost dropped $250, but we missed the included Bluetooth dongle, and the change-up to the digital-to-analog converters (DACs) ended up both diminishing its sound quality a little bit and removing SACD decoding capability. We were a little bummed and, as such, awarded the unit a 7.5 rating and recommended product status — not too shabby.

While we had to dig for the differences between those prior years, the changes that have been made for the $1,200 SR6006 are plentiful and, in some cases, plainly obvious. In our Marantz SR6006 review, we pour over what’s new for this year, describe our testing and evaluation experience and offer up our take on whether this unit puts Marantz back on top as the mid-level A/V receiver to beat.

The change to the Marantz SR6006’s face is one of those plainly obvious differences that hit you as soon as you pull the receiver from its box. The SR6006 now sports what Marantz calls its “star and circle porthole.” We’re not crazy about the name, but we dig the look and think it does a lot to make Marantz’s products stand out amongst the sea of black boxes that line electronics store’s shelves. Not only that, but the unique porthole – along with the slim-line control buttons, symmetrical control dials and radius edges – will probably grab plenty of the right kind of attention at home, too.

In the box with the receiver we found three AAA batteries, an AM loop antenna, FM indoor antenna, a starter guide and a full user manual printed on actual paper (the industry seems to be moving toward digital manuals on CDs or, better yet, thumb drives) and, what’s this… a newly designed remote? We’ll definitely be giving that a thorough look.

As we said, Marantz folded a lot of changes into the SR6006. We’re going to cover some of the more notable of those differences in some detail and simply list the rest.

Foremost, the SR6006 is finally a full-fledged network receiver. The newly installed Ethernet port allows access to Pandora, Napster, Rhapsody, Flickr and a gazillion Internet radio stations. Since the SR6006 is DLNA certified, it will stream music, pictures and some video files from any media center, laptop, desktop computer or network attached storage (NAS) device on the same network. This Ethernet connection also allows for firmware updates that don’t require a service technician.

Then, of course, there’s AirPlay. Having AirPlay built right into a receiver is a big deal because it really is the easiest way to play and control your iTunes library through a large-scale sound system. It also makes us care a whole lot less that Marantz’s RX101 Bluetooth receiver is a $100 accessory.

Considering that Marantz’s move to an Analog Devices SHARC processor in the SR6005 was one of our chief complaints, we decided to take a look at Marantz’s website to determine what, if any, changes were made to the DAC for the SR6006. The specs page for the SR6006 indicates it uses an “Analog Devices SP21487 / 400mHz” which, initially, might sound like a change. However, as best as we can tell, it is still a 32-bit SHARC processor, and is meant to be the best Analog Devices offers for consumer audio solutions. Bottom line: We don’t expect to hear much of a difference at this point.

The most exciting change for us is the addition of a Phono input! We really missed this with the SR6004 and SR6005, and we are thrilled to see it has finally arrived with this model. We simultaneously noted that Marantz has removed the Sirius/XM Satellite Radio antenna input. Since the service is available via Internet radio and/or iPhone, it’s no real loss. Certainly no tears being shed here, especially if doing so made room for the phono pre-amp.

But…Marantz, what did you do to your remote? For us, a backlit remote is essential and even expected with an A/V receiver at this price point. Glow-in-the dark buttons are great for the first 15 minutes after the lights are dimmed but, after that, pretty useless. Gone as well is the little LCD display at the top of the remote, but we never found it all that useful anyway. Otherwise, the remote is very similar to previous models with most critical functions covered.

As promised, here are the remaining changes made over prior year:

• New Composite out for zone 2

• HDMI out from 1 to 2 (simultaneous output capable)

Our first order of business was to make a sound quality comparison between our SR6005 and the newer SR6006. Frankly, we didn’t expect to hear a difference, but we sort of wanted to anyway. With pre-conceived notions more or less in check, we got down to business figuring out how we would pull off an A/B comparison between two receivers with quick enough transitions between the two units to make any differences a little more obvious. Ultimately, we ended up building a simple switch box which allowed us to bounce back and forth between each receiver’s output. The Oppo’s dual-HDMI outputs certainly made this task a whole lot easier, too.

We placed both receivers in pure-direct stereo mode and got to listening. We bounced back and forth between the two for about half an hour before we decided there was no appreciable difference in sonic signature between them. If the DACs in the SR6006 do differ from those in the SR6005, the distinction is certainly not obvious.

As far as our subjective tests could determine, the SR6006 sounds identical to its predecessor; which is to say, it sounds very, very good. We like the way the SR6006 adds just a touch of classic Marantz warmth to everything it plays. Overly bright music tracks are tamed ever so slightly and brash movie tracks are brought back to reality without losing any of their zeal. Indeed, the SR6006 maintains this line’s position as one of the best-sounding A/V receivers available in the $1,000 to $1,500 price segment.

We then busted out some of our favorite vinyl recordings and gave the SR6006’s phono input a workout. While we were not able to do a direct A/B comparison, we felt the built-in phono pre sounded very similar to the one installed in the recently reviewed PM6004 integrated. We got sparkling treble (which seems to defy the otherwise warm Marantz sound), open midrange and some pretty decent bass as well. Certainly a step above what we’re used to getting in an A/V receiver.

Next we dug into the SR6006’s new network media offerings. We started out by streaming some music from a network attached media center PC. The experience was very similar to that which we experienced with Denon’s AVR-3312ci – as a matter of fact, from a firmware and GUI perspective, the two are nearly identical. Navigating to files is a matter of wading through folders and still a bit sluggish for our liking. That’s DLNA for you. With that said, the WAV files and high-bitrate MP3 songs we streamed sounded excellent. We never did manage to stream any FLAC content, though. Marantz says nothing about FLAC compatibility on its website, but considering the Denon AVR-3312ci does it, we’d hoped the SR6006 would too.

AirPlay testing did not start out so well for us. We spent close to three hours trying to wrangle a wireless router, four-port Ethernet switch, a laptop and an iPhone 4S into playing nicely with the SR6006 in our testing lab, but it never happened. In fact, the SR6006 threw our entire network into a tizzy. We had to reboot our wireless router at least five times. Frustrated, we disconnected the SR6006, packed it up and headed into DT headquarters to give AirPlay another go.

Of course, the receiver’s AirPlay functions worked flawlessly from the second we powered up the receiver in our office. It turns out that our six-year-old wireless router just wasn’t up to the task. So, for those with older routers, don’t be surprised if you run into some trouble. Maybe consider an upgrade. We certainly are.

What we found particularly interesting was that we had no issue whatsoever streaming music from our iPhone 4S to the SR6006 receiver. We were unable to successfully stream from our 4S to either the Klipsch G-17 Air or B&O Beloit 12 due to hardware compatibility issues that Apple promises will be taken care of by its forthcoming iOS update. Why we didn’t suffer through a similar problem with the SR6006, we don’t know, but we sure appreciate that AirPlay worked so flawlessly.

Network streaming and AirPlay capability catches the SR6006 up with its competition, making it a welcome new model in Marantz’s A/V receiver line. After the disappointment of its immediate predecessor, the SR6006’s updated feature set and Phono input left us feeling a lot more warm and fuzzy toward this receiver.

There are a lot of similarities between the Marantz SR6006 and Denon AVR-3312ci, but the selective differences between the two seem to maintain brand definition. While we liked the Denon’s more flexible amplifier output assignments and ability to stream FLAC audio files, we prefer the Marantz’s overall sound quality and think it looks a lot sexier, too.

Topics
New phishing method looks just like the real thing, but it steals your passwords
This new Windows 11 feature will help you protect your passwords
This Microsoft Teams exploit could leave your account vulnerable
How much storage do you need on your new iPhone 14? Here’s how to decide
Overclockers surpassed the elusive 9GHz clock speed. Here’s how they did it
Amazon starts drone delivery trials in California and Texas
What to expect at CES 2023, from mondo TVs to EVs
12 high-profile tech opportunities for those job hunting
Make tech work for you: 10 side gigs to make extra money for the new year
CES 2023: Intel’s new 13th-gen CPUs are faster, cheaper, and more efficient
GeForce Now upgrades to RTX 4080 for 4K 240Hz cloud gaming
Nvidia brings the mighty RTX 4090 to laptops at CES 2023
Belkin just made a huge bet on sustainability at CES 2023