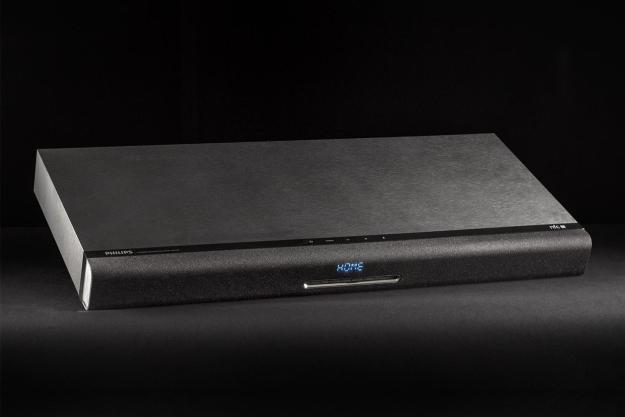 “Those looking to give their TV a serious shot in the arm should give the HTB3525B a long look.”

Few devices embody the all-in-one concept as wholeheartedly as Philips’ new HTB3525B Blu-ray surround base. In one slender box beneath your TV, you get a fully-equipped 3D Blu-ray player, a Wi-Fi-enabled media streaming device, a Bluetooth streamer, and even an FM radio. The only thing missing from this new take on a home-theater-in-a-box system is a TV.

Perhaps just as impressive as its array of talents is the 3525B’s price tag which, at $330 or less, isn’t far off from what you’ll pay for a premium Blu-ray player alone. And while the all-in-wonder’s sound quality isn’t as detailed as what you would hear from a component audio system, it’s plenty powerful enough to take you on a fun ride – which is more than most can say about their TV’s speakers.

As far as sound stands go, the 3525B is definitely of the smaller variety. Pulling open the box revealed a short rectangle with rounded corners, and a smooth black speaker screen hugging the unit’s front face. The piece definitely feels stout, but it was easy enough to handle as we placed it on our TV stand. A silver slot at the front for loading Blu-rays and DVDs hinted subtly at the unit’s wealth of talents, but the unit otherwise blended in well with our Samsung TV on top, exactly as a sound stand should.

On the back, we found a respectable collection of connection ports, including an HDMI output for your TV, digital optical and coaxial inputs, a composite video output, a 3.5mm Aux in, an Ethernet port, and an FM antenna input.

Inside the box we discovered a user manual, a surprisingly well -stocked remote control, a pair of batteries, and an FM antenna cable. Unfortunately, you’re on your own for connecting the 3525B to your TV, as no HDMI or component cables were provided.

Philips does a nice job of cramming so many features into such a minimalist profile. Stretching 27.6 inches across, 2.8 inches high, and 12.5 inches deep, it takes up minimal space on any TV stand, and its 15-pound weight makes it light enough for users to easily set it up or break it down.

Philips does a nice job of cramming so many features into such a minimalist profile.

A sparse selection of touch-capacitive keys above the disc slot – including power, source and volume, and eject – had us thinking we’d better not lose the remote for this baby. We also noticed that the device was a little sluggish to respond to these keys when first fired up.

The rounded remote, on the other hand, is really well designed, with an organized selection of control keys for all of the unit’s features. At the top are hot keys for the 3525B’s key apps – it’s a media streamer as much as anything else – including buttons for YouTube, Netflix, and Vudu. Below that is a Source key, a Bluetooth pairing key, and the all-important Home button. The latter is the best way to back out of any process and land back at the home screen, where all of the system’s apps are laid out next to an icon that represents the Blu-ray player.

We immediately liked the home screen, which has an attractive backdrop and intuitive organization. Philips wisely avoids cluttering up the machine with a bunch of useless apps. All of the essentials for video streaming are there, apart from one major omission: Amazon Instant. With Amazon’s streaming service ramping up both its licensed and original content these days, it’s an important service to include. Still, we wouldn’t be surprised to see the app added as part of a firmware update in the future.

For sonic controls, Philips offers enough to keep you busy and potentially get you in trouble. An EQ icon towards the bottom of the remote triggers the 3525B’s sound options. The unit offers several sound presets such as warm and bright, as well as Automatic, and a custom preset which allows users to set bass, midrange, and treble levels to taste – a welcome option for those times when the movies get … heavy. Also available are stereo and surround modes (though we never heard any convincing surround), and a sync option to handle any digital delays that cause lip-sync problems.

Adjusting settings is easy with a TV connected, as the unit displays large visual guides for everything from volume adjustment to EQ. Without the TV, you’re left with the system’s small LED display at the front, which offers very little feedback.

Also included are basic video adjustments, allowing users to rotate the image, view content as a picture-in-picture image, zoom, adjust color parameters, and even set up a slideshow for viewing photos from a USB drive.

The home screen has an attractive backdrop and intuitive organization

As for the unit’s sonic hardware, the 3525B packs dual 1.5-inch x 5-inch midrange drivers, a pair of 1-inch tweeters, and a down-firing 4-inch woofer, with an excursion that can place it mere millimeters from the surface below it. The upper stereo channels are fed by 20 watts of power each, with a full 40 watts allocated to the woofer.

Other available features for the 3525B include programmable FM radio, Bluetooth pairing (though the device opts for the older 2.1 Bluetooth profile) NFC connection for compatible devices, VOD (video on demand) via DivX, and even the ability to create musical slideshows from personal photo and music catalogs.

Setting up the 3525B is a breeze via HDMI. Simply patch an HDMI cable from the surround base’s output to one of your TV’s HDMI inputs, and you’re ready to rock. Any secondary inputs can be connected to the speaker’s optical or coaxial digital audio connections.

While the surround base takes on a lot of responsibilities, it doesn’t really excel at any of them. The speaker never blew us away with any one attribute in particular, but it does a competent job performing all of its services, and gets bonus points for offering so much from such a budget-friendly piece of gear.

The surround base’s video performance held its own when playing back Blu-ray content. The picture didn’t have the same sort of pop that we’ve seen with high-end Blu-ray players such as the Samsung BD-H6500, and colors tended to wash out from time to time, but those who have yet to step up to the picture afforded by a 1080p Blu-ray player likely won’t be disappointed.

Streaming music over Bluetooth was less impressive, which likely has to do with the older 2.1 Bluetooth profile Philips employed. While fine in the background, a closer listen revealed that wireless streaming may have been an afterthought with this speaker’s design. We started off with Peter Gabriel’s “Sledgehammer,” which was reproduced with powerful waves of sound, forcing us to turn the bass down right away. With EQ adjustment, balance was restored. And although details weren’t cutting especially clear, there was also very little bite in the treble, for which we’re always grateful.

We began our evaluation of video-based audio with an audition of The Office, streamed via Netflix. Straight away, the midrange continued to sound fuzzy and ill-defined. We often lost a bit of clarity in the dialog, but we also appreciated the warmth added to the sound, which is far cry from the cold, one-dimensional, metallic sound from most flat screens’ speakers.

Thanks to some snappy response from the tweeters, we enjoyed some detailed consonant sounds, as well. The attack of dialog provided enough detail that we could follow nearly any conversation in a movie.

The bass adds gravitas that takes action movies from flat and wimpy, to potent and engaging.

That factor was elevated when we called up some of our favorite action movies. The bass didn’t pound into the bottom rungs with the fierce enormity you’d expect from a full on 2.1 system, but it did add that layer of gravitas that takes action movies from flat and wimpy, to potent and engaging. After all, that’s a sound base’s top priortiy in the first place: putting some of the ‘theater’ in home theater.

Running the system through favorites like Skyfall and Pacific Rim, we were generally satisfied with the results. We noticed a few holes where it seemed like the tweeters and midrange drivers didn’t blend very well, but overall balance was decent, and things never got sharp or overblown. In other words: The Philips’ surround base has a meaty punch with enough definition and restraint that you never wonder what was just said, and you never feel like lunging for the remote for quick volume adjustment.

What’s more, it really is kind of cool having so much entertainment live in one box and not totally disappoint. Based on sound alone, the device isn’t something a picky audiophile is going to get excited about. But as a replacement for your television’s wimpy speakers, the surround base excels.

Philips’ new HTB3525B Blu-ray surround base is an enticing component for those who need a simple solution that does it all. If you already have a badass Blu-ray player or preferred streaming box and you’re eyeing a serious home sound solution, this probably isn’t the product for you. However, those looking for a wide swath of comprehensive home theater features, and an upgrade in sound from their flat screen will want to give the HTB3525B a very serious look.

Topics
Upcoming Sonos headphones may well include Wi-Fi
Can hybrid wireless earbuds fix the lossless audio problem?
Sony’s new $300 soundbar connects wirelessly to Bravia TVs
Astell&Kern blurs the line between headphone amp and digital audio player
EVGA’s lost RTX 4090 prototype shows us what could have been
Microsoft’s DirectStorage can now boost your game loading times by 200%
Here’s how you could protect your RTX 4090 from melting
Someone built a PC in a microwave, because why not?
Update Windows now — Microsoft just fixed several dangerous exploits
Nvidia’s RTX 4080 12GB may soon return, but not how you think
This gadget could turn your M1 Mac into a productivity beast
Mayweather vs. Deji live stream: How to watch the fight
We may know the cause of the RTX 4090’s melting connectors