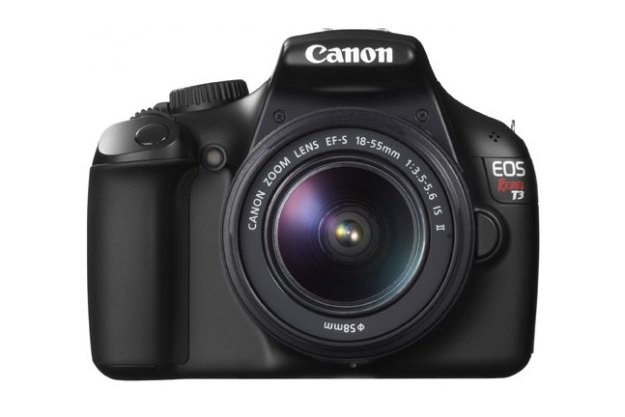 “The Canon EOS Rebel T3 is a mixed bag. In cameras, you really do get what you pay for. The T3 doesn’t deliver what it should, even for the low price.”

We almost felt like Sookie Stackhouse in HBO’s True Blood. We closed our eyes and the next thing we knew, a year was gone. In this case we didn’t travel in “fairy space time,” but blinked and Canon sent out a replacement for the XS and XSi DSLRs. The company sprinkled some fairy dust on those older cameras by adding 720p HD video. Were we enchanted by this new DSLR? You won’t have to watch 12 episodes to find out.

Pick up the older 10-megapixel XS, and you’ll have trouble telling it from the T3 other than the model number on the front. The rear is another story, as there’s a slightly larger LCD screen, a button for Live View and a red dot next to it indicating “videos taken here” on the T3. Although there are a few other changes we’ll discuss, the new Rebel looks like your basic Canon DSLR. If you’ve looked at or owned one over the past few years, you won’t be shocked by it. Yet there is a bit of style, as it’s not only available in black but with brown, red or metallic gray bodies; our review sample was black. The camera feels rather light, and you’ll have no problem telling this one from a Nikon D7000, but that excellent DSLR costs twice as much. The T3 body measures 5.1 x 3.9 x 3.1 (width x height x depth) and weighs 17.4 ounces.

The front of the T3 features a red-eye reduction lamp that also doubles at the self-timer lamp, a mono mic, lens release button and, of course, the Canon EF lens mount (it accepts EF-S glass). The kit is supplied with a starter 18-55mm Image Stabilized lens. It’s OK, but you’re much better off spending extra for a higher-quality one. The grip is also here, and it’s quite comfortable with a nicely-placed, angled shutter button with a nearby scroll wheel for making menu adjustments.

The top has an auto pop-up flash, hot shoe, mode dial, power switch and a button to manually pop the flash open. The flash does double-duty as an AF Assist lamp, so you have to open it for best results. This is a weird setup, and we’re not fans of this system. It almost seems like a lightning storm is going off as you press the shutter half-way. And even if you don’t want the flash to fire, it’ll go off. The 14-megapixel Nikon D3100 –which is slightly more expensive — has an AF Assist lamp on the front. On a more positive note, the mode dial has almost everything you’d want within easy reach starting with Auto, PASM, some popular scene options and movie. The main drawback is the fact the dial doesn’t turn 360 degrees, so if you want to go from movie (the last on one end) to manual you have to turn 12 clicks. Is this the end of the world? Not really, but Canon should’ve made this entry-level DSLR as friendly as possible.

The rear has the most external changes vis a vis the XS, but newcomers will have little trouble identifying the various buttons as they have large labels. Here you’ll find the viewfinder with diopter control, a 95-percent field of view and .8x magnification, specs you’ll typically find with low-priced DSLRs (the D3100 is similar). Below the viewfinder is a basic, fixed-position, 2.7-inch LCD rated a so-so 230K pixels. Is it terrible? No, but you do get what you pay for. The D3100 has a slightly larger 3-inch display also rated 230K.

To the right of the screen are the usual 2011 controls: exposure compensation/delete, Live View/record with the red dot next to it and Q for Quick Menu. Nearby is a speaker and the four-way controller with center set button. Here you have access to AF type, white balance, burst/self-timer and ISO (range is 100 to 6400). Other keys include display, playback and menu. On the top right are AE/FE Lock and AF point selection. In playback, these will magnify or reduce your images.

On the left side is a compartment with USB and mini HDMI out, as well as an input for a remote control. The bottom of the made-in-Taiwan T3 has a compartment for the lithium-ion battery and a slot for SD cards (it accepts SDXC and Eye-Fi media).

The carton has everything you need to get started other than a memory card. You get the camera, kit lens, body cap, neck strap and USB cable. The battery is rated a very good 800 shots per CIPA and you also get a plug-in charger. Canon supplies a multi-language basic instruction manual (84 pages in English) and two CD-ROMs. One has the full owner’s manual as a PDFm and the other is Canon’s software suite for handling images and developing RAW files.

After charging the battery and popping in a 4GB Class 6 SDHC card, it was time to take some photos and videos.

As time goes by in Digital Camera Land, resolution increases, just like the Federal deficit. The older XS was a 10-megapixel DSLR without HD video capability. The 2011 Rebel T3 features a 12.2-megapixel CMOS chip and takes 720p HD videos at 30 fps. We set the T3 to maximum resolution (4272 x 2848) and best compression in still mode. This was done because as a low-priced DSLR, it doesn’t have the heavy-duty firepower of more expensive models. Although it grabs three frames per second, it only shoots five RAW images or one RAW+JPEG before taking a breather. On a more positive note, you can breeze through 830 JPEGs in continuous mode. Since we wanted to shoot some little-kid relatives swimming, JPEG burst was the setting for that activity. Besides summer pool time, we shot flowers, foliage and other scenery. We also took the camera with us on a visit to Times Square and ran into a Transformer robot — only in New York! We also had some fun with July 4 fireworks display. When done, content was downloaded to a PC for review, prints were made and we checked out the 720p videos on a 50-inch plasma via HDMI.

Before the envelope is opened, we’ll state the Rebel T3 is very simple to operate, and anyone making the move from a point-and-shoot will have few problems making the transition. Unlike most aim-and-forget cameras, the T3 focuses quickly, has speedy shot-to-shot times and the 3fps burst mode is fine for fast-moving subjects (i.e. kids swimming). Battery life is outstanding.

We did have some button layout issues, however. When shooting the fireworks, naturally it was dark and we had trouble feeling for the record button, which is in between exposure compensation and Quick menu. A separate round record button would be much appreciated. A few more scene modes would help as well. One would imagine a camera designed for beginners would have a fireworks mode. Well, the T3 doesn’t, and it only has five basic ones. Guess they want newbies to learn how to capture images quickly. To be fair, the Nikon D3100 doesn’t have a fireworks setting either.

We took a wide variety of images and videos, starting in auto then moving through the mode dial. For the most part, shots and movies taken in daylight were quite good. Colors were on the money, and we had a lot of fun playing with exposure compensation while shooting sun reflections on skyscrapers. Like any DSLR, the T3 has plenty of tweaks to fine-tune your images. We shot in the default Standard Picture Styles, but you can punch this up, if that’s your taste.

We were disappointed in the overall sharpness of the T3, especially for close-ups. We attribute this to the kit lens and to fact we shot many flowers with the flash closed because we wanted the available light ambiance and disabled the AF Assist. When the flash was up, things were much sharper, but of course, you had the extra light.

Canon cameras typically capture warm indoor shots under tungsten lights — without the flash, of course — and the T3 is no exception. When indoors, shift to program, change the white balance and your results will be much more accurate.

The Rebel has an ISO range of 100 to 6400. Our test subject held up well to ISO 800 then color accuracy began to fade. Of course, there was heavy digital noise at 3200 and 6400, but surprisingly you could probably get away with a 3×5 print or display your images on the web. It’s the rare P&S that could deliver these results. Still we’d keep at ISO 800 or less for best results.

Although the T3 only takes 720p clips at 30fps, the results were surprisingly good even on a 50-inch screen. And the mono sound was quite robust. Focusing in movie mode is good as the camera locked on target fairly well. It’s no camcorder but for short clips, it’s a fun tool.

The Canon EOS Rebel T3 is a mixed bag. We have some difficulty recommending it wholeheartedly — newbies should closely look at the $650, 14-megapixel Nikon D3100 instead if they’re moving up to an entry-level DSLR even though it costs more. It’s a better camera. As an end note to the weekend, we took a bunch of shots with an older 16-megapixel, 10fps AVCHD Sony SLT-A55, a $799 DSLR with an 18-55mm lens. That one was so much superior, it was comical. You’re better off waiting for the new Sony A35 or picking up the older A33 for $699 with a lens. In cameras, you really do get what you pay for. The T3 doesn’t deliver what it should, even for $549.