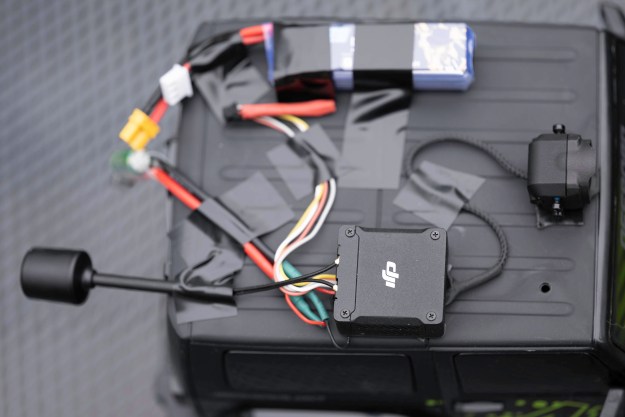 “The DJI O3 Air Unit is a versatile image transmission and capture system for FPV hobbyists.”

While I have many years of experience flying drones, I have barely dabbled my toes in the waters of more advanced and technical first-person view (FPV) vehicles. This is the perspective with which I reviewed the DJI O3 Air Unit, which is a camera and image transmission system designed for hobbyists who don’t mind getting their hands dirty with screwdrivers and soldering tools.

Testing the O3 Air Unit was quite an eye-opening experience into the challenging, yet highly rewarding world of building and operating FPV drones and other RC devices. It required a lot of trial, error, and general troubleshooting — all in search of the answer as to whether or not the O3 Air unit is something reserved for the dedicated hobbyist, or if more casual drone and RC enthusiasts might do well to consider taking advantage of the exciting possibilities it represents.

The O3 Air unit is a very simple, bare-bones system. It features a camera, an antennae, and a transmission unit — and these three components are connected via cables. The core unit of the device features a connector designed to be plugged into a compatible flight controller, as well as USB-C and microSD card ports, plus a pairing button.

The construction of the DJI O3 Air Unit is extremely robust and high-quality, though it isn’t waterproof. The compact, high-performance nature of the device is such that it needs every bit of airflow it can get for cooling.

Getting the O3 Air Unit up and running was a journey, though none of my difficulties were the fault of the device itself. Rather, my trials and tribulations were the result of early firmware and my own inexperience with wiring and with hobbyist remote-controlled (RC) drones.

First off, I needed to power the device. This would be most easily done by simply plugging the O3 Air Unit into a compatible flight controller. However, I lack such a flight controller, and my primary interest in the O3 Air Unit is as a device with which to experience ground-based RC vehicles. With this in mind, and after a lot of research, I eventually ordered a 500mAh LiPo battery, a charger, and an adapter to go between the battery and the charger. I also purchased a pigtail connector to connect the battery directly to the O3 Air Unit.

Hooking up the battery connectors was the only tricky and technical aspect of this project, as it involved snipping the power and ground wires on the O3 Air Unit and soldering them to the pigtail connectors.

With this complete, I was able to successfully power on the O3 Air unit for the first time. I want to give a big shout-out here to GetFPV.com for their excellent customer service, which helped me figure out what parts I needed to order.

If you plan to follow a similar route as I did with the O3 air unit, I recommend buying a high-quality battery charger since you don’t want to mess around with LiPo batteries. Also, if you’re building a low-speed vehicle or if you plan to mount it in a location where the air unit won’t be exposed to a significant amount of air circulation, you should also plan to include some kind of cooling fan.

After I was able to power the O3 Air Unit, I still had to get it paired to my DJI Goggles 2 and controller. I really struggled with this, but after a brief back-and-forth with DJI, we narrowed the problem down to prelaunch firmware, and after a quick update for the controller, headset, and air unit, I had everything up and running. I quickly strapped the O3 Air Unit to an RC race car with packaging tape and took it for a spin around the garage.

With this successful test run, I upgraded my setup to an RC monster truck, using double-sided mounting tape and electrical tape to secure the cab of the truck. The O3 Air Unit worked great in this setup, though unfortunately, the monster truck was not as off-road capable as advertised.

Next, I put the O3 Air Unit to its more traditional use as a drone camera, taped to the top of my DJI FPV drone. I worried that the tape might not be strong enough, but fortunately, it turned out to be rock solid. Both the drone and air unit performed admirably, though in the future, I plan to mount the Air Unit at a better angle on the DJI FPV drone so that the propellers are excluded from the view.

With the capability of recording 4K video at 60 frames per second (fps) and 2.7K video at 120 fps, the O3 air unit is quite powerful as a videography tool. With RockSteady image stabilization similar to what you’d find in the DJI Action 3, the O3 Air Unit could serve as an adequate replacement for the action cameras typically used by FPV drone pilots. This is potentially huge, as it means serious weight savings and, thus, a performance boost in situations where every gram matters.

It’s a major improvement over the original DJI Air Unit in terms of image quality and a big improvement over the camera integrated into the DJI FPV drone. It’s roughly on par with the DJI Avata camera, though in my next setup using this camera, I intend to add a bit of foam or rubber between the O3 Air Unit camera module and the RC vehicle to help dampen the vibrations and achieve smoother footage.

I never had any cause to complain about the transmission quality or strength of the O3 Air Unit. Using the DJI Goggles 2 with it, I never experienced any noticeable lag or loss of signal, though it should be noted that I never really pushed the limits of its range. I used it as I would FPV drones in the real world, where I am always careful to stay within visual line of sight. I did, however, drive it with RC cars with a solid wall between myself and the car and didn’t experience any loss or degradation in the signal.

A really impressive aspect of the O3 Air Unit is its 20GB of onboard storage.

The one significant problem I ran into was overheating, as I have already alluded to. To be clear, this is a system designed to be used with drones traveling at a high rate of speed through the air. However, the rate at which it overheats is somewhat alarming when it’s not actively being cooled. It made the O3 Air Unit rather difficult to update, and I ended up running my NiteCore BlowerBaby air-cleaning device over the O3 Air Unit during the troubleshooting and setup process. When flying it on a drone, this isn’t an issue, and there is an automatic shutoff that occurs if the device gets too hot.

A really impressive aspect of the O3 Air Unit is its 20GB of onboard storage. This may be the most onboard storage I’ve personally encountered on a camera of any description, and it can be a real lifesaver to have this option as a backup to a microSD card.

The DJI O3 Air Unit is available now and retails for $230, which includes the camera module, transmission module, antennae, and 3-in-1 cable. This is actually quite an attractive price point, considering its capabilities, though it’s important to note that you will also need a headset such as the DJI Goggles 2, which retail for $650.

If you’re starting from scratch, you also need to consider the cost of whatever you’re going to attach the O3 Air Unit to. The battery, adapters, and charger I purchased cost me $102 total, and that represents the bare minimum to get the O3 Air Unit up and running. I spent an additional $30 on a cheap RC monster truck, but after being disappointed by the lackluster performance of this bargain bin truck, I would recommend spending at least twice that to get something with good power and shock absorbers.

If you opt for a drone instead, as is more the intent of the DJI O3 Air Unit, expect to spend several hundred dollars at least on the drone itself. All told, a complete FPV setup built around the O3 Air Unit will run around $1,000 at a minimum. That puts you in the ballpark of the DJI Avata, which I’d recommend to beginners just looking to get into FPV drone flight.

A versatile system for FPV hobbyists

The DJI O3 Air Unit is a clear winner when it comes to image transmission for FPV control of drones, cars, and RC vehicles of various descriptions. While it is certainly aimed at those of a hobbyist mindset with a certain degree of technical knowledge, the learning curve isn’t so great as to severely limit its accessibility.

It’s practically a foregone conclusion that the O3 Air Unit will become the de facto camera of choice for hardcore FPV drone pilots. It’s a camera that tickles the imagination and lends itself to creative projects. It’s reliable, powerful, and delivers excellent image quality that’s good enough to replace a standalone action camera.

Topics
The best webcams for 2022
The DJI Osmo Action 3 looks nothing like the Action 2
GoPro Hero 11 Black leak suggests a moderate upgrade
Watch this Mavic 3 drone soar above the world’s highest mountain
Netflix sheds light on its ‘approved cameras’ for filmmakers
Best Prime Day Drone Deals 2022: What to expect this week
How to remove the background from an image
Instagram boss says to expect even more video content
6 awesome Earth images captured from the ISS in July
This GoPro Hero 10 bundle is $100 off at Best Buy today
The best iPhone tripods for 2022
How to watch DJI unveil an all-new drone today
DJI Avata vs. DJI FPV: Which first-person drone is best for you?