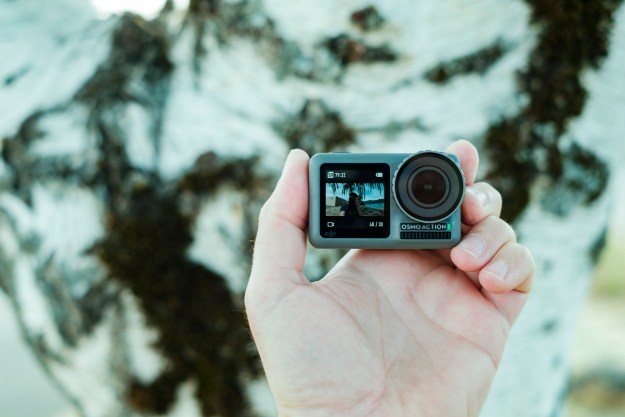 DJI’s rumored Osmo Action is finally here, and while it doesn’t look radically different from other action cameras, it does bring a couple genuinely innovative features to what is otherwise a very imitative design. The front LCD screen lets you check framing even if the main, rear screen is obscured, a common situation when mounting the camera to a bike frame, vehicle, or just a selfie stick. The replaceable lens cover lets you easily swap in polarizing or neutral density filters. HDR video adds 3 stops of dynamic range.

But at its core, the Osmo Action is a straightforward action camera — and GoPro lookalike. To the untrained eye, the drab gray exterior could easily be mistaken for a Hero7. The user interface is built around a touchscreen and gesture commands that are a near facsimile of GoPro’s. Naturally, it also uses the standard GoPro mount, making it compatible with a wide range of accessories.

DJI didn’t set out to reinvent the wheel. They borrowed what could be borrowed and innovated where there was room for improvement. The result is a camera that doesn’t stand out from the pack, but brings serious value to the table for just $349 — $50 less than the GoPro Hero7 Black.

Have you used a GoPro? This will feel familiar

The Osmo Action is a palm-sized rectangular box that is waterproof down to 36 feet without a case. A circular lens housing protrudes from one corner on the front, next to which lives a 1.4-inch LCD screen with a 1:1 aspect ratio. The back of the camera is dominated by a large, 2.25-inch touchscreen with a 16:9 ratio. That main screen is wider than what you get with a GoPro (and looks considerably better because of it), while the camera itself is only negligibly wider (and ever so slightly shorter) than the GoPro Hero7 series.

It’s the front screen that really sets the Osmo Action apart from other action cameras. The nonstandard aspect ratio is a bit weird but allows you to preview your shot either in letterboxed fashion (with “black bars” on the top and bottom) or in full screen mode with the sides of the video frame cropped off. The screen quality isn’t anything special — you’ll want to use the rear screen whenever possible — but it’s enough to make sure you’ve got the framing you want.

The touch interface (which works only on the rear screen) also works very well, and here DJI has done a good job of imitating what GoPro is best at. The user interface will immediately feel familiar to anyone who has used a GoPro Hero5 or newer. Swipe right to access the library, down to access the control center, left to access settings and exposure options, and up to reveal resolution and frame rate settings. The touch inputs all feel responsive, though the icons weren’t always intuitive. There’s a learning curve, but it’s not too steep.

You’ll find three hardware buttons on the device. Up top is the power and record buttons, and on the side is the Quick Switch button. The first two are self-explanatory, but Quick Switch has two different functions. Press it to bring up a menu of shooting modes including Video, HDR Video, Time Lapse, and Photo, or hold it to activate the front screen.

The camera can also be controlled remotely through the DJI Mimo app. We tested the app in beta and, at least for now, it’s one area where DJI falls behind GoPro. Mimo lacks refinements in how settings are displayed and navigated, and some information icons are too small. In the camera, electronic image stabilization is referred to by the RockSteady name; but in the app, it’s simply labeled EIS. This is confusing for novice users who may not understand the terminology. Oddly, there’s no way to preview the footage right side up if you’re holding your phone in portrait orientation — the video preview is locked to landscape.

On the plus side, the app was responsive, with minimal lag in the live view feed.

The screw-on lens filters are a nice addition. The default clear filter can be removed by hand and replaced with an ND filter in a matter of seconds. This is a far less labor-intensive approach than GoPro’s finicky bayonet-mount lens cover on the Hero5 and newer cameras.

DJI provided us with four different neutral density (ND) filters for this review, offering 2, 3, 4, and 5 stops of light reduction. It informed us that polarizing and underwater filters will also be available, and that the screw mount itself is not proprietary. Third-party manufacturers should have no trouble churning out compatible filters, and many may already exist. It is, however, a different filter mount than any used on other DJI products. Filters for your Mavic drone or Osmo gimbal camera won’t be compatible.

The Osmo Action can record 4K video at up to 60 frames per second, which is par for the course these days. Full HD video is available up to 240 fps for 8x slow motion, and the camera can even shoot HDR (high dynamic range) video at 4K/30. The most important feature, however, is the RockSteady electronic image stabilization (which, as it happens, is not compatible with HDR mode).

Like GoPro’s HyperSmooth, RockSteady takes the shakiest camera motion and turns it into buttery smooth footage. In our limited time with the camera so far, we weren’t able to determine if RockSteady is truly as good as HyperSmooth, but it provided gimbal-like stabilization for handheld shots and maintained a perfectly flat horizon when panning.

The small sensors in action cameras are prone to blowing out highlights and crushing shadows, but shooting in the optional D-Cinelike color profile, we found the Osmo Action captured a decent amount of dynamic range. D-Cinelike looks flat coming out of the camera and requires some color correction to look “normal” again, so it’s not recommended for beginners, but if you’re looking to get the most out of your footage, you should turn it on and leave it on.

The lens produces an insane amount of distortion, to put it mildly, which can fortunately be corrected in-camera by turning on Dewarp — we recommend doing this. Dewarp does crop the footage, but the lens is so wide to begin with that it shouldn’t matter.

RockSteady stabilization also causes a crop; with it and Dewarp active, the frame is dramatically “zoomed in” compared to the uncorrected, non-stabilized view. Again, turning these features on is probably worth it — but that cropping comes with a second cost beyond the loss of angle of view. It makes the footage softer. That “4K” resolution isn’t really 4K anymore. Viewed at 100%, details are blurry, while heavy compression causes the shadows to block up.

To be fair, these are the same challenges every action camera faces, and when footage is played back on a phone or other small screen, you won’t notice the lack of detail. Just don’t expect a flawless image if you view your antics on a 65-inch 4K television.

The $349 Osmo Action is a great first attempt for DJI, combining tried-and-true action cam design and functionality with a few innovative features that are useful. Is it a huge step forward over the GoPro Hero7 Black? For most people, not likely. Image quality remains merely acceptable, and stabilization performance is certainly very good, but likely not any better than what we’ve already seen with HyperSmooth.

GoPro maintains a slight edge in the UI department, and a much more noticeable edge with its mobile app. GoPro has put a lot of effort into its Plus membership program, which provides customers with added benefits like unlimited cloud storage and discounts on accessories.

Where the Osmo Action stands out is with its wide-aspect rear monitor — which looks surprisingly better than the Hero7’s — and its easy-to-use screw-on filters. The front screen, while not something everyone will need often, also helps differentiate this from the crowd of otherwise similar action cameras. Overall, this is a very capable action camera. We only wish the Mimo app was better.

DJI may be prepping launch of Cinewhoop-style drone