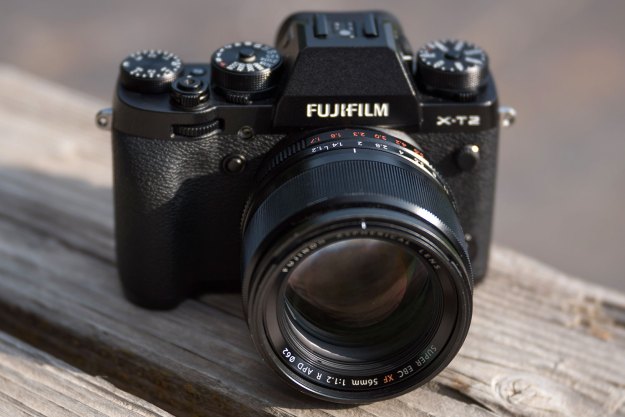 Camera lenses are always getting better, but the basic principles of how they’re designed don’t change very often. Earlier this year, Sony launched the 100mm f/2.8 STF GM OSS lens, which introduced an optical apodization element into the mix. It’s not the first lens to do so, although the feature is still very rare. As such, we take an in-depth look at another lens with an apodization filter that’s been on the market for a few years now, in our long-awaited Fujifilm XF 56mm F1.2 R APD review.

Incomprehensible nomenclature and a special design aren’t the only things the Fujifilm and Sony lenses share, as both also feature autofocus, the only apodization-filter-equipped lenses to do so (there’s a caveat that we’ll get to later). But for Fujifilm shooters, the big question is whether the APD version offers a significant improvement over the standard (and slightly less incomprehensibly named) XF 56mm F1.2 R. Other than the apodization filter, the two Fujifilm lenses are identical, with the same all-metal body and optical construction of 11 elements in eight groups. To find out what makes the APD version so apparently special, let’s take a look at how it works.

What is an APD filter, and will you even notice it?

Apodization (APD) filters aren’t limited to photography and are often used in telescopes and even outside of optics altogether in other types of signal processing, including digital audio. In all applications, the filter is used as a way to attenuate specific areas of a signal to smooth out inconsistencies.

As implemented in photographic lenses, an APD filter is basically a radial neutral density gradient filter positioned just in front of the iris (aperture). The filter is clear in the center and denser toward the edges, allowing in-focus light to remain sharp while smoothing out the brightness out-of-focus circles of confusion (you know, those blurry bokeh discs that everyone is in love with).

Jargon aside, the effect is a softer-looking background blur that doesn’t sacrifice sharpness where it counts, which Fujifilm will tell you leads to portraits that exhibit a “three-dimensional feel.” Be that as it may, the real-world difference between the XF 56mm F1.2 R APD and its non-APD sibling is usually quite subtle, but it does pay off in particular instances.

The one situation where the APD effect is immediately noticeable is when you have point light sources, such as twinkle lights, traffic lights, or multiple points of sunlight peeking through the foliage in the background. Here, the smoother blur circles produced by the APD lens can easily be seen, and we have to admit, we do prefer the look over the standard version.

Each point of out-of-focus light falls pleasantly away into oblivion, compared to the more distracting bokeh of the regular lens. In this specific case, backgrounds are less busy thanks to the APD filter, allowing your eye to rest more comfortably on the subject.

While this same effect is technically taking place in every wide-aperture photo, in the vast majority of normal shooting scenarios it simply doesn’t make a very perceptible difference. You also really should be looking at large prints if you want to appreciate what the APD filter is doing; if you’re just posting a photo to Instagram, you simply won’t be able to tell what all the fuss is about (unless you stuff the background with twinkle lights).

So, yes, the APD effect is noticeable, but only for specific cases or when you know what to look for. Photographers who have used both lenses (or simply seen enough comparison photos) can pride themselves in being able to identify which one was used on a given image, but most people would only be aware of the difference when seeing a side-by-side comparison — and perhaps not even then.

Is there a downside?

Several, in fact. If there weren’t any downsides, it would be easy enough to just throw an APD filter into every lens. Even if you didn’t always notice the effect, having it would be better than not, right? It turns out, though, that there’s a reason APD filters are as rare as they are in the world of photography.

There are two primary disadvantages to adding apodization to a lens. First, it simply darkens the image. With the XF 56mm APD wide open at f/1.2, the effective aperture (in terms of light transmission) is f/1.7, for a loss of about one stop of light. (For comparison, the Sony 100mm f/2.8 STF is only an f/5.6 lens in terms of transmission, for a loss of two stops.)

As the lens is stopped down, the difference between measured and effective aperture decreases. Beyond f/5.6, the APD filter no longer has an effect and both versions of the lens feature the same light transmission. Fujifilm indicates the effective aperture value on the aperture ring in a row of red f-numbers lying just below the standard f-stops in white.

Fortunately, you don’t need to really think about this or adjust exposure compensation to get a proper exposure; everything still works like normal. It’s just that in low light situations, the APD lens will be less viable than the standard version.

If you’re just posting a photo to Instagram, you simply won’t be able to tell what all the fuss is about.

Second, the APD filter makes phase-detection autofocus impossible. Prior to mirrorless cameras, the few APD lenses that existed were, in fact, manual-focus only, but thanks to on-sensor focusing, the XF 56mm F1.2 R APD can use contrast-detection autofocus. Therefore, it is not as fast as its non-APD compatriot, which makes use of phase-detection on supported camera bodies like the Fujifilm X-T20, especially in low-light settings.

In our experience, we also found it to be particularly horrible in continuous autofocus mode, making this a poor choice for moving subjects or video.

(Interestingly, despite the apparently darker APD filter, Sony doesn’t have this issue with the 100mm f/2.8 STF, which the company says works with both contrast and phase-detection autofocus on supported bodies, like the new Sony A9.)

Lastly, Fujifilm’s APD filter adds significant cost to the lens, which comes in at a $500 premium over the standard version. That said, with a final price of $1,499, it is still competitive against many lenses in the same class, including the Nikon 85mm f/1.4G and Panasonic Leica 42.5mm f/1.2, which both hover around $1,600 (and don’t boast APD filters). For a comparison with another APD lens, the aforementioned Sony 100mm F/2.8 STF — while a totally different angle of view and aperture — is also $1,499.

Regardless of your feelings on the APD filter, it’s important to remember that the base 56mm F1.2 R is already a fantastic lens, so the APD version certainly isn’t any worse. This is definitely a lens that you’ll want to shoot at f/1.2 as often as you can, as that’s when the APD effect is strongest. Fortunately, it is sharp enough to be completely usable wide open.

The focal length — equivalent to 85mm on a full-frame camera — provides flattering compression and a good working distance between subject and photographer. There is also a very nice roll-off between focused and defocused areas of the image, although the standard lens was already good at this, too.

Basically, the decision to buy this lens comes down to your own subjective opinion. Even when the APD effect is clear, it is not guaranteed that everyone will prefer it over the look of the normal lens. And much of the time, the effect may not even be perceived.

What will always be readily apparent, however, is the slower autofocus performance. Chances are, this will affect your ability to capture a great photo much more than whether or not you’ve got silky smooth bokeh. Likewise, having to bump your ISO up a stop or shoot at half the shutter speed will have an adverse effect on image quality when working in lower light. So while we do feel the APD version has an edge in some situations, it could just as easily lead to worse performance in others.

Fujifilm provides a one-year warranty on all XF lenses.

As a tech news outlet, we always love interesting and unique products, and the Fujifilm XF 56mm F1.2 R APD is certainly that. As photographers, however — particularly as budget-conscious ones — we have to weigh our love for the tech with the practicality of owning and using it in the real world. Here, it seems hard to justify spending 50-percent more for a lens that only provides a noticeable improvement maybe 10 percent of the time — and even then, the “improvement” is based entirely on one’s subjective interpretation.

Clearly, Fujifilm’s goal with this lens was to offer X-series photographers something special; something that, at the time, no other system had. Is it a special lens? No doubt. Is it practical? That’s not as easy to answer, but for most people, we’d say no. We absolutely love that Fujifilm built this lens, but we are also very thankful that the original version is sticking around.

There is a very obvious one: the XF 56mm F1.2 R (non-APD). It’s a beautiful lens that only rarely seems to lose out to its more expensive peer, while offering faster autofocus and better low-light performance. And at just $999, it is surprisingly affordable.

Like most Fujifilm XF lenses, the 56mm is built to last. Whether you opt for the APD or standard version, this lens is an investment that you should be able to hang on to and use for a long time to come.

For most people, we would say no. But don’t get us wrong: This is undeniably an excellent lens, it just so happens that the standard version is equally excellent — objectively better in some ways, subjectively worse in others — and more affordable. If you desire a truly unique portrait lens, then the XF 56mm F1.2 R APD might be worth it to you. For the rest of us, we should buy the cheaper one, and maybe just consider renting the APD version should a special occasion arise.

Fujifilm X-T4 vs. Fujifilm X-Pro3: A difference in form and function