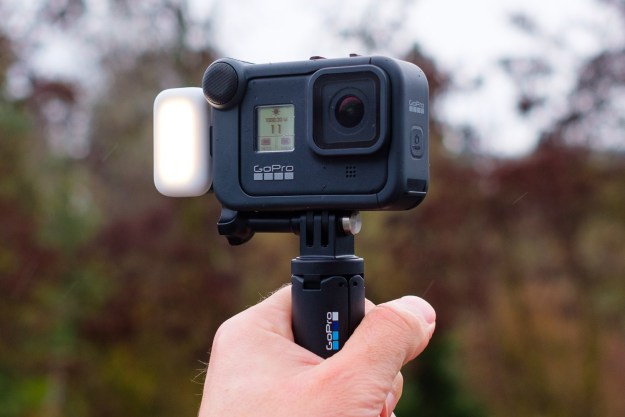 “With its newest accessory, GoPro reaches beyond extreme athletes to celebrate the vlogger.”

The GoPro Hero8 Black is already the best action camera you can buy, but it was never meant to reach its full potential by itself. One of the key features promised at its launch was support for Mods, a collection of three official GoPro accessories that connect to the Hero8 and expand its functionality.

Of these, the $79 Media Mod is by far the most important. Not only does it expand the input/output capabilities of the GoPro and add a miniature shotgun microphone, it’s also the centerpiece to which the Display Mod and Light Mod attach. While we had previously tested the Light Mod on its own for our Hero8 Black review, it wasn’t until we later received a Media Mod that we could use it attached to the camera.

GoPro’s goal with the Media Mod is to cement the Hero8’s position as a capable vlogging camera, breaking the stereotype that GoPros are only used for extreme sports.

Of course, people have been attaching mics and lights to their GoPros for years, but never has there been quite so elegant a solution as the Media Mod. It feels like the most well-thought-out accessory that GoPro has made, and one that should find a home with many vloggers and YouTubers.

Set up and use

The Media Mod is a frame that completely encloses the Hero8. You’ll need to first remove the Hero8’s battery door, then the camera simply slides into the frame and connects to the USB-C port. That single connection powers the Mod’s shotgun microphone as well as USB-C, micro HDMI, and 3.5mm ports on the back of the Mod.

Those exposed ports mean you won’t get GoPro’s legendary waterproofing, but it should be able to handle some inclement weather. It was raining during our test, and we didn’t encounter any problems.

The Mod’s integrated microphone is actually two, one front and one rear. You can select which one you want to use in the camera settings.

The 3.5mm jack lets you attach an external audio source. You can select the type of input from the menu, including powered mic, unpowered mic, or line-in, as well the option to add 20 decibels of gain. Note that attaching an external mic overrides the other audio options.

The Media Mod also adds two cold shoes, one on the top and one on the right. Thankfully, these are standard-size shoes, meaning they also work with non-GoPro accessories. This makes attaching an external microphone, monitor, or light easy — you’re not forced into buying GoPro’s Light and Display Mods if you already own other options.

If you’re looking at the Media Mod solely as a means to boost audio quality with its integrated microphone, you might be disappointed.

Compared to a naked Hero8 Black, sound quality from the Media Mod’s integrated mic appears to be more accurate and less muffled. Objectively, it’s better, and power users will likely prefer it.

However, many people will find the warmer, more processed sound of the Hero8’s built-in mics to be desirable. Voices are slightly deeper, and background noise is reduced relative to what you can hear with the Media Mod, even if it sounds less natural.

Part of the issue is that the Media Mod mic just isn’t very long. When compared to an external Rode VideoMic, the difference in directionality is clear. The VideoMic was less sensitive to off-axis sounds, while the Media Mod mic offered virtually 360 degrees of sensitivity, being only slightly biased to sources in front.

The option to add an external mic is part of what makes the Media Mod a worthwhile accessory, but some GoPro owners would likely prefer a cheaper option that didn’t include an integrated mic.

The Media Mod lays the foundation to build up your Hero8 Black into a powerful production tool, but there are a couple barriers to entry.

First, it works only with the new Hero8 Black. Owners of the Hero7 and older are out of luck.

Second is cost. While $79 for the Media Mod is hardly exorbitant, fully decking your Hero8 out with all three Mods would add $210. That’s more than half the cost of the camera itself.

While some Hero8 owners might be hesitant to drop that kind of cash to modify a camera that will undoubtedly see a replacement this year, GoPro CEO Nick Woodman did imply to Digital Trends that future Hero cameras would remain compatible with the current Mods.

That’s by no means a guarantee, but GoPro at least recognizes that introducing a redesigned, incompatible camera for the next generation would rub customers the wrong way.

The Media Mod is built for a small subset of GoPro Hero8 owners, but that group of people will find it a welcome addition. It solves a lot of the problems inherent to an action camera in a way that makes a minimal sacrifice to handling.

By itself, the Media Mod may not offer the leap in audio quality that some customers would expect. But for those who already own external mics and want the easiest possible solution to attach them to their GoPros, it’s an obvious choice.

No. The Media Mod may not be the be-all-end-all audio solution for you, but given that it also makes attaching an external mic nearly effortless, it’s something you’ll need anyway.

This is hard to say, but we don’t expect the Media Mod will be made obsolete for at least the next generation or two of GoPro cameras. In terms of durability, it feels very well made and should hold up well to wear and tear.

Yes, if you plan to use your Hero8 Black in any situation outside of extreme sports.

Topics
ReelSteady makes GoPro Player ‘reel’ useful for filmmakers
Sound like a pro with Joby’s wireless mic for your phone
GoPro boosts Hero 10 performance with new firmware and Enduro battery
GoPro drops teaser video for Hero10 camera ahead of Thursday’s reveal
How to remove the background from an image
Instagram boss says to expect even more video content
6 awesome Earth images captured from the ISS in July
This GoPro Hero 10 bundle is $100 off at Best Buy today
The best iPhone tripods for 2022
Watch this Mavic 3 drone soar above the world’s highest mountain
How to watch DJI unveil an all-new drone today
DJI Avata vs. DJI FPV: Which first-person drone is best for you?
Astronaut reveals source of ‘intriguing’ bright light on Earth