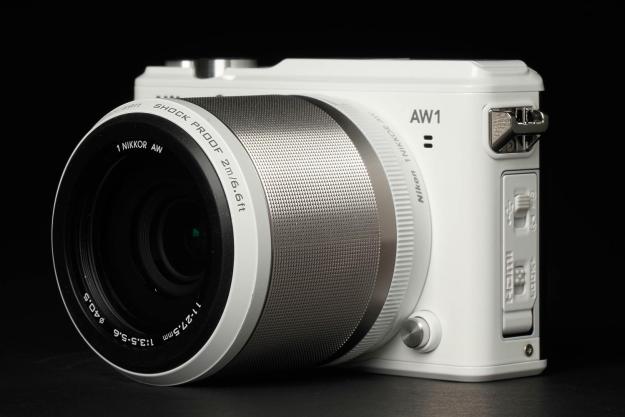 “The Nikon AW1 takes the solid Nikon 1 J3 and makes it waterproof, shockproof, and freezeproof, and throws in GPS capability to boot.”

A few months ago we reviewed Nikon’s solid Nikon 1 J3 mirrorless interchangeable lens camera. Overall we liked the camera, although we did have a few quibbles. With the new AW1, Nikon has taken that same J3 and turned it into a rugged, outdoor camera. With a new body design, the AW1 is waterproof, shockproof, and freezeproof, and Nikon throws in GPS capability to boot

For Nikon purists and camera historians, the AW1 brings back memories of Nikon’s old Nikonos 35mm underwater cameras. The Nikonos were highly popular for underwater photography; in fact, the Nikonos is the successor to the Calypso, a camera developed and used by Jacques Cousteau. Because of its waterproof construction, you can bring the camera – plus a waterproof Nikkor lens – into the pool or ocean without first encasing it in an underwater housing. Unlike rugged point-and-shoots, the AW1 offer better image quality and the flexibility of interchangeable lenses.

For most users, the $800-$1,000 that the camera costs may not be worthwhile if they occasionally participate in rugged activities – just get the J3 if you’re looking for a simple mirrorless camera to step up to. But if you love underwater photography and you do it often, the AW1 is a compelling (albeit niche) product.

The AW1 is waterproof to depths of 49 feet, shockproof up to 6.6 feet, and freezeproof down to 14 degrees Fahrenheit. The AW1 features the Nikon Waterproof 1 Mount, which has a rubber gasket around it to keep water out of the camera. Additional seals and locks around the battery and output compartments ensure that water won’t be a problem. It’s too cold in the Northeast to go swimming, and our editor didn’t OK the budget for a snorkeling trip to the Caribbean, so a dip in an aquarium had to do. After a two-foot dip into 65 gallons of water for a period of time, the camera came out unscathed.

If you have the extra cash to spend and are an avid snorkeler and vacation photographer, this is definitely a camera worth considering.

While it’ll withstand drops, unlike a rugged point-and-shoot camera, you’ll probably be really sad if you dinged up the AW1. That said, it’s nice to know that it can survive falls and come out unscathed.

While the Nikon AW1 is rugged, it has a similar rectangular design as the J3, but it’s less curvy and has sharper corners and edges. Unlike the J3, there’s also a small grip for your fingers on the front, to better hold onto.

As far as tech specs go, the AW1 is identical to the J3. It features the same fantastic 3-inch 921k-dot LCD display along with the 14.2-megapixel CX High-Speed AF CMOS sensor. In keeping with the outdoor theme, Nikon has added GPS capability for geotagging purposes. Like its brethren, the AW1 is also missing a hot shoe and viewfinder.

Like the J3, the AW1 doesn’t have built in vibration reduction, so you’ll want to look for Nikon’s VR lenses for the 1 Series. The kit we tested came with the 1 Nikkor AW 11-27.5mm (non VR) zoom lens ($800). The lens itself is waterproof and shockproof to the same standards as the camera. For $1,000, you get a second rugged lens, the 1 Nikkor AW 10mm f/2.8. As of now, there are only two rugged lenses available, so your options are slim when you’re taking the AW1 underwater. But for the times you don’t need the rugged capabilities, you can use any 1 Nikkor lens that Nikon makes – just remember not to bring non-rugged lenses into the water.

Camera controls are relatively the same as with the J3, with a few made just for the AW1. That means beginners will be happy, but enthusiasts may decry the lack of physical knobs. There’s no mode dial as there is on the J3, so nearly all controls must be done through the camera menus. There are a few more control buttons on the back of the AW1 than the J3, however.

As mentioned, there are features unique to this camera. The AW1 has something Nikon calls Action Control, which lets you make adjustments just by swinging it in the air or underwater – without having to drill through any menus or button pushing. You use it by holding a button and using the camera’s tilt sensor to move an on screen arrow to change modes. This feature makes perfect sense for underwater use or shooting in the cold when bulky gloves make traditional operation difficult.   In its current state we’d say this feature is more of a proof of concept right now, because Nikon doesn’t let the user get as much out of it as they could have. For starters, the feature only works with the camera being held straight. When you’re snorkeling or shooting underwater though, you’re not typically holding the camera this way. Second, you can only use it to change basic shooting modes. For example, you can change from auto to creative control, but once you’re in creative control mode you can’t switch between P and shutter priority, for example. You can also use it to move a slider in playback mode to automatically scroll through images, but that requires holding the button down and keeping the camera tilted for the duration of your scroll. After spending some time with this feature, it doesn’t seem like it adds too much to the camera.

After you dive into the water with the AW1, an Underwater mode auto selects the appropriate settings based on the activity: standard, scuba, or close-up. There’s also Underwater White Balance for correct coloring, and Underwater Distortion Control to correct image distortion caused by the water.

The addition of GPS, and perhaps some of the toughening, means that the AW1 is slightly larger and heavier than the J3, even though Nikon describes the camera as lightweight. The body weighs 11.1 ounces., compared to 7.1 for the J3. But the AW1 feels solid in your hand, and its heft belies its small size. With the lens attached it’s definitely heavier than similar mirrorless cameras in this class, but at the same time it’s still smaller and lighter than a DSLR.

Rather than rehash our J3 review, you can check it out here to get a better idea of the specs and features of the AW1, as well as performance.

The Nikon AW1 comes with a fairly standard selection of included accessories. Inside the box you’ll find the 11-27.5mm lens if you opt for the one-lens kit, EN-EL20 Li-Ion battery, battery charger, camera strap, and a micro USB cable. A disk containing Nikon’s ViewNX2 and Short Movie Creator software are also included.

Operating the AW1 is straightforward and simple. The camera was designed for auto use in mind, despite offering manual control modes. Pop it in auto or programmed auto mode and start snapping away. If you don’t desire to, there’s no need to ever have to delve into any of the more manual camera modes. It’s clear that the Nikon 1 series targets step-up users, but the rugged features of this particular camera makes it appealing to a specific type of user. Because there’s no mode dial like the J3, trying to change settings can take some getting used to.

Since the AW1 is a little bigger than the J3, there is an extended area for a small thumb grip on the back, along with the aforementioned raised, textured lip to wrap your fingers around. This is in contrast to the J3, which we found to be a little bit unbalanced when holding. All in all, shooting with the AW1 felt more natural and balanced than shooting with the J3.

Like the J3, you’ll find that the AW1 has almost no shutter lag. This is due large in part to the impressively fast autofocus. In most lighting situations, it’s almost instantaneous. The face recognition software is also excellent at immediately detecting and homing in on faces. In dim lighting the AF slows slightly, but is never egregiously slow and we never experienced any AF “hunting.”

In bright light, images were bright and had nice contrast, but the kit lens seem to produce soft images that can lack detail. This problem is exacerbated at higher ISO settings when the in-camera noise reduction algorithms remove even more detail to reduce noise. Despite these similar quirks to the J3, the AW1 will produce better images than any rugged point-and-shoot.

When it comes to video, the AW1 shoots in the same formats as the J3. Lack of in-camera VR and a lens without VR means that your videos will probably be shaky, especially if you’re moving around a lot.

The Nikon 1 J3 is a solid ILC, but it didn’t overwhelm us. However, take that same camera and make it waterproof and shockproof, name it the AW1, and it’s hard to not make an overwhelming recommendation. Also, there’s nothing else in the world like it.

A rugged camera that takes very good images comes at a price, however, and the AW1 will set you back $800 for the one-lens kit. If you have the extra cash to spend and are an avid snorkeler and vacation photographer, this is definitely a camera worth considering. But given the high price tag, you may want to spring for an extended warranty. Just in case.