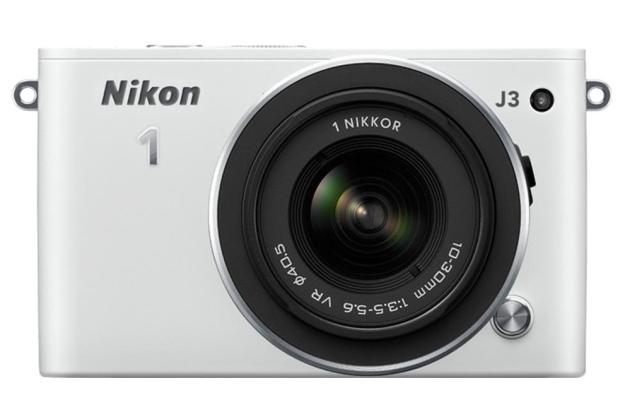 “The Nikon 1 J3 is worth a look for point-and-shoot users looking for an upgrade, but photo enthusiasts and power users will be left wanting more.”

Nikon made a bit of industry noise when it announced it would enter the mirrorless interchangeable lens camera race in 2011. Since then Nikon has unveiled several variants of its Nikon 1 series of compact system cameras. The Nikon 1 J3 represents the third-generation mirrorless interchangeable lens camera in the Nikon 1 J line. The J3 is available in five different colors and carries a MSRP of $600 bundled with a 1 Nikkor 10-30mm lens, which we reviewed (other available configurations include a 10-100mm lens and a 10-30mm and 10-100mm two-lens kit). When we last checked out the J1, we thought Nikon made a good first effort but had more work to do. Let’s see if things have improved.

Right out of the box it’s apparent that the J3 was designed with style in mind. It’s as if the J3 was designed more to be a fashion accessory than a camera. Given the availability in white, red, black, beige and silver, there’s probably a J3 out there to match perfectly with anyone’s wardrobe.

… Nikon seems to have made a concerted effort to appeal more to the auto point and shoot user.

At first glance the J3 doesn’t look drastically different from its J2 and J1 predecessors from a design standpoint. The body of the J3 is still small and compact, but now sports a wonderful 3-inch 921k-dot LCD display – a step up from the 460k of the J1. The downside of having such a large display on a small camera is that there’s little room left for buttons and knobs. Most settings are available only through menus. Overall, the design is almost identical to that of the J1, with just a few minor, but welcome, changes to the controls.
Related

The J3 features a 14.2-megapixel CX High-Speed AF CMOS sensor that’s larger than most point-and-shoots’ but smaller than those found in other ILCs like Samsung’s NX300. This ups the pixel count from the J1 and J2’s 10.1-megapixel sensor. The camera itself does not feature any vibration reduction, so you must be sure to get Nikon’s VR-labeled lenses if you desire this feature. Fortunately, the included lens features Nikon’s VR tech.

Unfortunately, the J3 lacks an external hot shoe and viewfinder, which are features that enthusiasts may miss. This was something we pointed out in our J1 review, but Nikon apparently doesn’t think the user of this camera would need it.

The J3 offers a bunch of standard shooting options along with a few that felt gimmicky; some of these gimmicky modes, such as motion snapshot, are carried over from the J1, so they must have some fans out there (more on these modes later). First, there’s your standard auto mode. As you’d expect, in auto mode the camera figures out what kind of scene you’re trying to capture and picks the best settings. One thing we didn’t like about auto mode was that the software seemed to have a bent towards choosing a high ISO setting, even when the flash was activated.

By moving the control knob to “creative” mode, the options open up for more advanced users. The “F” button on the four-way controller gives the user access to a bunch of advanced and creative sub-modes. These sub-modes are programmed auto, shutter-priority, aperture priority, manual, night landscape, and night portrait, backlighting, easy panorama, soft focus, miniature effect and selective color. Most of those modes are familiar to many shooters, so we’ll cover a few that may not be.

… For point and shoot users looking to upgrade to a camera that will afford them a little bit more creative control.

As its name implies, backlighting mode is useful to compensate for a strong backlight such as a bright window or sky. This is essentially in-camera high dynamic range. Each time you press the shutter, the camera takes two successive images and combines them to preserve detail in the shadows and highlights. Miniature effect mode is one of those gimmicky modes you probably won’t use too often, but it was actually pretty fun to play with. This mode mimics the effect of tilt-shift photography to make it seem like you’re shooting miniature models. It’s best used when shooting down from a high vantage point. If you find yourself up on a roof or looking out a top floor window, you might want to pop the camera into this mode and experiment.

The J3 has a few other “major” shooting modes, most of which felt gimmicky. The first one of these is motion snapshot mode. In this mode the camera takes a bunch of still images and combines them into a video and adds music. We couldn’t really find any situation that warranted using this mode, and we’re not sure why it deserves a spot on the major control dial. You might find it amusing a few times, but there’s really no practical use for this mode.

The second mode is best-moment capture mode. In this mode the camera takes a bunch of burst frame images and decides which one is the “best.” This same thing can be accomplished (although you’d have to select the best image yourself) in standard burst mode, so the benefits of this mode are a little unclear.

For those looking to shoot video, the J3 records in four different modes: 1080/60i, 1080/30p, 720/60p, and 720/30p. Some other included features that will appeal to video shooters are wind noise reduction and subject-tracking autofocus mode.

The J3 is Wi-Fi capable, but instead of having it built-in, it’s an option that requires the purchase of Nikon’s WU-1b Wireless Adapter. Click here to read more about our experience using Nikon’s Wi-Fi implementation.

Operating the J3 is straightforward and simple. This camera was designed for auto use in mind. Pop it in auto or programmed auto mode and start snapping away. If you don’t desire to, there’s no need to ever have to delve into any of the more manual camera modes.

The small design of the camera did lead to some challenges. We found that not having any “grip” area made it a little difficult to find the optimal point for holding the camera. When shooting, it was easier to use a thumb to trigger the shutter as opposed to the more traditional use of the index finger. And while holding the camera with two hands, users with larger hands or stubby fingers may find themselves blocking the flash and AF-assist light. Our original review of the J1 found the camera to be well balanced and easy to hold, so your mileage may vary.

One thing you’ll notice immediately is that the J3 has almost no shutter lag. This is due in large part to the impressively fast autofocus. In most lighting situations, it’s almost instantaneous. The face recognition software is also excellent at immediately detecting and honing in on faces. In dim lighting the AF slows slightly, but is never egregiously slow and we never experienced any AF “hunting.”

In bright light, images were bright and had nice contrast, although the kit lens seems to produce soft images that can lack detail. This problem is exacerbated at higher ISO settings when the in-camera noise reduction algorithms remove even more detail to reduce noise. This isn’t to say that the J3 produces “bad” images, but there are other ILCs on the market that will give you better output.

When it comes to video, the J3 produces QuickTime format (MOV) videos that will be suitable for most users. When shooting at 15 frames per second, the J3 is capable of continuous autofocus but is limited to single point AF when shooting 60 fps videos. A feature that proves useful is the ability to capture stills while capturing video without any interruption to the video shooting process. The wind noise reduction did a nice job of quieting outdoor videos, and since the camera is so quiet you won’t find your videos riddled with all sorts of motor sounds created by the camera.

The ILC segment represents an interesting design challenge for camera manufacturers. They are a step-up from point-and-shoots, but a step-down of DSLR cameras – designing a camera to appeal to both types of users is a difficult task. With the Nikon 1 series, Nikon seems to have made a concerted effort to appeal more to the auto point-and-shoot user.

It’s difficult to recommend the J3 as a secondary camera for DSLR users because they’ll likely find the output and features lacking compared not only to their DSLRs, but also compared to some other ILCs on the market.

On the other hand, the J3 is probably worth a look for point-and-shoot users looking to upgrade to a camera that will afford them a little bit more creative control.

Best GoPro alternative action camera deals for October 2022
Best microSD cards for 2022: top picks for your camera, tablet, or drone
Apple responds to troubling iPhone 14 Pro camera issue
The best webcams for 2022
Vloggers, Nikon has built a new camera just for you
Best 4th of July sales still available — save on TVs, Apple and more
Netflix sheds light on its ‘approved cameras’ for filmmakers
Best Prime Day Drone Deals 2022: What to expect this week
How to remove the background from an image
Instagram boss says to expect even more video content
6 awesome Earth images captured from the ISS in July
This GoPro Hero 10 bundle is $100 off at Best Buy today
The best iPhone tripods for 2022