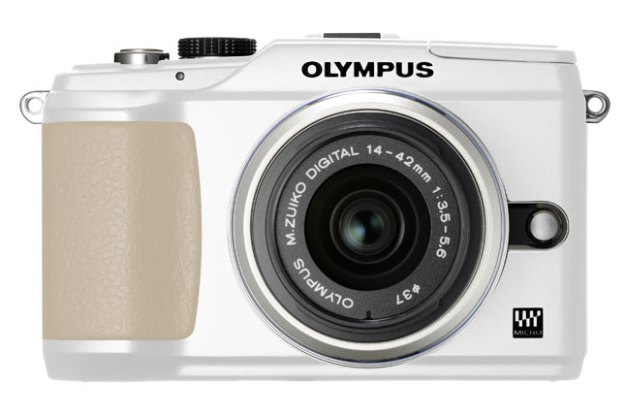 “The E-PL2 lives up to its predecessor’s standards as Olympus continues to improve on its PEN series.”

The latest model in Olympus’ Micro Four Thirds PEN line up continues to appeal to novices ready for a more technical experience. Like the E-PL1, the E-PL2 serves as a stepping stone for photographers who have mastered the pocket point-and-shoot, but are wary of big-body DSLR investments. The E-PL2 begins where its predecessor left off, and still includes the 12.3-megapixel, high-speed Live MOS image sensor found in the more professional Olympus E-30 and E-620 DSLRs. Entry-level shooters will be satisfied with expanded features and sharpened capabilities packed into a similarly stylish and conveniently modified body.

We saw a lot of this design at CES: camera bodies in multiple hues with vintage, retro feels. It’s inarguably cool, and anyone impressed by the massive array of colors Canon and Nikon offer in their point and shoots will be happy that the step up in camera performance doesn’t necessarily eliminate color choice. Olympus offers the E-PL2 in black, silver, red and white.

For more experienced photographers, the specifics behind the E-PL2’s ergonomics might matter more. The E-PL2 measures 115.4 mm x 72.7 mm and offers a 3-inch LCD screen, which is both larger than last year’s 2.7-incher, and has double the resolution (460K versus 230K). It’s slightly slimmer than its predecessor, weighing in at approximately 12 ounces. Just to give you an idea, the Nikon D700 weighs 35 ounces, and the Canon PowerShot S95 weighs six ounces.

Olympus told us that the updated model is better suited for one-handed shooting (some complained the E-PL1 wasn’t particularly easy to hold), and the power button has been altered. On the E-PL1, it was nearly identical to the shutter button, and now has been redesigned to prevent accidentally shutting it off or on by being more discreetly built in. The pop-up flash, hot shoe, mic, and mode dial (which remains unchanged) still sit on top.

The screen upgrade is fairly important, since without a viewfinder, photographers are entirely reliant on the 3-inch LCD to shoot in Manual, or use the menu options at all. Anyone familiar with a DSLR might initially struggle with operating the controls, but it just takes some getting used to.

We tested the camera at multiple ISO levels and compared it to the Nikon D3100’s performance. To be fair, the Nikon is a horse of a different color and costs about $100 more than the E-PL2. That said, it seems important to compare the PEN series to its big brother DSLRs (especially since it’s similarly priced to some).

Before we get too technical, there are some concrete reasons why less experienced photographers will like this camera. Its size and feel fit somewhere between pocket-sized point-and-shoots and DSLRs requiring their own bags. You definitely can’t sling it around your wrist, but it’s still lightweight enough that it’s not a hassle to carry around.

The E-PL2 also features an expanded array of auto controls and built-in filters. These were hot additions at CES this year, but Olympus may have done it best with the E-PL2. It has more scene-select modes to choose from, and the built-in filters vary in quality (the Dramatic Tone was pretty cool, but the Soft Focus wasn’t great). Overall, the filters looked less amateur than many competitors’. Maybe most importantly, the iAuto setting delivers great results: It focuses quickly and has a fast shutter. Also worth mentioning is the impressive color balance in auto mode, largely thanks to the E-PL2’s new processor, it takes photo saturation and noise reduction up a notch.

On to the technicalities. We shot the E-PL2 and the D3100 at their highest ISO capabilities – 6400 and 12800, respectively. While we don’t advocate shooting at this setting (the images are pretty grainy), the E-PL2 held its own against the D3100. The Nikon DSLR’s focus and shutter are inarguably faster than the E-PL2’s, but that’s the nature of the beast when you pit these two against each other, so it’s not terribly important. We tested both all the way down to ISO 200, and while the Olympus performed well and definitely delivered for a camera of its capabilities, the Nikon’s image was more detailed and had more contrast. We want to stress again that these cameras aren’t marketed against each other, the comparison just serves as a point of reference.

We also compared their abilities to shoot outdoors and dual image stabilization functions – and the E-PL2 impressed. The images were just as clear and crisp as the Nikon’s. Zooming into the photos later proved the D3100’s were slightly cleaner, but nothing significant. The only instance the DSLR really bested the Micro Four Thirds device was in low-light settings. In a quick elevator photo shoot, the E-PL2 produced some fairly orange photos, although they were still passable. Nikon’s were definitely more on target with hue and saturation.

There’s a dedicated button for video recording, and we were able to capture high quality video. You can also capture stills while in recording mode, definitely a bonus, and the Live Guide feature lets you edit contrast and tone live before shooting. The camera shoots HD in 720p and while you have the added novelty of shooting in any of the art filters. It can hold its own with other digital camera/camcorder duos, but it’s pretty clear this isn’t the primary function of the E-PL2.

The E-PL2 is an enjoyable and convenient camera. That said, it’s also a difficult purchase to justify. Budding photographers might like this transitional approach, but those planning to expand their repertoire past a Micro Four Thirds and onto fully-equipped DSLRs will have to take the $600 plunge. That’s $100 more than last year’s E-PL1, which we already criticized for being too expensive. The problem is compounded by how fast you may outgrow the PEN series: Users really serious about photography could find themselves ready for something like Nikon’s D700 in no time, which means you’re looking at another pricey investment.

When it comes to Micro Four Thirds cameras, the E-PL2 is a top choice. The image quality and size make it easy to use, and shooters have stunning photos that don’t require computer editing (unless of course, you’re the type that needs to put your pictures through that process). Really, our only issue with it is the pricing, and that doesn’t reflect on the capabilities of the E-PL2.