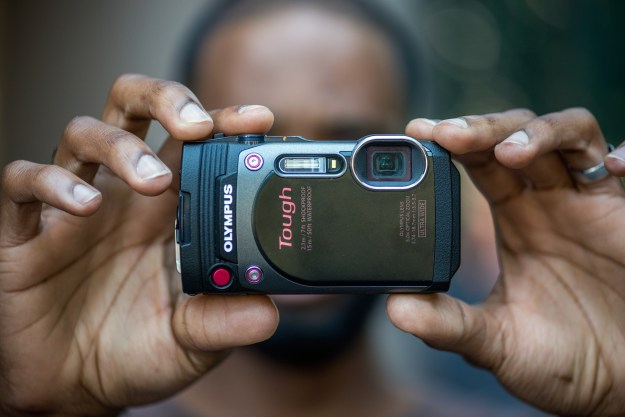 “From oceans to rocky trails, Olympus’ TG-870 survives in elements where most cameras won’t dare venture.”

Smartphones may be our go-to camera for everyday shots, but we wouldn’t take one below 50 feet underwater for selfies; step on it; or drop it onto rocks (OK, with some you might, but those phones are rare). That’s why there’s still demand for rugged point-and-shoot cameras, so called because they can endure the harsh environments and abuse. Whether it’s the outdoorsman who wants to grab snaps and videos while trekking in the wild, or vacationers who just want to toss a camera around a pool, there’s still a valid need for this type of compact camera, even if demand in the overall point-and-shoot sector is declining. Olympus continues to be a major player in this field with its Tough series, and its latest for edition for 2016 is the TG-870 ($280). The camera is a mild evolution from the TG-860 – a camera (now discontinued) we beat the heck out of, but didn’t leave a scratch – and retains the same ruggedness as its predecessor. In the right lighting conditions, the TG-870 is an able performer, but there are some drawbacks.

We’ve played with many Olympus Stylus Tough models over the years, as well as competitors from Panasonic, Pentax/Ricoh, Fujifilm, Nikon, Sony, and others. The thing they all have in common is that they are “compromise” cameras—if you’re looking for a compact with superior image quality and extensive photo adjustments, the TG-870 and others of its kind are not for you. That said, for environments where you wouldn’t dare risk bringing a super expensive camera or smartphone, the TG-870 perfect – to a point, which we’ll explain.

The TG-870 is definitely rugged. It’s dust-, splash-, shock-, freeze- and crush-proof. You can take it down 50 feet underwater, use it in temperatures that hit 14 degrees Fahrenheit, crush it with 220 pound-feet of pressure, and drop it from a height of 7 feet. These are typical specs for most rugged cameras, but it’s an amazing feat of engineering.

In bright light, image quality was quite good with accurate colors and sharpness and detail.

The design of the 16-megapixel TG-870 is more sophisticated than rugged cameras of the past – less toy-like, more of a tank. Available in colors like Gunmetal Metallic (dark gray), Metallic Green, or Pure White, it’s a compact point-and-shoot measuring 4.4 x 2.5 x 1.1 inches and weighing around 8 ounces. There’s no trouble carrying it around all day as it easily fits in a pocket.

Our review unit is dark gray and has exposed bolts on the front to enhance the rugged look (they’re just there for show). On the right-hand grip is a red-dot “Face” button that lets you take selfies when using the tilt-screen LCD. Also on the front are a flash, LED/autofocus illuminator, and the lens. This non-extending glass has a 5x optical zoom with a 35mm range of a very wide 21mm to 105mm. It’s not the brightest lens available with apertures of f/3.5 (wide) to f/5.7 (tele). In other words, you’ll need outdoor light for best results and the flash for indoor subjects. For the types of activities we imagine people would use this camera for, abundant natural light shouldn’t be an issue. (Olympus has the much more expensive TG-4, at $379, with a 4x optical zoom and a bright lens with an f/2.0 aperture. Since it takes RAW files, it’s targeted toward those who have experience with post-editing software.)

Along the slim top are stereo mics, power, and shutter buttons as well as a zoom toggle switch.

The 3-inch LCD screen covers nearly the entire back, with a 920K-dot resolution – an improvement over the 460K-dot resolution in the TG-860, and even the TG-4 and TG-3. The screen also flips up 180-degrees into aforementioned selfie position.

Overall, since the camera is compact, there aren’t a ton of buttons on the back. There’s a small, recessed mode dial with Intelligent Auto, Program AE, Super Macro, Scene (19 options), 13 of Olympus’ cool art filters, Sportcam (turns the camera into an action cam, with quick access to four video settings), Panorama, and Self Portrait. Below this is a four-way controller with center OK button. There’s quick access to Info, flash settings, burst/self-timer. Other buttons include movie (activate video recording), playback, and menu/Wi-Fi.

On the right side is a dual-locking compartment for the battery and SD card. Keeping the electronic innards dry is critical and Olympus makes sure you slide one switch and flip another to make sure it’s sealed. If it’s not properly closed, you’ll see orange warning colors. It’s a simple and effective way to check if the camera is ready for the elements. Interestingly, the Stylus has two tripod mounts, one in the classic spot on the bottom with a second on the left hand side to change orientation.

The TG-870 uses a 1/2.3-inch 16-megapixel backside illuminated (BSI) CMOS chip and the TruePic VII image processor (the processor is also used in the higher-end OM-D series). With such a small sensor and a maximum aperture of f/3.5, however, this camera needs a lot of light for best results – either ambient or using the flash.

We took the camera out to the desert as well as a pool for a dunking, shooting a variety of subjects. Using the camera we encountered noticeable pluses and minuses. We like the straightforward menu system that’s easy to understand. When you go into Scene or Art mode, the screen shows an example of that specific option. It’s very helpful, as is the ability to customize the selfie button on the front and red-dot video button on the back.

The bright Arizona summer sunshine overpowered the LCD, even when brightness level is cranked all the way up. During testing there were times when the screen was difficult to view, forcing us to look at it from different angles. And, although the 3-inch screen may be rated 920K dots, it’s not the sharpest we’ve tested.

When we reviewed shots on the LCD, we were initially disappointed due to the aforementioned screen quality. That thinking changed when we reviewed the stills on a 27-inch monitor – image quality was quite good with accurate colors and sharpness and detail that were a pleasure to see. The camera has built-in lens-shift image stabilization that helps cut down on blur. Now this was in bright sunlight, the expected place an outdoors camera is supposed to be used.

For places where you wouldn’t dare risk bringing a super expensive camera or smartphone, the TG-870 is perfect.

When we shot subjects indoors, without the flash, results weren’t in the same league. The TG-870 has a native ISO range of 125-6,400. Our test subject held its own until 400-800, but then became much more pixelated as the numbers increased with an overall softening and color shifts. This is just a fact of life for small-chip point-and-shoots. We ran into the same problem with the non-rugged Panasonic Lumix ZS60. With enough light from the flash or Mother Nature, the camera will deliver solid photos.

One of the coolest features of the TG-870 – and any other tough camera – is the fact it’s waterproof, making it great for the pool or any other water-related activity that would kill a smartphone or traditional compact. We took the Stylus into a pool and shot a number of still-life images using one of the underwater scene settings. The stills were excellent and sharp. You can dive into deeper water with the camera, but it gets darker the deeper you go, and, as mentioned, low light isn’t the camera’s strong point.

Where we had issues was capturing video. The TG-870 takes 1080/60p Full HD videos. The quality was good but the camera had trouble focusing as we panned around the pool. We had the same issue above the water as the lens had difficulty grabbing focus.

The TG-870 has built-in GPS, a great feature when you’re out in the field. The GPS has been upgraded so it finds your location more quickly than older editions. However, when enabled it’s constantly on, even when you power off the camera, draining the battery. If you don’t need GPS info, turn it off.

As for ruggedness, we tossed the camera into a pool and it didn’t skip a beat. Then, we proceeded to step on it, and dropped it from shoulder height onto rocks and concrete. The camera survived without any problems. We should note that users of older models have complained that the seal of the compartment door isn’t tight enough, and moisture would seep in. We haven’t encountered these issues with the newer models, but if you do decide to take the camera into water, make sure the door is properly closed and locked to seal.

The camera has built-in Wi-Fi, and can pair with a phone or tablet via the Olympus Image Share app (iOS and Android). The app, while basic, is good. Setup is very easy process that involves scanning a QR code that pops onscreen (this is the same process used in other Olympus cameras). A quick scan using the Image Share app on a Samsung Galaxy S5 was painless. Importing images is simple, as is using the phone as a remote shutter. You can add geo-tags to your photos as well.

We should note the supplied strap is kind of cheesy and not adjustable to cinch around your wrist. A higher-quality, tighter-fitting strap should be considered as an add-on so the camera won’t accidentally sink into oblivion or inadvertently get lost on the trail.

The battery is rated 300 shots per CIPA, so buying a spare is a good idea if your adventures take you far from a power outlet.

Olympus offers a one-year warranty for parts and labor.

The Olympus Stylus Tough TG-870 is a very good rugged camera that takes fine stills and can take a beating. Despite the small sensor, the camera is capable of taking sharp, nice-looking photos in most well lit situations. There were some issues with video focusing but overall, it does what it’s designed to do – to survive whatever you put it through, whether it’s a wilderness trek or a summer pool party.