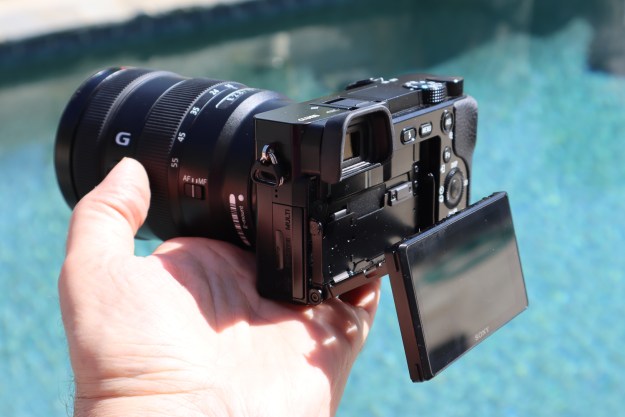 “At nearly half the cost of the flagship A6600, Sony's entry-level A6100 has everything you need.”

As much as we love getting our hands on expensive cameras with the largest sensors and massive amounts of megapixels, entry-level models usually deliver the imaging goods most of us need — without tapping out our credit lines.

The $750 (body only) Sony A6100 is a good example of this kind of affordability. Armed with the same 24-megapixel APS-C sensor and advanced Real-Time autofocus capabilities as the $1,400 Sony A6600, it seems like an obvious choice. While the A6100 does make some trade-offs to hit that lower price, most beginner to advanced amateur photographers will be just fine with them.

Cutting-edge design isn’t an integral part of Sony’s A6000 series. This is a black brick that looks and feels like every other model in the line-up other than the new A6600, which has a deeper grip and more potent battery. Familiarity doesn’t breed contempt as the A6100 is quite functional other than Sony’s usual idiosyncrasies, but it’s certainly not as pretty as the Fujifilm X-T30. The camera measures 4.75 x 2.75 x 2.4 inches and weighs 14 ounces with memory card and battery installed.

The A6100 uses the same E-mount as all Sony mirrorless cameras, both APS-C and full-frame models. That grants access to 54 native lenses from Sony, plus more from third parties like Sigma, Tamron, and Zeiss. Lens selection is a big advantage of Sony thanks to the E-mount being relatively mature, and it offers an easy upgrade path from APS-C to full-frame should you choose to make that move down the road.

We’re please to see the A6100 features a 0.39-inch OLED electronic viewfinder (EVF). It’s not the best in the business, with just 1.44 million dots, but it gives the Sony an edge over the Canon EOS M6 Mark II, which has no built-in EVF. The main LCD monitor has an unremarkable 921,000-pixel resolution, but can tilt a full 180 degrees for selfies.

The control layout is all very straightforward and legible. There’s a dedicated mode dial, dual control dials, and two custom buttons. For novice photographers, that gives the A6100 some room to grow into as they graduate out of auto exposure into manual. The A6100 has a built-in flash — something that was deleted from the A6600 — as well as a standard hot shoe for attaching external flashes.

To repeat our constant complaint about the A6000 series, there is one control that just doesn’t work. The Movie record button is wedged into the right hand edge of the thumb grip, where it’s nearly impossible to reach. Yes, you can reassign this function to one of the custom buttons, but that seems like a big ask for entry-level customers. This is just such an easy fix, it drives us crazy that Sony hasn’t updated it already.

You’ll find USB, HDMI, and microphone ports on the left side of the camera, but notably missing is a headphone jack (something you will find on the more expensive A6600). The battery and memory card share a compartment at the bottom of the camera. The battery is rated for 380 shots, decent for a mirrorless camera, but a far cry from the 810-shot battery life of the A6600.

The Sony A6000 series has featured a 24MP sensors since day one (which was 5 years ago). They’ve been modified and enhanced over the years and the Bionz X processor has been tweaked as well. While it’s a bit strange that Sony hasn’t opted for the 26MP sensor found in the latest Fujifilm cameras, we can’t really argue with that decision — the image quality is still very good, and there is little that the A6100’s target customer would notice about that newer sensor.

What the A6100 delivers is is Sony’s latest, artificial-intelligence-based autofocus systems, Real-Time Tracking and Real-Time Eye AF. We’ve lauded this new technology since its release and it just keeps getting better, and we’re pleased to now see it on an entry-level model. Other companies offer Eye AF, but Sony’s is still the best out there and is the biggest selling point of this camera.

The Hybrid AF system uses 425 phase- and contrast-detection points covering 84% of the sensor with a claimed 0.02-second minimum focus time. We can’t verify that number, but suffice to say, the autofoucs felt very fast.

That’s matched with a continuous shooting speed of 11 frames per second a sizeable image buffer that lets you shoot about 75 JPEG photos in a row. The A6100 will have no trouble keeping up with your kids or pets.

Perhaps the biggest difference between the A6100 and A6600 is that only the latter has in-body image stabilization (IBIS). The two lenses Sony leant us for this review, the 16-55mm f/2.8 and 70-350mm f/4.5-6.3, are both optically stabilized — as are many of Sony’s E-mount lenses. We would love to see IBIS in a camera at this price point, but as neither Canon nor Fujifilm offer it on their competing models, we’re not surprised it’s not in the A6100.

Note that neither of the lenses we tested are the kit lens and are both more expensive than the camera body itself. The 16-55mm is a premium zoom selling for $1,400, while the 70-350mm is $1,000. That put our “entry-level” camera in the $2,000 neighborhood. With any camera, performance and image quality is partly a function of the lens, so our results might be better than what you can expect for the standard 16-50mm f/3.5-5.6 kit lens (bundled with the camera for $850).

Sony’s Real-Time Eye AF worked fabulously with these lenses. It’s trained to recognize both human and animal eyes, but it even worked on statues we photographed in a dimly-lit church. We were shooting the Canon EOS M6 Mark II side-by-side with the Sony, and the A6100 was far better.

Real-Time Tracking also worked very well with runners, bicyclists, and surfers we captured on San Diego beaches. We shot a long burst of a train coming into a station and every frame was in focus. We’ve never used an autofocus system this reliable before; that it’s on a $750 camera is all the more impressive.

But for as good as it is, we still can’t get over Sony’s menu system, which remains as dense and obtuse as ever. We’ve used this interface for years now, so we know the various hacks to make it work, but it’s a shame Sony hasn’t overhauled it. By comparison, the Canon M6 Mark II’s interface was a dream to use; the one area where it outshone the A6100.

The sensor may be the same, but Sony has retuned its processing for more accurate color and pleasing, natural tones. In-camera JPEGs look really good, and of course you can shoot in RAW if you’re comfortable editing your photos in post and want the best possible quality.

The camera has a native ISO range of 100-32,000, but it can be expanded to 51,200. Our tests showed very little noise and digital artifacts at relatively high sensitivities, but we’d recommend keeping it below ISO 6,400 for the best results. This is where full-frame sensors, which gather about twice as much light, show a significant advantage, but the vast majority of photographers won’t be disappointed by the results of the A6100.

As for video, the Alpha A6100 records 4K/30p using the XAVC-S codec with full pixel readout (3,840 x 2,160). You don’t have the advanced 10-bit HDMI output options that you get on the Fujifilm X-T30, but that’s not something most customers in this price range are asking for. More importantly, video is incredibly easy to shoot thanks again to Real-Time Tracking autofocus. However, Real-Time Eye AF is not available in video mode. If you you want it, you’ll need to pony up for the A6600.

For an entry-level mirrorless camera, the A6100 is hard to beat. Image quality, while not a dramatic step forward, has improved thanks to better JPEG processing, and Real-Time Tracking and Eye AF leads the competition. We can’t argue with picking up the $850 kit, but the camera is much better than what the kit lens allows it to be. Even for people looking at the A6600, you may be better off going with the A6100 and putting the money you save toward a higher-end lens. We can almost guarantee you’ll be a happy camper.

Are There Better Alternatives?

Not at this price. The $899 Sony A6400 has a better EVF and more video options, while the $999 A6500 offers built-in 5-axis image stabilization (but lacks Real-Time focusing tech). The 26MP Fujifilm  X-T30 ($899 body only) is another option that delivers really good photos and videos, but its autofocus system, while good, is not at Sony’s level.

Want more options? Take a look at our favorite cameras of 2019.

How Long Will It Last?

Sony is constantly adding new models to the A6000 series, but the A6100 will be around at least two years. It is not weather-sealed like the higher-end A6600, so you’ll want to treat it carefully, but it should give you many years of use.

Should You Buy It?

Yes. This is a relative steal at $750. Unless you’re a professional photographer, you really can’t ask for much more from a camera.