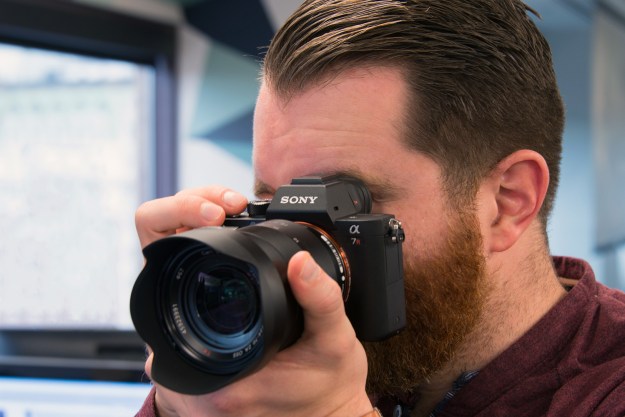 Possibly the most discussed, written about, and argued-over camera in recent memory, the Sony A7R Mark II is causing quite a stir. Sony has been outdoing itself with every new variant of the A7-series, but with the A7R II, it’s gone beyond basic evolutionary upgrades. The mirrorless interchangeable lens camera is packed with cutting-edge parts, as well as a trick or two up its sleeve (hint: Canon users, take note).

Yes, it’s easy to get mesmerized by fancy specs, but the A7R II delivers on quality, too.

While this is our full review of the A7R II ($3,200, body only), we have previously covered the camera considerably, from its unveiling to a hands-on and comparison with the Canon EOS 5DS R, another high-megapixel full-frame interchangeable lens camera. In the press, the A7R II has received a large amount of ink, and deservedly so – it is, technologically, one great camera. The mirrorless, compact body (5 × 3.9 × 2.4 inches without lens, and 22 ounces with battery and card) has a 42.4-megapixel back-illuminated (BI) full-frame sensor – a first for the industry. The camera captures 7,952 × 5,304-pixel stills as well as 4K video in Sony’s XAVC-S format. And with its Fast Hybrid Autofocus technology, the A7R II can autofocus select Canon lenses (using an adaptor), breaking the wall that’s existed between camera brands.

The A7R II has a magnesium-alloy body and is dust- and moisture-resistant. It looks similar to the original 36.4-megapixel A7R and the more recent A7 Mark II (which was the first to add five-axis image stabilization to the A7-series), but there are a few subtle changes in design and layout of controls. On the front is the Sony E-mount, and there are 13 specific full-frame lenses to choose from, as well as third-party E-mount lenses from Sigma, Tamron, etc. With an adapter, you can also use Sony’s full-frame A-mount lenses.

However, as mentioned, the A7R II has the unique ability to not only use Canon lenses, but also to autofocus them (phase detection). To do this you’ll need an adapter from Fotodiox or Metabones. Depending on the lens, it will focus automatically using the A7R II’s autofocus system – one key reason this camera has created so much buzz. As we pointed out in our comparison test, some lenses will not work. But, it opens up the opportunity for Canon lens owners to use a Sony mirrorless camera without having to buy new glass.

Also on the front is an AF Assist lamp to help focus in low light, a remote sensor on the textured grip, and a lens-release button.

The top deck has “4K” and “SteadyShot Inside” decals, reminding you that it can shoot 4K movies (at 30p) and its built-in five-axis image stabilization will steady any lens you attach. These are another two improvements over the original 36.4-megapixel A7R, which grabbed Full HD AVCHD videos and did not have in-body IS. Also on the top is the “hump” for the electronic viewfinder, with hot shoe above it. The 0.5-inch EVF with diopter control is rated 2,359K dots. Colors are quite good, and while there’s a little lag, it didn’t affect our shooting. Stereo mics flank the EVF. There’s also a locking mode dial (also new), Custom 1 and C2 buttons, as well as an exposure compensation dial (+/- 3 EV steps). On the sloping grip is an on/off lever, shutter, and nearby jog wheel.

On the rear is a fold-out, 3-inch tilting LCD. With a 1,229K-dot resolution, we didn’t have issues looking at it in direct sunlight (just turn on the Sunny Weather option in the settings menu). We wish Sony had included a touch-capable LCD, however.

To the right of the monitor is a Custom 3/Enlarge key along with another jog wheel, an autofocus/manual focus lever, and Auto Exposure Lock (AEL) button. You’ll also find Function, Playback, and Custom 4/Delete button (C4 is also an addition). There’s also a control wheel with center OK button. You can access Burst/self-timer, Display, and ISO options by pressing the edges of the wheel.

On the right side is the SD card slot and NFC tag. There’s also a small red-dot video button on the edge, and like A7 models before, this button has always been difficult to feel and reach; fortunately, you can designate one of the Custom keys for this function, making it much easier to use. The left side has two compartments for HDMI, USB, headphone, and mic inputs. On the bottom is the battery compartment; the supplied power pack is rated 290 shots (with the EVF enabled) so a spare is a must. As a nice touch Sony supplies an extra, making it one of the few companies to do so.

The camera comes with two batteries, various caps, strap, USB cable, instruction manual, and a guide to using Wi-Fi/NFC. Sony supplies a trial version of Phase One Capture One 8 software for handling files. You should also download PlayMemories Mobile to your smartphone (iOS or Android) so you can send images to your smartphone or tablet.

Sony offers a one-year warranty for parts and labor.

Sony managed to pack a lot of innovative features into the A7R II (check out this tear-down from iFixit), one of them being that 42.4MP BI full-frame sensor. BI chips handle low light very well, and when combined with Sony’s tried-and-true Bionz X processor, this camera has an ISO range of 100-102,400. The still available A7R topped out at 25,600, as does the Canon EOS 5DS R. DxO Labs, which measures lenses and chipsets, gave the sensor a score of 98 points – the highest DxO has ever given, beating the Nikon D810 by just one point. We should add that the sensor also has one of the highest-megapixel counts.

Lab tests are one thing, but how does it perform in the real world? Pretty darn good, based on our findings. The Canon EOS 5DS is an excellent ISO performer and our sample subject held up very well at ISO 3,200, and even 12,800 was usable. The A7R II, however, reaches nosebleed heights: Our samples held up at 3,200, 6,400, 8,000, and even 64,000. This is really impressive, particularly if you’re a low-light shooter; using the Sony with a wide-aperture prime will put you in photography Valhalla. With the five-axis image stabilization, there was little blurring – a major improvement from the A7R.

The ability to shoot well in low light is an achievement, but the A7R II really shines in everyday shooting, when there’s good ambient light. Just look at our samples, because we think they say it all.

Having reviewed nearly all A7-series camera to date (we’re in the process of using the A7S Mark II, so stay tuned), we’ve grown accustomed to them. Getting up to speed was quite fast and we’re sure most experienced photographers will have no problem using the A7R II, as the menu system is very linear and straightforward, while improved over the original. Newbies might need to crack open the user’s guide, but there is a Smart Auto setting.

The mode dial has the aforementioned Smart Auto, PASM, Scene (nine options), Sweep Panorama, Movie, and two memory settings. We prefer shooting in Program AE as well as aperture-priority, which is a nice tool when using wide-open lenses. Although somewhat limited in focal range, the 90mm f/2.8 macro Sony supplied for our review was killer. (Sony also loaned us an f/1.4 35mm prime and an f/4 16-35mm zoom.)

Another improvement is the jump from 1080/60p AVCHD video recording to 4K XAVC-S (XAVC-S is Sony’s compression method that maintains a high bitrate). To fully appreciate it, a 4K UHD TV is a must. These televisions are coming down in price, but they aren’t universal yet. However, think of the A7R II (and other 4K-capable cameras) as a way to future-proof your videos. We’ve always liked 1080/60p video quality, and the Sony cranks it up with smoother, more accurate results – especially when set to 4K at 100 Mbps, and downscaled to Full HD. You’re going to love the results.

Be sure to check out our earlier articles (links at top), where we talk more about image quality and the camera’s specs.

The A7R II has built-in Wi-Fi and NFC for quick connections with smartphones and tablets using the PlayMemories Mobile app. Pairing with a Samsung Galaxy S5 was easy, as was sending images to the phone for sharing. The app is fairly basic but the A7R II supports Sony’s downloadable PlayMemories apps, which add additional functions to the camera.

Up your game and get the most out of your gear with the following extras, hand-picked by our editors:

Metabones Mount Adapter ($459)
This EF-to-E mount adapter not only lets you use Canon lenses, but you can autofocus some of them too.

Fotodiox Pro Cinema Black Sharkcage ($325)
If you’re shooting videos, a rig like this comes in handy.

Whether it’s photos or videos that you enjoy shooting, the A7R II is a very complex, but terrific all-around camera. It is the best new camera of 2015. We believe any enthusiast photographer will be extremely pleased with its extensive capabilities, and most importantly, the results that pop up on your monitor or those from your printer. If you want more megapixels, you could go with the Canon EOS 5DS/5DS R, but it is bulkier with limited movie/ISO ranges. With the A7R II, you get superb photos, 4K videos, built-in five-axis stabilization, a great AF system, and the ability to use some Canon lenses, just to name a few. We feel this camera is definitely worth the hype. If you can afford it, buy it.

Updated December 28, 2017: The A7R Mark II remains a competent camera by today’s standards, but Sony has now superseded it with the A7R Mark III, bringing with it a new sensor, faster performance, and much more. Read our hands-on review for more information. This A7r Mark II review was originally published on November 5, 2015.