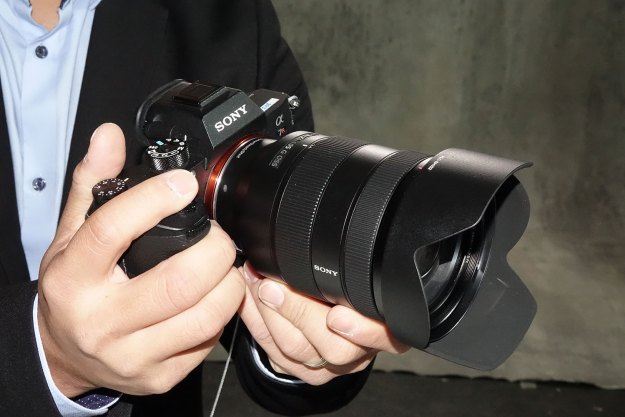 “With big improvements to battery life and performance, Sony’s A7R Mark III is a worthy successor.”

Sony just added a new member to its full-frame A7 mirrorless lineup, the $3,200 A7R Mark III. The camera is due to go on sale in late November, but Digital Trends joined other members of the press for a hands-on session with the camera during the Photo Plus Expo.

As was the Mark II before it, the A7R Mark III is clearly targeting professional users. And as expected, we have no problem telling you right up front that it is a winner. In fact, our biggest complaint is simply the fact the test period, at around three hours, was just too short. We barely got a chance to dig into its deeper capabilities.  Rest assured, we’ll have a more complete Sony A7R Mark III review when production cranks up and we get the chance to spend more time with the camera, as it deserves.

The design is dialed in

Since we have reviewed or had hands-on time with nearly every A7 model — as well as the new the A9 — we are quite familiar with the styling, control placement, and menus. Sony really fine tuned its full-frame model design with the second generation cameras, and things have changed little for the third generation. That said, there are a few new additions to the Mark III, including more menu options and a joystick control on the back. Beyond this controller, you’d be hard pressed to tell the A7R Mark III from the Mark II — other than the name badge.

Sony executives stressed that while the Mark III uses the same 42.4-megapixel full-frame sensor, the inner electronics have been completely revamped, including a new autofocus system, enhanced image stabilization, and much faster burst rate (10 frames per second).

One thing they also noted was improved battery life, which will undoubtedly be a very welcome change for Sony mirrorless shooters. Battery life has always been a weak point of mirrorless cameras in general, and the Sony A7 series in particular. With the new model, Sony claims 2.2x more battery life, but based on our experience, that may be a conservative estimate. We shot almost constantly for three hours using the 10 FPS burst mode as well as 4K video. The battery was still chugging along at 40% capacity even as we filled our 64GB SD card with images and video clips. (The camera also gains a second SD card slot, although only one supports the high-speed UHS-II standard.)

To be sure, even with the improved battery life (a claimed 600 shots using the LCD), the A7R Mark III is still outdone by pro-grade DSLRs, which could easily offer twice as many exposures per charge. Still, the improved battery life makes this camera much more user friendly on long shoots, and we can already hear the cries of thank you from Sony fans around the world.

Of course, no new camera is complete without a new lens. The lens Sony gave us for our hands-on test was the new FE 24-105mm f/4 constant aperture G-series model with built-in optical image stabilization. The lens is due the same time as the new body (late November) and costs $1,299.

At 1.46 pounds, it’s the lightest full-frame 24-105mm f/4 lens on the market, about half a pound lighter than the Canon equivalent (although, Nikon’s 24-120mm f/4 offers more reach and weighs just 1.56 pounds). We found the rig to be quite comfortable, and the lens performance was certainly decent. At 24mm, it delivered nice cityscapes without too much distortion, and at 105mm, it offers enough telephoto reach for portraits, even if the f/4 aperture doesn’t produce a terribly shallow depth of field. As always, lens preference is very much up to individual taste, but we found this combo to be a good one for walk-around shooting.

Sony claims 2.2x more battery life, but that may be a conservative estimate.

Sony typically offers a variety of shooting venues to test their gear and this was no exception. In particular, many subjects were designed to test the new high-speed shooting capabilities of the Mark III. We had models showered with paper flower petals and dancers of all types (ballet, modern, ballroom), and even a George Clinton lookalike singer.

The more static subjects were lit with studio lights, so we could take controlled single shots. Here, one of the camera’s  best features is eye AF. We’ve seen this in other Sony cameras before, and it works incredibly well in the A7R Mark III. Simply turn it on, and the camera recognizes your subject’s eyes and places the focusing box right on top of them. Results are remarkable.

When shooting dancers, Sony gave us the opportunity to tie into a complex strobe set-up. One of the A7R Mark III’s lesser-known features is its ability to shoot strobe bursts at 10 FPS, which even outdoes the speed-focused A9. We got some great shots here, and we certainly can’t complain about somebody else taking the time to set up the lights for us. The high burst rate and new AF system worked together to produce some impressive results.

The 42.4MP files are still quite large, though, so you will wait a bit as the camera saves the image sequences to the card. Thankfully, Sony has made this much less painful than in previous A7 cameras as you can now access the menu system without having to wait for the camera to finish writing to the card.

One thing we should mention about shooting in burst mode is that, if you have the camera set to save compressed RAW files, it will automatically lower the bit depth to 12 bit. You can shoot uncompressed RAWs at 14-bit just fine, however. This is something to be aware of if you like the space savings of compression but don’t want to miss out on those two extra bits when you switch to burst mode.

There were no real surprises on the video front, but there are some changes worth noting. Read-out speed has been improved, which reduces the effect of rolling shutter. However, it is not to the level of the A9 (for which Sony came up with a special “anti-distortion shutter” label).

The high burst rate and new AF system worked together to produce some impressive results.

While the A7R Mark II offered a log gamma profile, the Mark III gains the latest S-Log3 version which captures slightly more dynamic range compared to the old S-Log2. What’s more, it now supports Hybrid Log Gamma (HLG), a feature also found in the Panasonic GH5. We didn’t test the feature in our short hands-on period, but HLG offers filmmakers a way to shoot for both standard and high dynamic range at the same time, with an HDR grade being saved in metadata and automatically applied when played back on support screens.

As always, colors and sharpness in video were very good. Sony says 4K quality has been improved in both full-frame and Super35 modes, but remarks that Super35 is still the way to go for maximum sharpness as it oversamples from roughly a 5.2K region of the sensor.

None of these improvements are likely to affect the average shooter, but video pros will definitely appreciate them.

What remains to be seen

Sadly, we weren’t able to test one of the headline features of the A7R Mark III: Pixel Shift Multi Shooting. It is similar to the High Res Shot mode found in some Olympus Cameras and the Pixel Shift Resolution mode in several Pentax DSLRs. Requiring a tripod, this setting takes four sequential frames, using the sensor-shift stabilization system to shift the position of the sensor by a single pixel between each frame. It repeats this in a box pattern to capture full color information at every pixel location.

A single pixel is only sensitive to one color light (red, green, or blue) and digital images normally need to go through a “demosaicing” process to turn those single-color pixels into full-color images, which reduces quality. Pixel Shift means images don’t need to go through the same process (although, at this time, they do require special software to merge the four frames into one). Sony demonstrated the differences between standard and Pixel Shift Multi Shooting modes in a video; it makes an especially big difference when photographing fine patterns, which otherwise produce the rainbow false color effect known as moiré.

We also saw some sample prints shot in the mode that were quite impressive. But, again, we must withhold judgment until we actually get to try the feature ourselves.

When Sony executives introduced the A7R Mark III, they used terms like “groundbreaking,” “world’s first,” “world’s best,” and “the world’s fastest” — along with other superlatives. Our own description of the camera may be a bit more reserved, but we can’t argue that the Mark III is an impressive addition to Sony’s line-up, and a significant improvement in key areas over the Mark II.