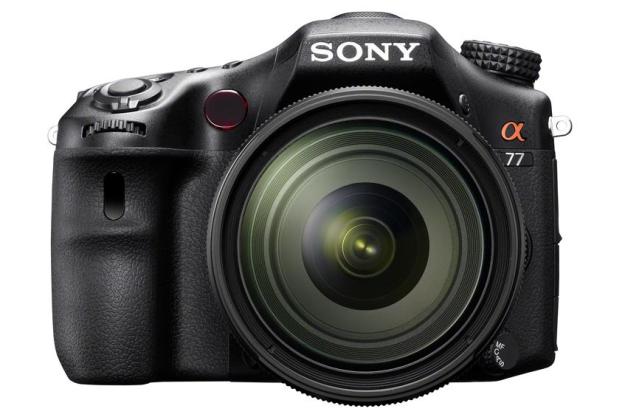 “Although on the expensive side, the Sony SLT-A77 is one of the best DSLRs we’ve reviewed in the past year or so.”

Sony’s current top-of-the-line DSLR gives its Canon and Nikon competitors a major run for the money, as we’ll see shortly.

The SLT-A77 looks like a traditional enthusiast DSLR – it’s big, heavy and peppered with buttons and dials. But inside the camera, things take a very cool turn. The A77 features Translucent Mirror Technology, which greatly enhances live view and HD video capture, among other things. We’ve been big fans of this technology since it was introduced and have always preferred shooting DSLR movies with it. The phase detect autofocus is so far superior to competitors’ contrast detect AF it’s not even a contest. Because the A77 has a 24.3-megapixel APS-C sensor, this model now is at the top of the current affordable DSLR mountain. Yes, we know Nikon has a 36-megapixel full-frame model, but the D800 is more than twice the price of the SLT-A77 and targeted to serious enthusiasts and pros. Mere mortals can afford this camera.

The key feature on the front is the Sony A mount. The company has more than 40 lenses to choose from, giving you an excellent selection of focal lengths and prices – affordable through megabucks. Also on the front of the A77 is an AF assist lamp, remote sensor, focus mode dial and preview button.

On the top is a solid main mode dial, hot shoe, auto pop-up flash, stereo microphone and good-sized status LCD with nearby illuminating button. Other keys include self-timer/burst mode, white balance, exposure compensation and ISO, the important parameters picky photographers use most often. On the grip is the shutter button surrounded by the power switch; a jog dial is close to your index finger. The grip itself has a nice feel, thanks to a textured surface and deep indentations for your fingers.

You’ll need this sturdy grip because the A77 is on the heavy side, weighing 23 ounces (body only), 27.8 ounces with battery and card. The camera has a magnesium-alloy frame, as do most members of this class. Add the 20 ounces for the lens we primarily used for this review, and you’ve got close to three pounds in your hands. The camera measures 5.75 by 4 by 3.25 inches, which is typical.

The A77’s rear has two outstanding features: a .5-inch OLED viewfinder and 3-inch swivel LCD screen. This electronic viewfinder (EVF) is rated 2,359K dots and gives an extremely accurate representation of what you’re framing. Because the viewfinder is electronic, not optical like DSLRs, you can see the impact of your adjustments (WB, filters, exposure compensation and so on). A digital level gauge shows you if your horizons are straight. The bright screen makes seeing your current settings easy as well. Even if you don’t buy this camera, check out the OLED screen. The adjustable LCD monitor is solid, but not over-the-top like the EVF. It’s rated 921K dots with nice contrast and lets you hold the camera at different angles rather than simply straight out from your face.

We won’t bore you listing all the keys and controls on the back; just check out the photos. We will note the camera has the classic red dot movie button, another jog dial as well as a joystick controller.

The right side of the A77 has a media card slot (SD/Memory Stick), and the left side has various ins and outs for flashes, remotes, DC-in, mics, HDMI and USB. Oh, we neglected to mention the A77 has a built-in GPS (the tiny logo’s here) so you can geo-tag your shots. On top of that, the DSLR is weather- and dust-resistant; all compartments click shut with reassuring sounds. Don’t drop the camera in the ocean, but it’ll handle mist, rain showers and dusty environments.

The bottom of the made-in-Thailand camera has a metal tripod mount and battery compartment. The supplied lithium ion battery is rated at around 500 shots; so you should be good for the day.

If you buy a bundle, you’ll find the camera body and lens. Besides the DT 16-50mm lens, Sony is also packaging the camera with an 18-135mm zoom for $1,699. Other supplied gear includes a battery, charger with AC cord and various caps and straps. You also get a software CD-ROM for handling images and developing RAW files.

Twenty-four megapixels? Not really a big deal anymore, especially because you can purchase an entry-level Nikon D3200 with that capability for $699. Plus Sony has a mirrorless model with similar resolution (NEX-7) as well as the SLT-A65 DSLR, a less-featured version of this camera. Still you’re now capturing 6000 x 4000 pixel files, which are more than enough for 99 percent of the photographers out there. Consider this: The A77 has a Smart Teleconverter that enlarges your image 2x but drops the resolution to 12 megapixels, meaning you can still get a solid print. We set the camera at maximum resolution for stills and AVCHD Progressive videos at 28 megabits per second, a level many inexpensive camcorders do not match.

We used the SLT-A77 for several weeks, taking it with us on summer travels. When done grabbing our myriad stills and movie clips, we did pixel peeping on a PC, made full-bleed 8.5 by 11.5-inch prints and reviewed our videos on a 50-inch 1080p plasma HDTV.

Because we’re big fans of the movies taken by Translucent Mirror Technology DSLRs, let’s deal with them first. As noted earlier, TMT cameras use phase-detect autofocus, which is faster and more accurate than competing DSLRs and mirrorless models. This means that rather than concentrating on focus like a pro camera operator, you can point, press the record button and capture the scene just like a classic camcorder. You also can use the inherent capabilities of a DSLR – interchangeable lenses, manual controls, filters and so on – to improve quality. And because the camera has an electronic viewfinder, you don’t have to use the live view on the LCD to frame your scenes. You can hold the camera to your eye for more stability. Speaking of shaky images and videos, the A77 has built-in sensor shift stabilization so all of your lenses are stabilized rather than you having to buy special glass.

When we visited an aquarium in Mystic, Conn., we captured eerily illuminated jelly fish swimming in an indoor tank. The colors, motion and focus were all top-notch, although we detected a bit of digital noise. When we shot subjects outdoors, we experienced no noise issues. We can totally understand why the market for full-featured camcorders is in the tank. Why buy a separate device when you can get movies this good from your still camera? And yes, we’re fully aware of smartphone videos, but they can’t compare to AVCHD Progressive on a big screen. We recently shot videos with some Nikon DSLRs and Panasonic mirrorless cameras. The A77 is so much better and easier to use that the difference is not worth discussing. That’s not to say TMT is perfect, because on infrequent occasions it had trouble grabbing focus, and it had some noise issues. But the overall experience and results far surpass competing cameras.

The A77 is primarily a still camera, and we took hundreds of images in upstate New York and Cape Cod, Mass. We quickly got used to the button placement, and we really liked the OLED EVF, using it most of the time rather than the adjustable LCD.

As we mentioned, Translucent Mirror Technology offers real pluses beyond movie making. A glance at the main mode dial tells part of the story. Along with the usual auto, Auto+ and P/A/S/M, you’ll see an icon with a “12” on it. The A77 can fire a burst of 12 frames per second. You may not grab a bullet blasting through an apple, but you certainly can capture the antics of kids and other fast action. We tried this mode on an indoor pot of boiling water to see how well the camera could capture the fast-moving bubbles. It did but there was some digital noise. Outdoors, however, this was much less of an issue. Are we detecting a theme here?

The Sony SLT-A77 has a basic ISO range of 100 to 12,800, but can be set to 50 on the low end and 16,000 at the max. The camera handled ISOs very well up to 3,200 in our tests but fell apart afterward. You can get away with a small print at 6,400 but beyond that, prints will be poor with loads of digital noise and color shifts. Definitely use a fixed ISO setting at lower levels. Our test showed the high quality of the sensor shift stabilization system, because we could handhold the camera at very slow shutter speeds with hardly any blur.

The beefy DSLR has a load of still options besides those mentioned, including 3D, 2D/3D sweep panorama and scene (eight options including handheld twilight, a favorite of ours). More than a dozen filters including HDR painting give your images an other-worldly feel as well as auto HDR. The list is long – as you’d expect from a $1,399 DSLR.

Even so, we spent most of our time just taking straight-ahead stills with the fine f/2.8 16-50mm lens (24-75mm 35mm equivalent). This lens offered just the right amount of wide-angle perspective, the type of shooting we prefer. The camera grabbed focus quickly and was ready to go at all times. The A77 has a 19-point AF system, and 11 are cross type with available shutter speeds of 30-1/8000th of a second. At no point did the camera hesitate, and we just fired away. For the record, the less-expensive A65 may have the same resolution, but it is only a 15-point/3 cross-type system with a top shutter speed of 1/4000; maximum fps is 10, hardly slow. But the A77 is 12.

We liked the results of the A77 even when shooting JPEGs rather than RAW. Colors were among the best we’ve seen from an APS-C sensor (full-frame models still reign supreme, however). Reds had a lusciousness we hadn’t seen in a classic DSLR. In fact, overall color rendition was excellent, including skin tones. You’ll be pleased with the SLT-A77’s results. This is one fine camera.

Although on the expensive side, the Sony SLT-A77 is one of the best DSLRs we’ve reviewed in the past year or so. The combination of high-quality stills and excellent video – without focusing hassles – takes this camera to Editor’s Choice status. The camera’s not perfect, but you can tweak the results to your tastes as you master its many options. We recommend this camera with the DT 16-50mm lens to anyone willing to make a serious imaging investment.