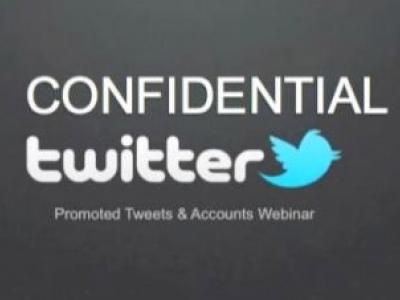 Twitter recently assured us that it is making money – but it’s admittedly taken awhile for the social site to make revenue a priority. Now, it’s ready to move full steam ahead with its advertising department.

After introducing promoted tweets and promoted accounts last year, Twitter will take things to the next level with a fully fledged advertising sector. A confidential memo has leaked and been published by All Things D, which details the company’s plans to cross $100 million in revenues this year. According to some estimations, this is completely within the realm of possibility. A leaked 40 minute Webinar solicits potential clients, and breaks down its tweet-to-earn technology.

The report also reveals that while Twitter’s ad click-through rate is 0.3 percent, its “engagement rate” is higher. What’s an “engagement rate”? For Twitter’s purposes, it’s how often users retweet or like an ad. So what kinds of ads get attention? The presentation says those that are funny, topical, and informative to best – and linking to external content never hurts. Apparently, Twitter is still measuring this type of user response, and new clients who want to be included in the experiment have to pony up $5,000 for ad services.

Twitter takes a moment to also preemptively address the user outrage that is sure to follow its new ad scheme. Being built on the Tweets of its massive consumer base, making money off this popularity is easily going to ruffle some feathers and cause some to call “sell out.” But according to the Webinar, these naysayers are overwhelmingly in the minority.

Aside from Twitter’s $100 million prospects for 2011, the document is more or less a guide to promoting your brand on the site effectively. But the amount Twitter intends to invest in advertising could signal a massively different user experience is on its way. Twitter itself acknowledges its new priorities, noting that its “ad products are very new; users are averse to change.”

Twitter reportedly plans to enable Edit Tweet for everyone this week
Twitter’s edit button could soon be free for all users
Twitter Blue is losing Ad Free Articles and Musk’s latest tweets indicate further changes
Twitter to start charging for verification mark, reports say
What do the eyes mean on your Snapchat Story?
Elon Musk finally in charge of Twitter, reports say
Elon Musk officially owns Twitter now: a timeline of how we got here
How to use Twitter Advanced Search
Having trouble accessing your Instagram account? You’re not alone
Elon Musk considers bringing Vine back from the dead
Staying on Twitter? Here are two ways to make it easier
Elon Musk now Twitter CEO after firing entire board
Clear Mode on TikTok: Here’s what it is and how to use it