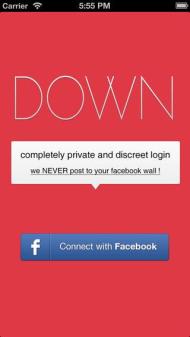 “Be right back,” notorious hook up app Bang With Friends wrote on its website after being ejected out of the App Store for its so-called explicit content. Like many online acronyms, whenever you say LOL or BRB, it never actually means you’re laughing out loud or returning fairly soon. BWF lives up to that Internet social mentality as it finally rebounds with the App Store three months later, arriving with a much more modest title: “Down.”

Down? Down to what – hug, slow dance under the stars, see a comedy show, play beach volleyball, or wreak havoc in a karaoke bar? If you’re just as confused as we are, that’s exactly the point. Such vagueness is intentional so that Apple won’t deem the app R-rated, though everyone knows what users are really down to do. The app’s startup screen also removes the suggestive scantily-clad model hanging out in bed and opts for a Safe-For-Work pink screen. Flashy, but not inappropriate by any means.

In case you’re one of those PG users who just want to find a few new friends to roll with, the new Bang With Friends now offers a “Down to Hang” button if you want to go in the nice guy route. Conversely, you can be “Up to hang” (doesn’t make a lot of sense, but play along) if you want people to hit you up for that new blockbuster flick premiering next week.

The name change also removes BWF from the legal mess with Zynga, who claims that the use of its “with friends” trademark is an infringement on the gaming company’s brand. However, the original Bang With Friends name remains on the Android version, and the company is still listed as Bang With Friends, Inc. which suggests that the lawsuit is ongoing.

Everything about the app remains the same: You connect the app to Facebook to check your friends out in a romantic or … urr, friendly, way and let them know you’re interested. If they have expressed the same feelings about you, the app will connect you both. With the added “Down to Hang” feature, it would make sense if you could request this with friends of friends, but perhaps that’s getting too into far the creepy territory. Who are we kidding – as if this app could surpass that level!

Down is available for free now in the App Store.

Topics
TikTok is banning campaign fundraising on its app
This beloved TikTok hashtag just got its own app feature
Instagram has finally fixed the Stories sound bug in the latest version of its iPhone app
Twitter says it’s fixed Monday night’s service outage
Elon Musk reveals date for Twitter Blue relaunch
What is Twitter Blue and is it worth it?
Twitter closes offices as ‘work pledge’ deadline passes
What is Ambient Mode on YouTube?
What is BeReal?
How to delete a BeReal post
How to use TikTok’s voice changer
Twitter attempts to sort out verification system with new badges
Hive Social is my favorite Twitter alternative, but that’s not saying much