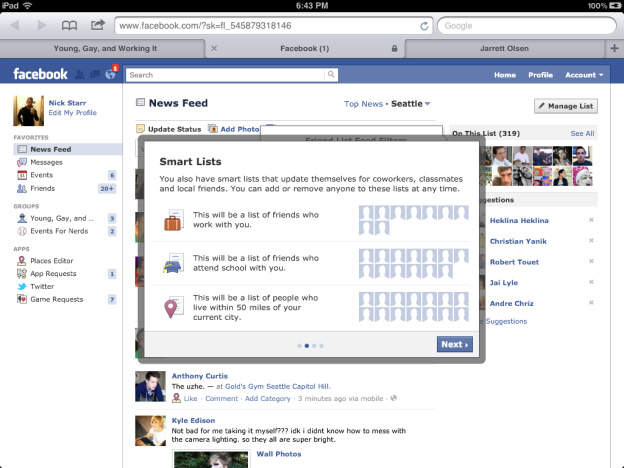 Facebook has been busy revamping its security and privacy measures this summer, to varying degrees of success. And as much as the site likes to protest that the launch of Google+ has nothing to do with these overhauls, more than a few of the changes seem to echo the purpose of its new competitors Circles tool.

But none more than the soon-launching Smart Lists. Mashable has obtained images (check them out after the break) showing that Facebook has begun testing this new application, which filters your News Feed to better target the information you share. Smart Lists automatically group your contacts into three groups: Work colleagues, old classmates, and those who live within 50 miles of you. The idea is that, much like over at Google+, you can post updates for certain groups of people instead of blasting your entire network with information that only applies to small segment of your friends.

And before users complain about Facebook pre-determining these lists, manual Friend Lists aren’t going anywhere. Users are still able to create their own contact groups, labeling them things like “Family,” or “Soccer Team” and choosing what information is or isn’t sent their way. There will also be a renewed focus on Friend Lists, with more explanation from Facebook on how best to construct your own lists (with wording very similar to how Google+ describes Circles).

Facebook has been tweaking how its Friend Lists tool has worked, but it’s remained a seldom-used feature of the site. When Google+ launched, critics praised its Circles application for doing something Facebook hadn’t – when in reality, it was really just doing it better. An auto-list might encourage users to create their own friend groups, or at least use the pre-determined lists to limit the audience to their News Feed posts.

Smart Lists hasn’t officially launched yet and is only rolling out to a handful of users, but already there’s been some backlash. Facebook has been flooded with copy-pasted posts announcing the site is not limiting your News Feed on its own, showing you posts from friends you interact with most. We assume this could be related to a mass launch of Smart Lists. Regardless, if you’d like to change it, here’s how:

Topics
Breaking down the Twitter whistleblower allegations and how it affects the Musk takeover
Facebook Messenger finally starts testing end-to-end encryption for all chats
This Twitter vulnerability may have revealed owners of burner accounts
Oh great, now our Twitter data is for sale on the dark web
What is Mastodon? Here’s why everyone’s talking about this Twitter alternative
Elon Musk reveals date for Twitter Blue relaunch
What is Twitter Blue and is it worth it?
Twitter closes offices as ‘work pledge’ deadline passes
What is Ambient Mode on YouTube?
What is BeReal?
How to delete a BeReal post
How to use TikTok’s voice changer
Twitter attempts to sort out verification system with new badges