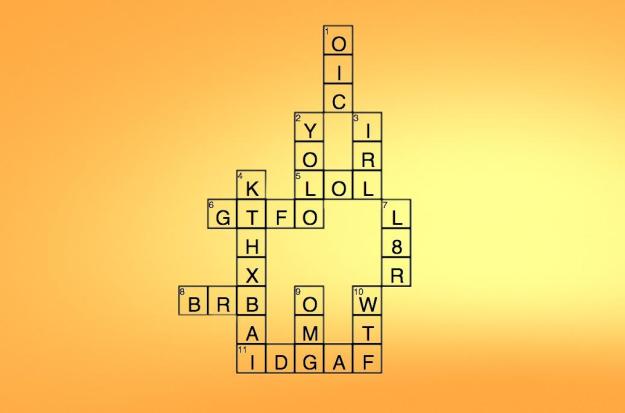 I can haz unadulterated English language? Definitely not – the Internet has a huge influence on our vocabularies and favorite sayings. But don’t worry about the downfall of English just yet. While some people worry that hashtags and emoticons will fundamentally diminish the spoken word as we know it, these fears are overblown.

When it comes to the way we communicate with each other, it’s obvious the Internet influenced some major changes: Email superseded snail mail, Facebook pretty much swallowed the idea of calling someone and wishing them a happy birthday, our job hunts are conducted through LinkedIn or Craigslist.

It’s slightly less in-your-face, but the Internet is also shifting the words we use to speak to one another, not just the way we choose to communicate. Our obsession with the Internet even influences the simple act of talking – out loud, in real life (IRL, if you prefer). Certain acronyms, neologisms, and abbreviations have infiltrated everyday speech – if I say something like “OMG, WTF, why did my ex like my status, obvi I’m unfriending him,” most people would know what I’m talking about (even if they’ll roll their eyes at how annoying I am). Since people often communicate online and through text messages, truncated turns of phrase and space-saving emoticons are now mainstream.

LOLing at the language changes

Internet-speak is firmly implanted in language now, and as we continue to live our lives online, new expressions and words will continue to develop. Just as languages evolved before – by interacting with other languages – we will adjust the way we use words based on what we do and see. And since what we see is so often the white glow of a computer screen, our language is impacted by the Internet. Linguist Ann Curzan has a term for this kind of back-and-forth: “electronically mediated conversation,” or EMC.

“Did you re-tweet Tom’s GIF link? Shaking my head.” My brother said this to a friend yesterday, verbalizing the popular “SMH” acronym aloud. And the sentence showcases a few different ways the Internet shapes language. Obviously, since we talk about the Internet, the content of the sentence is contingent on the Web. But the use of “re-tweet” shows how we adapt our language around new technological concepts.

“LOL can also be a way to acknowledge that a writer has received a text—a written version of a nod of the head and a smile.”

Twitter introduced the idea of a “re-tweet” as an action, but people informally incorporated it into their vocabularies as a verb. This happens regularly when new features appear online –  things like “rickrolling,” “icing,” “lurking,” “trolling,” and “fapping” arose from forums and spread mimetically, while Facebook gave us things like “liking” and “friending.” Oxford Dictionaries wrote a blog post highlighting how Facebook introduced a variety of new words and phrases into the lexicon, noting “Facebook has given a slightly different nuance to these familiar words.” So when it comes to vocabularies, the words we choose to use in our conversations now often give the impression of a logged-in life.

And we’ve already moved to a stage in Internet-speak where the original meaning of “LOL” has transformed. The Atlantic Wire talked to linguist Ben Zimmerman about it, who said LOL has definitely been undergoing a semantic shift, with its original humorous connotations becoming toned down or even disappearing entirely. Professor Curzan agrees, as she wrote in a blog post, “LOL is now a way to flag that a message is meant to be funny (similar to JK—‘just kidding’) or to signal irony. LOL can also be a way to acknowledge that a writer has received a text—a written version of a nod of the head and a smile.”

In other words, now LOL is more of a placeholder or a way to show that you’re listening than a way to say you’re laughing or you think something is funny. This is the most obvious sign of Internet-speak becoming divorced from its original meaning and taking on a new definition. And if you look at the evolution of the hashtag, you’ll see that the symbol can be used to signify a variety of moods and purposes.

Even though Internet and text speak pervade daily conversations, the influence of technology like SMS and Facebook on the English language is often overstated, according to renowned linguist Professor David Crystal, who wrote a number of books on text and Internet language. So has Internet-speak has given English an interesting boost? “No. It is too soon to say,” Crystal bluntly tells me. “The Internet has only been around for some 20 years, which is no time at all. It takes a lot longer for permanent or significant language change to operate.”

“But in speech, nothing. Most people speak today just as they did before the Internet arrived.”

Crystal also downplayed the role of the Internet further down the road, and emphasized that it’s futile to try to predict the future. When asked if he thought the Internet would eventually have a lasting impact on language, he sounds dubious. “No one should ever try to predict the long term linguistic future of a language. But in the short-term, no. Think of other technological events. When broadcasting arrived in the 1920s, we saw the arrival of all kinds of new styles, such as sports commentary and news-reading. Such things don’t seriously rearrange a language, whatever that might mean. They simply add new styles, and extend the language’s expressive richness.”

So even down the road, Crystal sees the Internet as a thing that will offer ways to supplement English rather than seriously disrupt or supplant it. He made that clear with his response when we asked him if he could name some of the biggest changes to language due to the Internet. “None. As the Internet is predominantly a graphic medium, the most noticeable changes have been there, not in speech at all. So there have been some interesting novel informalities in orthography, such as punctuation minimalism, and the arrival of emoticons. But in speech, nothing. Most people speak today just as they did before the Internet arrived. The occasional additional spoken abbreviation (such as LOL) is hardly a significant effect.”

In other words, Crystal notes that rampant use of smiley faces is a real thing, but he does not believe the Internet is really substantially changing the way we talk – that should be good news for frustrated English teachers who die a little inside each time one of their students yells “YOLO,” though I think his focus on the big picture overlooks just how common it is to hear acronyms and text speak in daily conversation.

But young people are spearheading the change

Even though Crystal downplayed the impact of the Internet on how we talk, it’s hard to deny how younger people are bringing Internet-speak into the mainstream. A 14-year-old girl from England recently wrote a blog post detailing some pertinent slang for older people, and it seems like they may need it — as reported by the New York Times, courts around the U.S. are using sites like Urban Dictionary to understand the parlance of their younger defendants.

Right now, middle-aged people did not grow up with the Internet; they started using it as teens or adults, so they don’t have the same relationship to how people talk online and through mobile devices — they’re not native speakers. But as the first generation of native speakers grows up and has children of their own — children who will no doubt be even more acclimatized to living online, if the babies I see playing with iPads are any inclination — the amount that Internet speak weaves into normal dialogue will become even more pronounced.

Of course, it’s not just Bieber-loving tweens who pepper Internet-speak into their conversations — it’s anyone who regularly uses the Internet or participates in Internet culture. And while sites like Reddit and Tumblr, with vocabularies specific to their online communities, used to be more on the fringe of society, now the president of the United States is doing Reddit interviews and making a Tumblr page.

So it seems likely that the Internet will continue influencing the way we talk as long as its an important part of society. But that doesn’t mean more changes aren’t up ahead. Will words like “unfriend” persist even after everyone gets sick of Facebook and moves on to the next big thing? Or will these types of words go the way of other antiquated vernacular like “groovy” or “daddy-o?” It’s possible that many of the recent changes to the mainstream vocabulary are as impermanent and trivial as Crystal suggested — but it’s also likely that they will be replaced by other words that stem from our lives online.