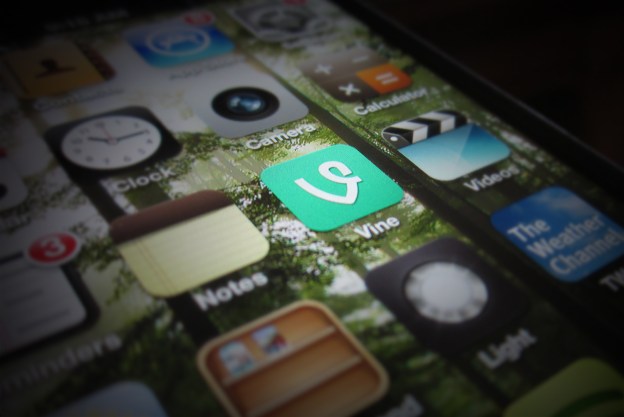 Celebrities love to interact with fans and promote their work (and themselves) on Twitter, and now they’re flocking to new video-sharing social network Vine to do the same. Big names like Jimmy Fallon and Kate Upton are uploading goofy six-second looping videos to the site, giving fans a glimpse into their lives. And brands already figured out the app’s value as a promotional tool. From Cadbury’s to Armani to Gap, big names are signing up to stay up-to-date on the latest social marketing trend. There’s even a site called Brands on Vine collecting the best of these corporate-sponsored video snippets.

And Vine is following Twitter’s footsteps and handing out verification badges to noteworthy users, establishing a hierarchy amongst users that values people and companies on the hunt for yet more exposure – because there is no such thing as enough when it comes to social self-promotion.

Vine’s explosive popularity isn’t a bad thing – this is the stuff of startup app-maker dreams. As more people use the service, chances increase that someone will do something really original with the platform. Most people are embarrassed by the first things they tweeted years ago, and some of our first Instagrams were likewise lame – that fact that most of them were taken with the iPhone 3 means quality suffered greatly. That will probably be the case for Vine in a few years. People using Vine are just getting a feel for what you can do with its services, and they will get better at making entertaining Vines as time progresses. (Sidenote: have we settled on a verb for making a Vine yet? Vine-ing? Vining? Vineifying? Get back to me.)

You can already see how people are getting in the swing of things with this new medium and having fun. If you go to the “Explore” section and check out the “How to” section, you’ll see tons of clever instructional videos, ranging from straightforward gaming tips to silly entries on how to get fired or be a ladies’ man.

And even if people join Vine to showcase their talents instead of just on a lark, that doesn’t mean what they produce will necessarily be self-promotional garbage. Animators and artists are using the medium to create beautiful, funny pieces:

Professional funny people like The Daily Show correspondent John Hodgman and show writer Travon Free played with the app and with hilarious results, releasing a slew of funny videos. These clips show how people can use Vine to communicate and joke around with each other, just as they do Twitter.

And journalists are getting the hang of Vine, too. One intrepid reporter in Ankara, Turkey, used Vine to capture the aftermath of the bombing of the American Embassy at the beginning of February. As writers and newsmakers get more accustomed to the app, they may pull it out to spontaneously record important moments.

Twitter manages to straddle the line well between creative communication outlet and publicity tool, but with so many big brands and self-promotional celebrities glomming onto Vine so soon, it might prioritize monetizing the service over making it as interesting as possible. When something blow up like this, it’s a boon for the creators, but sometimes a bust for users. Risks get avoided and focus shifts to how to profit.

Vine isn’t just a random app skyrocketing to success. Twitter bought it back in October 2012, and this lightning-fast rise is no coincidence.

Vine undoubtedly wants to keep growing. But it needs to keep a firm grip on expanding without diluting the quality of the videos uploaded with promotional materials. Companies are going to keep trying to use it as a PR vehicle, and the app may need to do something to prevent companies from becoming too dominant a voice. There’s already Vine analytics services and a tutorials prepping companies to take advantage of the app, and we’ve barely just gotten our hands on it.

If you go to the website Vinepeek, you’ll see a constant stream of unedited new Vines playing. Some are boring, but many are wonderful – footage of babies playing, dogs frolicking, delicious foods being cooked, people working and laughing. There are celebrity spottings and artfully edited videos of morning commutes. It’s a hypnotizing site that gives you a glimpse of how interesting Vine can be. But if brands and companies start to embrace Vine as a marketing tool, Vinepeek might start looking less like a collection of slices of life and more like a collection of slogans.

Vine’s exponential growth is great, but hopefully Twitter won’t over-do it trying to monetize the service and lose sight of what could make it truly great: It’s a platform that offers a lot of wiggle room to get weird and be creative.

Social networks like Facebook and Instagram have both come under fire for privacy snafus, but at one point each held a special place in users’ hearts as a beloved tool. Facebook traded exclusivity for mainstream success, and even though it lead to massive expansion and going public, it also changed the way people used it. When it was solely the domain of college kids, people weren’t as worried about what they put on the site; it was a way to see peers, not establish a new public persona. All of that changed as it grew, and though the site remains extremely popular, people don’t hold it in the same esteem. And Instagram’s trajectory is looking similar. What started as a little, unique place to share with friends online exploded into one of the most popular mobile apps, and Instagram’s deal with Facebook and privacy agreement scandal diminished its status as a truly special social app.

Vine’s videos are automatically set to public. You can’t fine-tune the privacy settings because there are none. What you put up is meant for everyone’s eyes. This reflects the way things are headed at Facebook and Instagram, and it doesn’t take away from Vine’s potential as an awesome creative tool. But it also might stymy an environment of experimentation. Since Vine is already affiliated with Twitter and designed for totally public sharing, it may end up attracting more brands looking to promote than people looking to say something new.