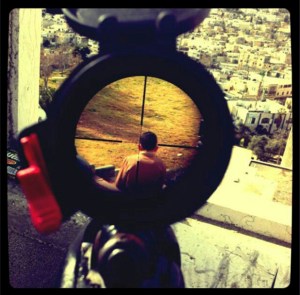 When the Israeli Defense Forces first joined Instagram last fall, the reaction was a mix between intrigue and terror. Some shots reveal very human aspects to the daily lives of these young soldiers photographing themselves just like your average teens would. In others, soldiers are at the firing line and ready for combat, invoking the reality of the situation abroad. Although the account has since been deleted, some Israeli soldiers maintained their own Instagram accounts – including one Mor Ostrovski, 20, who has sparked controversy after posting a disturbing photo of a child in a sniper’s crosshairs.

The original photo was posted late January but emerged last week on the pro-Palestinian news site Electronic Intifada. While there is no evidence that the child was shot or if Ostrovski even took the photo himself, a rightful public outrage has forced Ostrovski to delete his Instagram account. The IDF is also launching an investigation on the matter, noting that the photo “doesn’t accord with the IDF’s spirits and values.”

Organizations and news outlet around the globe has also criticized the picture, claiming it is “tasteless and dehumanizing.” Breaking the Silence, an Israeli non-governmental organization of veteran Israeli soldiers that raises awareness about life in the West Bank further condemned the image. “Technology and media have changed. The distribution of images has changed,” the organization wrote on its Facebook page. “But the exaggerated sense of power and the blatant disregard for human life and dignity have remained: this is what occupation looks like.”

Topics
How to download Instagram photos
Facebook expands its ban on QAnon conspiracy theory accounts
Instagram back online after brief outage Wednesday
TikTok boss calls out Facebook, Instagram to team up against Trump ban
What is Twitter Blue and is it worth it?
Twitter closes offices as ‘work pledge’ deadline passes
What is Ambient Mode on YouTube?
What is BeReal?
How to delete a BeReal post
How to use TikTok’s voice changer
Twitter attempts to sort out verification system with new badges
Hive Social is my favorite Twitter alternative, but that’s not saying much
Elon Musk meets Apple’s Tim Cook to settle dispute