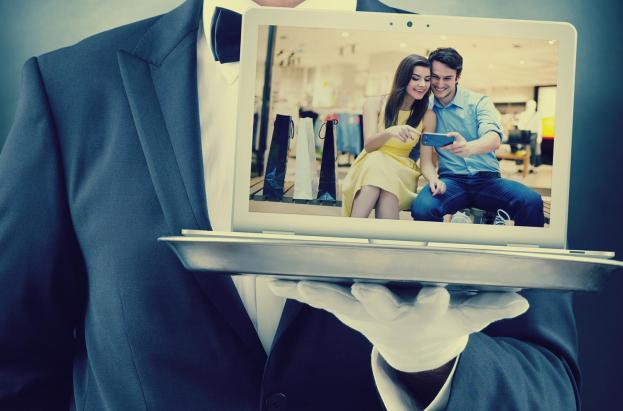 The Internet is a wonderful if confusing world – and that’s why you sometimes need to be pointed in the right direction. Lucky for you, some of us spend far too much time online and logged in – and that wealth of experience translates into some social networking know-how. Consider Miss Netiquette (who you can reach at netiquette@digitaltrends.com) your guide to Web manners, and this week, she’s going to give you some tips on how to use social media with your significant other without driving everyone you deal with online insane.

Social media is a great place to share personal updates, including pictures of your family trips, baby photos (within reason), and activities you do with your partner. Couples can use sites like Facebook as digital archives of their romance, and Facebook certainly plays into that – it lets you track the course of your relationship, from the very first wall post to last week’s poke. But some people have a hard time figuring out where to draw the digital line when it comes to online coupledom, and wind up making their social media persona less of an individual activity and more of a share-everything two-person outing. Instead of giving someone a house key to signal that you’re getting serious about a relationship, nowadays an even more serious show of commitment is handing over your Facebook password – or letting someone post a tweet from your account. When does sharing online networks become a liability and a nuisance?

Dear Miss Netiquette: My parents have a joint Facebook account and it’s driving my family nuts. We never know who’s saying what. Their joint Gmail is one thing, but this is another thing entirely – right?

Joint email accounts are awful, but joint Facebook accounts are even worse – and Facebook is really not meant for two people to share one account. It’s hard to dissuade older couples who came late to the Facebook game that having a joint account is weird, but I do have one suggestion. You should encourage all of your family members to start giving all the credit to one of your parents for writing on the account – preferably the person in the couple who is less interested in social media. If your dad writes something on your wall and you respond with “Thanks Mom!” enough times, he might get frustrated with not getting recognized and want to get an account on his own.

Dear Miss Netiquette: I’m friends with an awesome couple. They’re always out doing cool stuff. But they’re also getting really annoying because they go everywhere cool together, so they tend to post the same exact pictures. So I keep getting double-updates. I don’t need to see two identical shots of a winery back to back. Should I say something?

Well, this is a little tricky. Do your friends have the same friends online? If they have different circles of friends and you just happen to be their shared bud, they’re probably both posting so that everyone sees what they’re up to – and you can’t really blame them for that. If they’ve been together since high school and have the majority of their social networking pals in common, then it makes sense to suggest that their dual photography schtick is getting redundant. A light-hearted, “I feel like I see your photos in doubles only!” might do the trick. Otherwise, the only thing you can do is change your settings so you only get updates from one half of this couple. Or just accept that sometimes you get not one but two unnecessary brunch pictorials of salmon Eggs Benedict.

Dear Miss Netiquette: My boyfriend and I share a Twitter account, but he keeps re-tweeting Men’s Health, and some of the stuff is really lame. How can I convince him to cool it?

The problem isn’t that your boyfriend is re-tweeting Men’s Health. The problem is that you’re sharing a Twitter. Just get your own! It will give you total control over the account, and as an added bonus, you’ll both have an extra follower than you did before: each other. And to be honest, since the idea of a couples’ Twitter is pretty obnoxious, you might end up with more than one added follower if you branch off and get your own handle.

Dear Miss Netiquette: My boyfriend gave me his password and then we broke up. I couldn’t resist the urge to log on and see what he’s up to – and apparently he’s up to a LOT, and I read messages he wrote to new girls. I feel awful about snooping and I wouldn’t have done it again, but he figured out that someone logged onto his account from an unfamiliar location and now he says he’s going to sue me! AH!

Exhibit A as to why password sharing can really only lead to trouble. He’s probably not going to actually sue you – and while he might argue for online harassment, it probably won’t go through court – but he can report you to Facebook and that may leave you with a blocked account. I’m glad you learned from your mistake but you probably just gave your ex some major trust issues.

I’m never going to be able to convince people not to share passwords, but I hope I can counsel you to treat a password like a house key. You wouldn’t go into your ex-boyfriend’s home and look around, right? (If you would, you have bigger problems than I can help you with right now.) Invading someone’s digital account is the same thing morally as poking around in their physical property (although, tell that to the NSA, right?) You know when someone’s given you their blessing to log on and check something out it doesn’t give you carte blanche to look at every e-mail they’ve written. Be respectful. If you had continued to snoop around or sent messages from his account, you could be in bigger trouble.

Dear Miss Netiquette: My husband got an Instagram account and gets to see all of our kids’ pictures. I don’t want one myself, but is it OK if I just go on his from time to time and comment? He said that’s fine but my daughter says it’s bizarre.

It is kind of bizarre. You’re trying to have your “I’m-too-good-for-Instagram” cake and eat it, too. I can see if you really only want to look at pictures occasionally, but if you think you’re going to be logging in once a week or even once a month, just get your own account!

Missing children alerts are coming to your Instagram feed
Will Elon Musk give media the wake-up call they (we) need
Apparently, Jack Dorsey regrets killing Vine. We miss it too
WhatsApp Communities want to be your private social media
Elon Musk officially owns Twitter now: a timeline of how we got here
How to use Twitter Advanced Search
Twitter to start charging for verification mark, reports say
Having trouble accessing your Instagram account? You’re not alone
Elon Musk considers bringing Vine back from the dead
Staying on Twitter? Here are two ways to make it easier
Elon Musk now Twitter CEO after firing entire board
Twitter Blue is losing Ad Free Articles and Musk’s latest tweets indicate further changes
Clear Mode on TikTok: Here’s what it is and how to use it