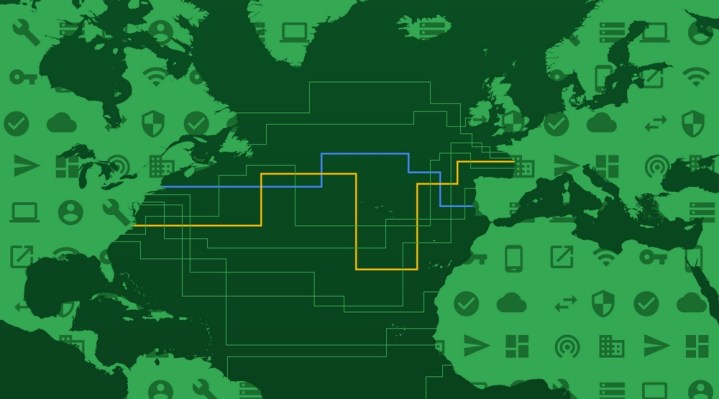 France and Virginia will soon be connected — all in the name of better internet service.

In a statement this week, Google announced that it would be constructing an undersea, transatlantic cable that will span 4,000 miles of open ocean, from Virginia Beach to the French Atlantic coast. The project is expected to be completed and fully functional by 2020 and is meant to help with the expansion of Google Cloud. Moreover, Google says that web traffic across the Atlantic is now particularly busy, which makes the timing and placement of this new cable particularly appropriate.

The U.S. landing of Virginia Beach is also convenient: The company has plans for a data center in the northern part of the state. This won’t be the first internet cable to call Virginia Beach home, for the record; just last year, a cable between Virginia Beach and Bilbao, Spain also went into operation. That particular project was a joint effort among Microsoft, Facebook, and telecommunications firm Telxius.

Underwater cables serve as the major carriers of the internet, and are responsible for the vast majority of the world’s digital traffic — 90 percent, to be exact. Google’s latest private subsea cable (named Dunant after the first Nobel Peace Prize winner and Red Cross founder, Henri Dunant), will add “network capacity across the Atlantic, supplementing one of the busiest routes on the internet,” noted Google’s Jayne Stowell, a “strategic negotiator,” in a blog post.

The Dunant is the second private subsea cable project Google has taken on. Its first was named Curie, and the name of its third (if it’s built) will follow the same alphabetical scheme, and begin with an “E.” So why has Google chosen to take on these projects independently? The company explained that there were three major considerations: first, performance and latency; second, customer needs with regard to capacity; and finally, guaranteed bandwidth for the lifetime of the cable.

Google notes that all of its investments in internet cables seek to satisfy the same goals: “helping people and businesses can take advantage of all the cloud has to offer.” The tech giant added, “We’ll continue to look for more ways to improve and expand our network, and will share more on this work in the coming months.”