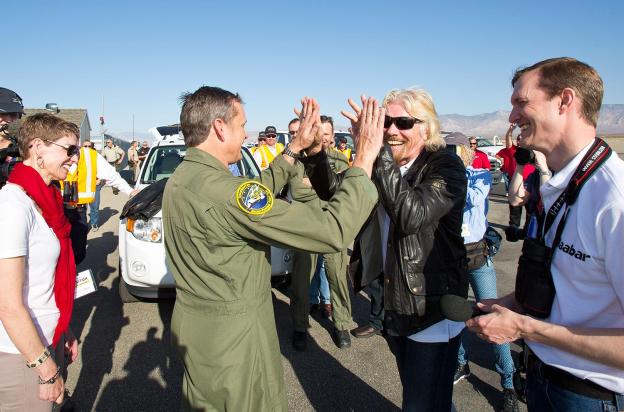 What do you get for a man that has everything in this world? Apparently, a trip to the next one. Sir Richard Branson, the billionaire owner of Virgin Records, Mobile, Airways, Sideways, and everything else under the sun recently made a big leap forward in his goal to take tourists into space. Why? Well, because he can!

Last week in a test flight, Virgin Galactic’s space plane fired its rocket engine for the very first time. After being carried 46,000 feet aboard the mothership aircraft White Knight Two, the plane was released and fired its rockets for 16 seconds, reaching a speed of Mach 1.2, faster than both the speed of sound and my last form of air transportation – but just barely.

Such a monumental leap in the 7-year project to bring commercial flight to space has Sir Richard Branson believing that he will be able to launch by 2014 the 500 people who have graciously paid for their tickets in advance. You too could’ve been one of the pioneering group of space passengers, if you had enough foresight … and about $250,000 burning a hole in your pocket. According to his Sir-ness, the 3-hour flight will instantly double the number of people who have ever been in space (although there’s room for debate on that point). A 3-hour tour, you say? What could possibly go wrong?

After the Space Shuttle program ended in 2011, Earthlings inspired by our quest to discover “what’s next” and interested in manned space exploration have turned to the only resource we have left in this economy: super rich guys. Sir Richard isn’t the only private enterprise attempting to boldly go where only governments (and chimps) have gone before. To recap for those who aren’t scoring at home …

In 2006, Jim Benson, SpaceDev founder, announced he was founding Benson Space Company with the intention of being first to market with suborbital personal spaceflight launches, using the vertical takeoff and horizontal landing Dream Chaser vehicle based on the NASA HL-20 Personnel Launch System vehicle. Benson died in 2008, but the Dream Chaser is still in active development.

Of all the gazillionaires trying to be the first ‘chap to hit the back 9 on Jupiter, only Branson looks the part.

Also in 2006, Bigelow Aerospace – a company founded 8 years earlier by Robert Bigelow and his fat pile of cash from owning the Budget Suites hotel chain – launched Genesis 1, a scaled down model of the company’s inflatable “space habitats.” Cheekily referred to by some as “space hotels,” the Bigelow units are intended to eventually make up the first privately owned space station.

And just this past December, the Golden Spike Company announced plans to privately transport space exploration participants to the surface of the Moon and return, beginning as early as 2020.

But none have garnered more interest and publicity than Branson, which is odd because he usually prefers to remain outside the public eye.

But you have to applaud the man for putting his money into something original. Most men of his means would buy something dull like a sports team … or an election. It makes sense that Sir Richard would focus attention on the next wave of flight. After all, he’s already revolutionized commercial air travel by making flights more tech friendly and more … um … “friend” friendly (wink wink). And I can’t be the first one to notice that, of all the gazillionaires trying to be the first ‘chap’ to hit the back 9 on Jupiter, only Branson really looks the part.

And if he is successful (and who among us has any doubt that he will be?) will he be a benevolent protector or Hugo Drax? His goatee should make us all uneasy about his leanings.

But if he is to rule the galaxy with an iron fist, so be it. We get what we deserve. When we no longer provide public funds for manned space exploration we leave it to the rich guys to step in, and we shouldn’t be shocked that their motives are less about the public good and more about how to monetize it. That’s not their fault; it’s ours. When we stop making science research and education a priority, we turn Space into Space Mountain for the uber-rich.

Now if you’re a kid staring up at the stars, dreaming of visiting another world, you don’t dream of being an astronaut. You hope to get super wealthy so you can afford a drive by of Venus on Virgin Galactic. Just don’t blow your whole wad on the ticket, kid, ‘cause meals cost extra.