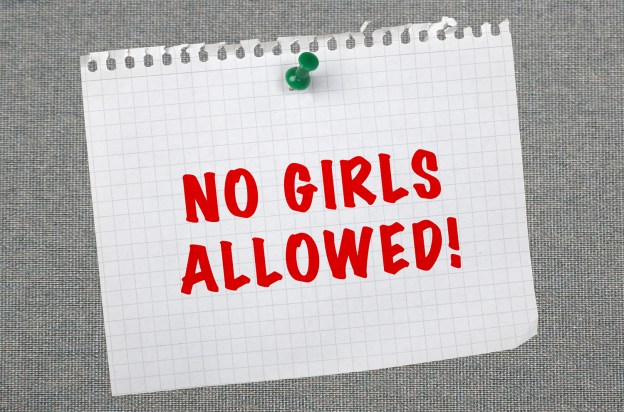 At the beginning of March, Sheryl Sandberg – current COO of Facebook and likely our second female president – released a book titled, Lean In: Women, Work, and the Will to Lead. For some reason, her message that women shouldn’t shy away from being as aggressive as your male counterparts in business ruffled feathers. As someone who loves his senior-executive-who-doesn’t-take-shit-from-anyone wife, I found the response puzzling. What are women supposed to do? Shrink like violets? Hasn’t everyone seen “Working Girl?”

Let me explain before you tell me I’m not pretty enough.

But then I read about Adria Richards, the female developer who got fired for tweeting photos of men that were making sexual comments at a convention . Now, I’ve been known to appreciate a good dick joke, but please help me understand the firing offense because I don’t get it. If she was wrong and shouldn’t be offended by the jokes, then what’s the harm in outing the people that told it? Shouldn’t they be proud? And if she was right and the jokes were offensive and wrong, then shouldn’t we be thanking her?

And then there was the Samsung S4 announcement heard ‘round the world. Beginning with some arched eyebrows at the company’s gender tone-deaf New York extravaganza, the company flat-out appalled in South Africa, where the launch featured women in bathing suits dancing for no apparent reason (or no apparent reason related to the technology, anyway). Once again, I love a good swim, but come on. There’s a time and a place. The time is up for debate, but the place is most certainly the water.

Rounding out the month was our own Molly McHugh, who wrote an appropriately withering piece about Complex Magazine’s asinine “Hottest Women In Tech” article, and paid the price for such opinionating with a depressing barrage of ignorance in the comments section.

I’d tell Complex to do a “Hottest Men In Tech List”, but let’s be honest, we’re a pretty shallow pool to choose from, which brings me to the root of the problem. Maybe the men in the technology industry don’t get it because most of us spent more time playing video games and working on the computer than dating. The cool cache that’s attached itself to tech in the last 5 to 7 years is an entirely new phenomenon for an industry that spent the first 30-some-odd years defiantly nerdy and overwhelmingly male.

That’s not an excuse, it’s an explanation, and it’s certainly one with a lot of holes. But if nothing else, maybe it’s a call for all of us to look in the mirror and ask if we’re part of the problem.

The tech industry is not the only one with problems of misogyny, but we tend to think of those as Ole Boys Clubs like the auto industry or sports. But tech is a young industry and, generally speaking, forward thinking. The whole point is that the industry is predicated on the future, not the past. But we’ll never reach our full potential to achieve great things when half of our workforce is harassed whenever they speak their minds. Let’s leave the dick jokes to the comedians, the bathing suits to the swimming pools, and take Sandberg’s advice: The next time a woman in tech has something to say, lean in and listen.

‘How and where do I vote?’ Google is making it easier to find out
Tech companies doing their part to get out the vote
Rosario Dawson on politics, youth, why the Internet is making us cavemen again
Why did Facebook turn on Safety Check for Paris and not Beirut? Zuckerberg explains
How to find archived emails in Gmail and return them to your inbox
How to sync your Outlook Calendar with your Google Calendar
How to block an email address in Gmail
How to easily log in to multiple Gmail accounts at once
How to change your Yahoo password
How to download Vimeo videos to your PC and phone
Kaspersky VPN should be your go-to for secure connections and privacy
Here are two awesome Santa trackers that kids can use today
Install these Chrome extensions on your relative’s new laptop