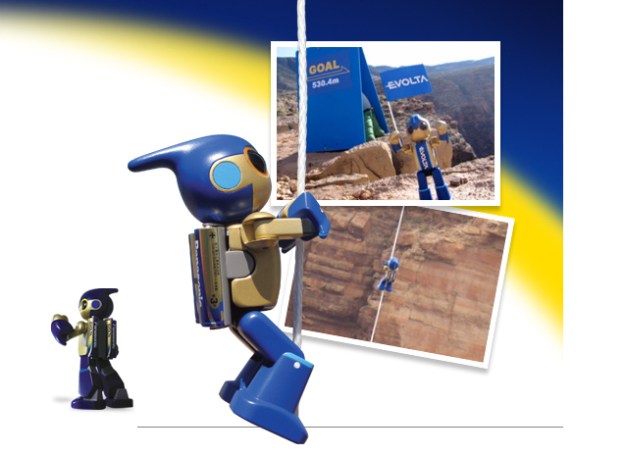 A small battery-powered robot made by Panasonic will be put through its paces next month when it takes on a testing Ironman triathlon course in Hawaii.

The stunt being performed by the Japanese-made robot is intended to promote Panasonic’s latest set of batteries, which the Japanese electronics company claims can be recharged around 1,800 times using a special recharger pad.

As reported by Reuters, Panasonic’s Evolta robot has already climbed the Grand Canyon and spent 24 hours driving around the Le Mans racetrack – but the triathlon could be its toughest challenge yet.

Ironman triathlon courses are among the world’s toughest, involving swimming, cycling and running across a distance of some 140 miles (225 kilometers).

It’s thought it’ll take Evolta up to 168 hours (an entire week) to complete the course – ten times longer than a human competitor. But when you consider the robot is about a tenth the size of your average human, it kind of makes sense.

Tomotaka Takahashi, the creator of the tiny robot, said of the triathlon: “This is very tough even for a sportsman, but I think it is worth a challenge. The robot will encounter a lot of hardships on its way, but I hope it will overcome them all and succeed in the end.”

But the challenge isn’t all about battery power – the people behind Evolta have had to design three Evolta ‘bodies’, one for each task. One will see Evolta on the back of a suitably-sized bicycle, while another (for running) has it inside a kind of “hamster wheel” for stability.

According to Reuters, the ‘swimming Evolta’ (pictured) will be “mounted on a curved, fin-like blade with its arms stretched out.” Panasonic even gave a demonstration in a miniature swimming pool at a press conference held in Tokyo on Thursday announcing the challenge.

While we think it’d be fun to see Evolta on the starting line alongside the human competitors when the actual Ironman World Championship takes place early next month, the diminutive robot will be going it alone, starting on October 24.

To take on Zoom, Google Meet goes free for everyone

Will robots take your job? Website estimates which jobs will be automated