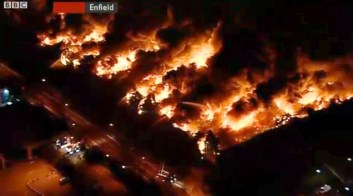 For poor ol’ Sony, it seems if it’s not one problem, it’s another. A few months after it dealt with a massive security breach which saw the personal information of millions of PlayStation Network users stolen by hackers, looters break into its only UK warehouse for CDs and DVDs and then burn it to the ground.

The fire broke out at the company’s north London distribution center on Monday night as social unrest spread across parts of the city for a third night. Dramatic TV pictures showed a large blaze at the warehouse in the city’s Enfield neighborhood. Sony said no injuries had been reported at the site.

According to a Reuters report, the Japanese company announced early Tuesday that deliveries of music, games and movies on CD and DVD to addresses in the UK could suffer as a result of the incident at the three-storey, 20,000-square-meter warehouse.

Sony spokeswoman Yoko Yasukochi said, “There will likely be some impact on deliveries.” She continued, “We cannot determine the cause of the fire or the extent of the damage yet because it’s not possible to enter the building.” Judging by the ferocity of the fire, it seems like there won’t be a building to enter to once the flames have been put out.

It’s thought that deliveries of items other than CDs and DVDs will not be affected. An eyewitness had earlier reported seeing looters fleeing the building clutching game consoles, and while there may have been a number of these kept at the warehouse, large stocks are not thought to have been held there.

Speaking to the BBC, Stephen Kavanagh, the deputy assistant commissioner of London’s Metropolitan Police, said that Monday night’s trouble in the UK capital had caused the police service to be “stretched beyond belief in a way that it has never experienced before.”

The civil disorder began on Saturday night in the wake of a peaceful protest against the fatal shooting by police of a man in Tottenham, north London.

Thai floods cause Sony to delay camera launch, several tech companies affected
Netflix temporarily loses rights to Sony movies
Sony Ericsson Canada admits 2,000 customers affected by latest hack
How to find archived emails in Gmail and return them to your inbox
How to sync your Outlook Calendar with your Google Calendar
How to block an email address in Gmail
How to easily log in to multiple Gmail accounts at once
How to change your Yahoo password
How to download Vimeo videos to your PC and phone
Kaspersky VPN should be your go-to for secure connections and privacy
Here are two awesome Santa trackers that kids can use today
Install these Chrome extensions on your relative’s new laptop
SpaceX launches more Starlink satellites and reveals latest customer count