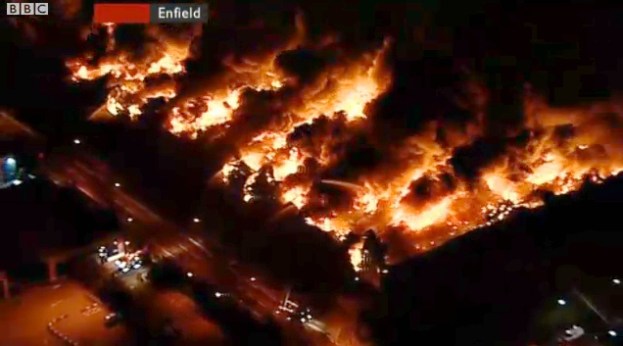 A Sony distribution center has been set on fire in Enfield, north London, during a third night of trouble in the UK capital. Firefighters are currently battling the large blaze.

An employee of a hotel close to the distribution center described to BBC News what he’d witnessed.

“I went around to investigate and saw the door smashed in and a group of about 20 lads just came out with loads of Sony stuff like Wiis and consoles and stuff like that…..and as they were running off one of them punched me,” Tommy Thompson said.

He added: “I went back to work to tell everyone what was going on and a few minutes after that the whole building was ablaze.”

In another call to BBC radio’s Rhod Sharp, Thompson said that the looters escaped from the distribution center on foot and on BMX bikes because “they’re too young to drive.”

Trouble first flared in the city on Saturday night following a protest against the fatal shooting of a man by police in Tottenham, north London.

The social unrest, which some claim has been fueled by social networking sites, has so far involved looting, the starting of fires and attacks on police. It has continued each evening since Saturday’s protest, and on Monday night spread to other parts of the country, including Manchester and Birmingham.

British PM David Cameron and London mayor Boris Johnson are both cutting short their respective vacations to return to the country.

London’s Metropolitan Police, which is deploying more than 1,700 officers to try to deal with the situation, called the ongoing civil disorder “simply inexcusable.”

Court gives the NSA permission to continue phone metadata collection for now
The Google Fiber train continues: Next stop, Salt Lake City
New Sony Pictures movies leaked online following recent hack
Sony fined almost $400,000 for 2011 PlayStation security breach
How to find archived emails in Gmail and return them to your inbox
How to sync your Outlook Calendar with your Google Calendar
How to block an email address in Gmail
How to easily log in to multiple Gmail accounts at once
How to change your Yahoo password
How to download Vimeo videos to your PC and phone
Kaspersky VPN should be your go-to for secure connections and privacy
Here are two awesome Santa trackers that kids can use today
Install these Chrome extensions on your relative’s new laptop