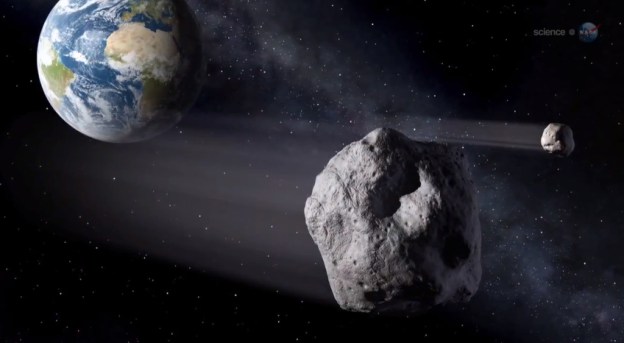 Asteroid 2012 DA14 may currently be hurtling in our general direction at a speed of five miles a second, but the good news it won’t be landing on your home, or anyone else’s for that matter.

And that’s a good thing, for this space rock is 150 feet (45 meters) across – perhaps not a giant as far as some asteroids go, but it would certainly ruin your day if it landed nearby.

According to NASA, the rock, which was first spotted by a team of Spanish astronomers last year, is too small and passing too far from Earth to be seen with the naked eye. However, there are still a couple of ways you’ll be able to witness it hurtling by our planet. First, you can do it the easy way by jumping online. Bareket Observatory in Israel is offering a live webcast of the asteroid’s fly-by. Find out more on its website here.

Alternatively, if you happen to be located in Eastern Europe, Asia or Australasia and have access to a decent pair of binoculars or moderately powered telescope, you might be able to catch it speeding past – provided the sky is clear, of course. One imagines it’ll be rather tricky trying to spot it on its high speed journey through space, but if you like a challenge, this website gives some useful information about preciseley where in the sky you’ll need to look.

Incidentally, a rock of a similar size has impacted the Earth in recent times, landing in Tunguska, Russia in 1908. Fortunately for humans, it came down in a forested area. Unfortunately for the forested area, everything was pretty much destroyed in an area covering 800 square miles.