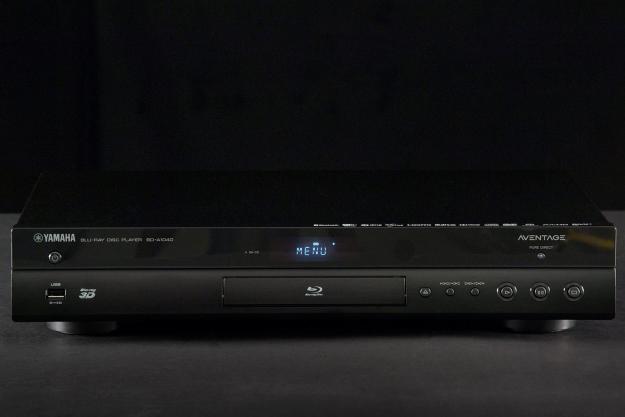 “While it doesn’t knock the Oppo BDP-103 off its perch, Yamaha’s BD-A1040 is a choice option for fans of the premium Aventage line.”

Today’s Blu-ray players offer an unprecedented level of value, and they’re getting cheaper by the minute. Even the big-name manufacturers like Panasonic and Samsung are helping to flood the market with $100 players packed with coveted features like 3D rendering, built-in Wi-Fi, video streaming apps, and high resolution audio playback. So who in their right mind would want to pay more?

That age-old adage “you get what you pay for,” definitely applies here. Budget players will get the job done, but they don’t necessarily get it done well, and how long they will last is always a concern. Audiophiles and videophiles know that when you spend more, you get more, and that’s what has kept premium Blu-ray player makers like Oppo in business.

Like Oppo’s players, Yamaha’s new Aventage BD-A1040 ($400 street price) is cut from a different cloth. Aimed squarely at the audiophile and videophile set, the A1040 looks to compete with the likes of Oppo’s BDP-103, our top pick for a Blu-ray player under $500. Unfortunately, while the Aventage is certainly a worthy adversary, it doesn’t wield enough power to knock the king from its throne.

With its aluminum faceplate and sleek chassis, the BD-A1040 certainly has all the markings of a premium device. Still, while it’s no indictment on performance, we were slightly disappointed with how light the player feels when hoisted from its packaging. Call us old fashioned, but we prefer a little more heft than the unit’s 6.4 pounds, which is feather-light when compared to the Oppo 103’s 10.8 pound steel chassis. Still, the A1040 is a quality device that looks good on the shelf.

A well-stocked connection panel adorns the back of the player, while its gleaming facade bears a USB B input and large push-button controls. Accessories in the box include a thick owner’s manual, a wand-style remote, and batteries.

As a premium player the BD-A1040 is predictably filled to the gills with features, which is in keeping with Yamaha’s Aventage line as a whole. Apart from playback of Blu-ray discs and DVDs, it also has no trouble handling your older SACDs, plus it will play audio and video files via DLNA-compliant servers and connected USB drives. It also incorporates Miracast to read files from any Miracast compatible mobile device, which is a prolific means of mirroring content in the Android world, and something the competing Oppo player does not include.

The A1040 includes support for virtually every video file in the book, including MPEG PS, MPEG TS, MPEG-4, VOB, AVI, ASF, WMV, DivX Plus HD, AVCHD, and MKV files with H.264 encoding. Photo file support includes JPEG, GIF, and PNG . On the audio side, the player’s 32bit/192kHz DAC (digital to analog converter) can handle all the top lossless files including WAV, FLAC, and Apple’s ALAC format at a top 24bit/192kHz resolution. Unlike the Oppo, however, the A1040 doesn’t support the revived DSD high-resolution file format.

As expected, the A1040 also offers support for the top surround sound codecs, including Dolby True Surround Sound HD, and DTS-HD Master Audio. The A1040 can’t quite stand up to its Oppo rival, however, when it comes to hardwired connections.

The BD-A1040 does have its fair share of ports to output sound, including HDMI, Optical and Coaxial digital outputs, and stereo analog audio outputs. Inputs include an Ethernet input, an RS232C port for custom installations, and both input and output connections for remote control of the system via your Yamaha A/V receiver, or slaving another Yamaha component to the device, like a CD player.

However, the Oppo BDP-103 goes much further, tacking on extras like dual HDMI inputs to process audio and video from set top boxes and gaming consoles through its premium components. The Oppo also sports dual HDMI outputs for multiple home audio and video configurations, 2 more USB inputs for a total of 3, as well as 5.1 and 7.1 audio outputs. Sure, the Oppo is a bit pricier, but that’s a whole lot of extra connection options for the money.

Firing up the BD-A1040 engages a very short setup process in which the system simply asks for video resolution and screen size preferences. Menus are lain over a gorgeous shot of a Yamaha grand piano used as wallpaper — but that’s about the extent of the A1040’s graphic amenities. Even for a premium AV device, which are notorious for their simplistic digital interfaces, the A1040 feels pretty bare bones, described by one colleague as the “Linux OS of Blu-ray players.” We came to appreciate its simplicity after a while, but don’t expect a helping hand to guide you through the system.

Why bother offering streaming apps at all if you can’t nail down Netflix?

Unlike the Oppo BDP-103’s icon-based home screen, the A1040’s home page is a threadbare window listing basic media options. The apps page is equally barren, offering only Picasa, Vudu, Youtube, and Dropbox. Notice anything missing? Why bother offering streaming apps at all if you can’t nail down Netflix? Admittedly, Oppo’s list isn’t much better, but at least Netflix is included. While we’re griping, a backlit remote would have been appreciated in a device at this tier, as well.

On the plus side, the Yamaha’s interface is fairly snappy, and smart enough to look ahead, not only informing the user if a disc is in the tray, but also what type of media is present, such as DVD-Audio, or Blu-ray. We also appreciated intuitive features like the on-screen menu, which shows everything from the chapter of the disc to the exact bitrate in real time, helping to showcase the A1040’s premium pedigree.

The real test of a premium Blu-ray player is done on the track, and the A1040 definitely knows how to take the inside lane. Playback of our audio discs was near flawless, offering smooth, vividly detailed audio, highlighted by a lofty upper register, and rich texture across the frequency spectrum as the A1040 pored through our collection of DVD-Audio and SACDs.

When we did an A/B comparison with our Rotel RA-1570, the integrated amp’s DAC seemed to offer just a touch more dimension and fluidity at the top side, illustrated in moments like Jeff Beck’s solo from the song “Because We’ve Ended as Lovers” on Eric Clapton’s Crossroads DVD. Otherwise, hearing a difference required some serious analysis and would, at best, be called nitpicking.

Comparing the Oppo BDP-103 and the A1040 was a similar experience, and few ears will be able to find anything but slim subtleties between the two, though we still tend to prefer Oppo’s ESS 9018 Sabre DAC to the A1040’s proprietary 32bit/192kHz DAC. Either way, the A1040 provides a smooth ride for music and movie soundtrack playback, picking up every nuance and detail along the way.

The A1040 also offered stellar video resolution over a variety of our test discs, delivering crystal-clear images to our in-house display, a Samsung PN60F8500 plasma.

The A1040 offers a smooth ride for music and movie soundtrack playback, picking up every nuance and detail…

However, we were most impressed with the player’s video upscaling to 1080p. As we watched our DVD copy of Star Trek: Into Darkness, we were taken aback by the player’s deft upscaling of the film, displaying a picture far superior to its native resolution.

While the upscaled DVD was no match for the Blu-ray versions, it fared far better than the same disc played through both the Panasonic BDT-360, or the Samsung BD-H6500, both of which gave the impression that we’d lost our glasses when we swapped out the included DVD for its Blu-ray counterpart.

While Yamaha’s BD-A1040 offers sterling playback performance, the Oppo BDP-103’s position as Prince remains safe. The A1040’s slimmer suite of connections and bare-bones interface keep our vote in Oppo’s camp as the best of the best for mid-tier Blu-ray players. That said, Yamaha’s player comes in at $100 less than Oppo’s BDP-103, and is an easy choice for fans of the Aventage line.

Microsoft Edge has a new trick for increased performance
Chromebooks might get another great feature from Windows laptops
Microsoft Teams may liven up meetings with casual game integration
iPadOS 16: Everything we know about the iPad’s next update
This startup claims to have unlocked the secret to speedy CPUs
SpaceX Starlink internet heads to first cruise ships
We really didn’t expect these two new contraptions from LG
There’s a problem with those amazing Ryzen 7000 benchmarks
Halo Infinite Season 3 delayed until 2023, split-screen co-op canceled
Apple’s antivirus strategy for Mac has gone fully preemptive, but is that enough?
Intel admits to one key regret about its launch of Arc GPUs
Here’s why you need to update your Google Chrome right now
Malware has a terrible new way to get to your computer