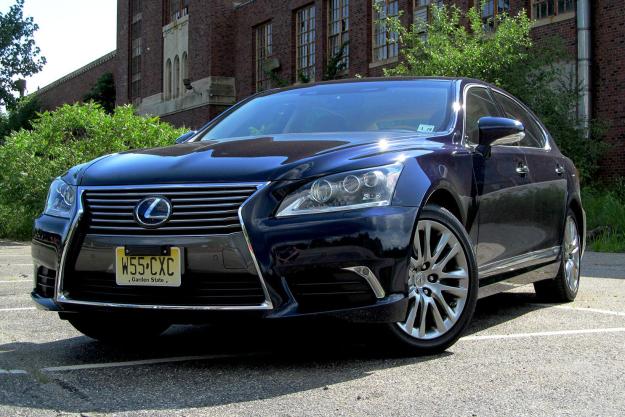 “The LS600 would make an excellent limo. The relaxed driving dynamics and seemingly infinite rear legroom make it the perfect car for people with chauffeurs.”

It’s rare to hear the Lexus LS and Acura NSX mentioned in the same breath, but both cars have accomplished similar goals.

When it debuted in 1989, the LS asserted the power of the Japanese car industry by trouncing the Mercedes-Benz S-Class in quality and reliability, just as the NSX stuck it to Italian exotics like Ferrari by proving that a supercar doesn’t need to hemorrhage oil and torture its driver to be super.

Fast forward to 2013, and the LS has become an established player in the full-size luxury sedan segment, carrying the Lexus flag into battle against the S-Class, Audi A8, BMW 7 Series, and Jaguar XJ.

Is this 21st century Lexus a world-beater, like the original? We grabbed the key fob of a top-of-the-line LS600h L to find out.

Best of both worlds?

Most carmakers put a big V12 in the most expensive version of their most expensive car, but Lexus decided to go green and make the LS600h L a hybrid (hence the h, the L denotes the car’s long wheelbase).

The silence afforded by electricity does wonders for the driving experience.

The V8 produces 389 horsepower and 385 pound-feet of torque, while the electric motor contributes 221 horses for a total system output of 438.

The EPA rates fuel economy at 19 mpg city, 23 mpg highway, and 20 mpg combined. In theory, the hybrid powertrain should give the LS600 the power of a V12 and the fuel economy of a smaller engine.

Lexus owners won’t be able to brag to their golf buddies about ultimate horsepower or mpg, but the LS’ hybrid heart does start to make sense once you press the start button.

Pressing that button doesn’t cause a savage roar to be emitted from the engine compartment; if the gauges and infotainment screen didn’t flicker on, it would be hard to tell that the LS600 was actually running. That’s because, like all hybrids, it can operate on electricity alone.

The silence afforded by electricity does wonders for the driving experience. It’s not very dramatic, but there’s a reason why carmakers spend so much money on sound deadening. Luxury car buyers, especially those who go for enormous barges like this one, want a bit of serenity.

The LS600 delivers that in spades. Running on batteries, the loudest noise is the air conditioner. Even when the gasoline engine is on, it tends to hover around 1,500 rpm while cruising, not calling any attention to itself.

Work that engine a little harder, and the LS600 feels every bit as quick as its claimed 5.6-second 0 to 60 mph time as a wave of torque pushes you past lesser cars wallowing in the right lane.

It’s easy to be overwhelmed by the LS600’s bulk, but it handles reasonably well for a large car, negotiating twisting back roads and McDonald’s drive-throughs without causing too much unease. From behind the wheel, drivers will notice the controls’ relaxed response and, while we’d always prefer something a little sharper, it’s totally appropriate for this type of car.

The air suspension and electric power steering follow the same beat as the smooth-but-silent powertrain. The controls are responsive, but this is definitely more of a boulevard cruiser than a Nurburgring taxi. That V8/electric motor combo might be able to summon brief bursts of torque for quick acceleration, but the rest of the chassis is quick to remind the driver of the LS’ true mission.

The LS600 also comes with a choice of driving modes that alter different vehicle parameters.

Eco Mode turns the gas pedal to mush, and is best saved for emergencies. Comfort splits the difference between Eco and the default Normal, and Sport S and Sport S+ are, well, sporty. The biggest difference between the normal and “Sport” modes is replacement of the standard economy gauge (it swings from “Charge” to “Power,” depending on the engine’s mood) with a tachometer. From the driver’s seat, the difference isn’t really apparent.

There’s also an EV Mode that requires you to drive as if the throttle was an eggshell. The best bet is to leave things in Normal Mode.

A blind spot detection system, with illuminated signals in the side view mirrors,  and Lexus’ Park Assist, which produces a chirp when the LS gets too close to another car or a land mine while parking. Both features perform as advertised and are genuinely helpful when maneuvering this titanic ride in tight confines.

Of course, drivers may not even want to go anywhere in their LSes because the cabin is a very nice place to be, even while you’re sitting in traffic.

The optional Mark Levinson Reference sound system brings 19 speakers and 450 watts to the party, and there are plenty of ways to fill it with tunes.

The seats are comfortable, and the car feels twice as spacious inside as it appears from the outside. That’s particularly true for rear seat passengers: our long wheelbase version had enough rear legroom to ensure that passengers’ knees will never even be in the same time zone as the backs of the front seats.

The interior doesn’t have the avant garde design of an A8’s or XJ’s, but it is functional. The instrument panel and 12.3-inch infotainment screen are easy to read, and Lexus’ Remote Touch Interface controller is among the most intuitive of its kind. The mouse-like design has some tactile feedback and moves from button to button automatically, making screen navigation faster.

Our review car was veneered with the optional bamboo trim which contrasted nicely with the tan and gray interior fabrics and the Deep Sea Mica exterior. Also, unlike the wood trim in many other cars, it looks and feels like it actually came from a tree.

The optional Mark Levinson Reference sound system brings 19 speakers and 450 watts to the party, and there are plenty of ways to fill it with tunes. Drivers have a choice of: AM/FM/satellite radio, USB, wireless syncing through Lexus’ Entune system, or the Enform App Suite, which includes music streaming services like Pandora.

Still, all of those infotainment functions can be distracting. Luckily, Lexus included a second set of climate and audio controls in the rear center armrest for a co-pilot to operate. Or, better yet, you could stay in the back and hire someone else to do all of that pesky steering and braking for you.

The LS600 would make an excellent limo. It’s relaxed driving dynamics, plus the seemingly infinite rear legroom, make it the perfect car for people with chauffeurs. With those comfy chairs and control of what’s being piped through the speakers, it really does seem like Lexus designed this car from the back forward. Once you’re actually sitting back there, the temptation to never leave and spend the rest of your life trading in bundled mortgage derivatives is strong.

Even further back, the trunk is deceptively small. It should be able to handle a suitcase or golf bag, but it couldn’t accommodate a mini fridge that needed transporting (the mini fridge, of course, being an industry-standard unit of measurement).

Once your ensconced in that leather-and-bamboo lounge, it’s easy to forget about what the LS actually looks like, but no one wants to look vapid in front of the proles.

The unwashed masses will probably be gaping at the LS600’s size. It’s long wheelbase and relatively tall stance give it a lot of bulk, making it look a bit like an angry taxi.

Eagle-eyed carspotters know that this LS is actually a facelift of the 2007-2012 model, sporting Lexus’ new “Spindle Grille,” LED headlights, and taillights with L-shaped elements.

That’s not a bad thing though; the 2013 LS wears its facelift well. It’s not a fashion item like the Jaguar XJ, but there’s something to be said for Lexus’ more subtle design tactics. This is a car that shouldn’t look good, but it does.

When the original LS400 launched at the end of the Cold War, it redefined what a luxury car was. The 2013 LS600h L does not do that, and if buyers can get over that fact, they should be more than satisfied.

From the hybrid powertrain to the tech to the styling, the LS does many things well, but it won’t be making any headlines. For a flagship car that starts at $119,910, that’s a problem. Owners want to have the latest and greatest, and carmakers want a vehicle that can lend its prestige to the rest of the lineup.

The LS600h L isn’t an image maker, but it is a very good luxury car.