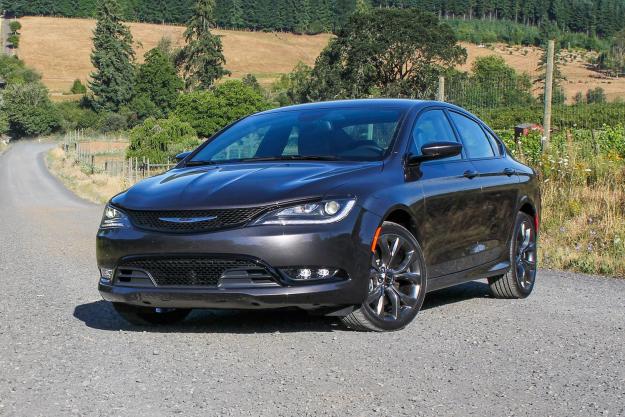 “Rarely has one generation of car been so different from what came before. The original Chrysler 200 went straight to rental fleets, but the new 200S AWD, with its combination of charisma, power, and style has gone straight to our hearts.”

No car represented the downfall of Chrysler better than the Sebring, which was re-badged as the first-gen 200 in 2011.

In its first generation, the 200’s highest achievement was becoming the backbone of the American rental fleet. Now the second generation is here, and if the original 200 represented Chrysler’s downfall, then the new generation symbolizes its rebirth. In fact, thanks to a combination of charisma, value, and downright fun the 2015 Chrysler 200S is my favorite all new car this year.

Glory behind the wings

The heart of this amazing transformation is what lies beneath the sinuous bodywork and slim Chrysler wings. The previous 200 was, as I mentioned before, based on the Sebring; a car so old it needed a hip replacement.

The new 200 is based on an Alfa Romeo Giulietta, that – like any good Italian – wants to either kiss you or punch you in the face.

After being worked over by Chrysler’s best and brightest, some of the Alfa feistiness is gone, replaced with poise. The combination of Italian fire and American practicality (we have that right?) is something a bit unique and very special.

Under ordinary conditions, the 200S is docile and comfortable. If the driver puts the hammer down, everything changes.

For starters there is the noise. The 3.6-liter Pentastar V6 sounds like something out of an old Maserati, a baritone roar that turns into a tenor howl. Most choirs don’t sound as tuneful, and in a $33,470 midsize car, this soundtrack isn’t just a delight, it is a complete surprise.

The 200S isn’t all bark and no bite either. That howl is the sound of 295 horsepower, and 262 pound-feet of torque. Despite being held back by a nearly 4,000 pound curb weight in the all-wheel drive 200S guise, the Pentastar actually feels more powerful than those numbers suggest. Chrysler hasn’t made 0 to 60 times available, but I would guess that the 200S can make the sprint in around 6.0 seconds, or maybe just slightly less.

The 200S is docile and comfortable. If the driver puts the hammer down, everything changes.

Like a good tailor, the suspension hides the 200’s weight. The sport-tuned suspension and super-stiff aluminum attachment points manage to keep the car flat and nimble in the corners without shaking any loose teeth out of passengers’ skulls on the bumps. I guess you could say the 200S handles like a running back: big but graceful.

The steering is pleasantly heavy, and offers a good sense of wheel position, though it could be a little more communicative in tight bends.

Where the 200S really comes alive is in Sport mode. Unlike a lot of cars sports settings, which just turn the transmission efficiency down, the 200S actually makes some serious changes. The clutch connecting the front and rear axles engages sending more power to the rear and the traction control turns off. In this mode, the car gets truly lively and it is possible to break the rear end loose.

Like the 200’s little brother, the Dodge Dart, I found driving this Italian immigrant a truly rewarding experience. There were enough electronic nannies to keep me from killing myself, but not so many that I felt like I removed from the driving process. For what is in essence an everyday midsize car, the Chrysler 200S drives like a sports sedan; it’s an amazing breath of fresh air.

The one dynamic problem with the 200S is its nine-speed transmission. Having nine gears is a bit like having nine wives. In theory more is better. In practice, however, the result is just a lot of yelling.

At city driving speeds, the transmission is constantly changing gears. When trying to shoot forward to nab a gap in traffic, the transmission will hesitate as it tries to decide if it should downshift two, three, or even four gears.

Sport or manual shift mode cures a lot of these problems, but hurts the mileage, which at a combined 22 mpg doesn’t have a lot of wiggle room.

But what really makes the transmission frustrating is that it really doesn’t seem necessary. During a week, and more than 500 miles of driving in the 200S, I would guess that the car was in ninth gear for less than 20 minutes.

Even at 75 mph, the car settles in eighth gear, because, in ninth, the engine would essentially be napping at 1,500 rpm. That’s good for fuel economy, but out of the torque band. In fact, I found that I had to put the transmission in sport and lock it into manual shift mode to squeeze a few extra mpg out in ninth.

Uconnect is still worth talking about

One of the curses of developing a truly good infotainment system is that after journalists are done praising it, it gets taken for granted. But Chrysler still deserves credit for what is one of the best systems on the market, and certainly the best that doesn’t come from a luxury automaker.

Inside and out, the Chrysler 200 is a great car to look it.

The beautiful thing about Uconnect is that no function is more than three clicks away – pairing a phone literally requires touching the screen twice. No matter what “app” is up, it is always possible to get to any other function at the bottom of the screen. This means no screwing around to get back to a home screen and then where you want to go.

It seems simple, but many systems don’t have this figured out.

I was reminded of this when on a road trip to Seattle. My wife was confidently operating the 8.4-inch touchscreen within ten minutes. Her daily modes of transport include a motorcycle with three moving parts and a 20-year-old Volvo. Neither of which, one might rightly presume offers neither “info” nor “’tainment’”. So it speaks well of the Uconnect system that a person with no previous exposure to the setup can operate it with ease almost instantly

In fact, the only tech drawback of the 200S is its lack of adaptive cruise control, which is included in the more luxury-minded 200C

A special place to be

Inside and out, the Chrysler 200 is a great car to look it. The basic shape is handsome, if not exactly unique. However, the key to the Chrysler’s looks is the details. And with the right combination of colors and options, it can be positively sinister.

The 200S’s interior was clearly the product of actual designers.

My press demonstrator featured LED running lights, sexy but pricy $695 “Hyper Black” 19-inch wheels, and a color Chrysler calls ‘Granite Crystal’, which I lovingly nicknamed ‘Mafia suit gray’. The LEDs help set off the pallet of shiny but muted colors and matte black trim. As a result, the car looked like it wanted to mug passersby.

In fact, the 200S was a surprising attention grabber. While photographing the car on an Oregon backroad, an fellow who looked like an extra from the show Sons of Anarchy pulled up on his Harley. He looked at me and the car with an intimidating squint, paused, and gave me the thumbs up before roaring away. It’s not just people who might want to kill you and eat your skin who love the 200S, though. While driving through a trendy Seattle neighborhood, multiple groups of people stopped and pointed at the Chrysler as they crossed the street, obviously trying to figure out what it was.

However, the best part of the 200S’s styling is the interior. From the sweeping jet-fighter center console, with its futuristic radial shifter, to the striking instrument cluster, the 200S’s interior was clearly the product of actual designers. Even the leather-trimmed cloth seats have been worked over by someone with an eye for design. The result is an interior that is not only attractive and interesting, but, thanks to luxury features like heated seats and steering wheel, surprisingly comfortable to boot.

In short: the 200S is the first Chrysler I have seen in a while that makes me feel like I was in the presence of something special.

So what to make of the 200S? Yes, it is stylish. Yes it is practical. Yes it is fun to drive. But it is also something more. The 200S is a car with charisma.

Part of that charisma comes from its price. Sure, for less than $34,000, the 200S may not be cheap, but it is an excellent value. Pulling up next to someone in his or her Audi A4 or BMW 3 Series, while behind the wheel of the 200S, I felt like I was in on a secret. Those are great cars, but buying one means paying out not just the nose, but every other orifice, too.

The Chrysler does 95 percent of what those cars do. Not only does it cost $10,000 less but it is also a far more interesting choice. No one is going to point out an A4, or stop to give a 3 Series driver a thumbs-up – though they might make some other hand gestures.

That is why I can say that not only do I love the 200S, I might spend my own money on it – but not until Chrysler removes two of those transmission gears.